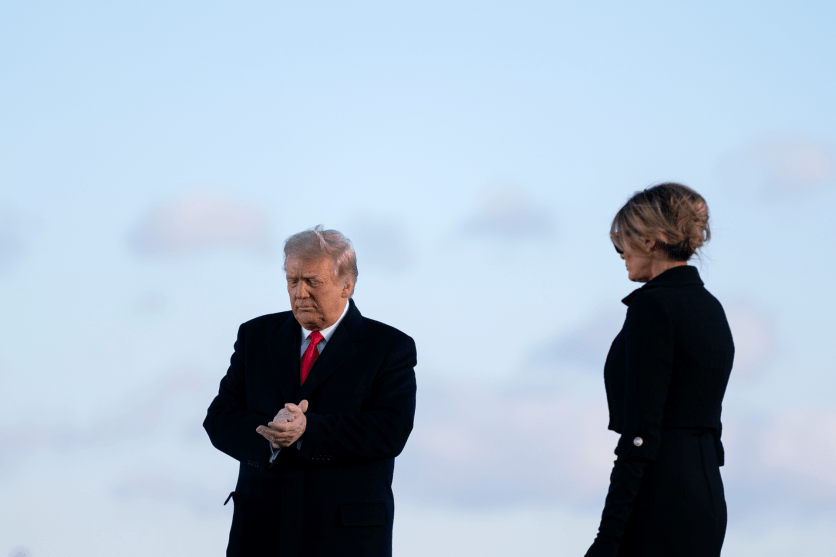 The second impeachment trial of President Donald Trump begins on February 9. And as of now Trump doesn’t appear to have a lawyer for it.

On Saturday, the former president parted ways with top lawyers Butch Bowers and Deborah Barbier in a “mutual agreement,” according to the New York Times and CNN. The other lawyers on Trump’s team, including Josh Howard from North Carolina, split too. In total, five lawyers bailed. The squabbling was for the same reason as usual: Trump would not let anyone argue anything except that he won the election. Whatever the case, Trump seems to be without a coherent legal team. He needs to file a response to the House’s impeachment proceeding by Tuesday.

That could be a big problem for him. As Mother Jones reporter Russ Choma has pointed out, Trump’s many post-presidential perks will go away if he is convicted. Trump would get to keep his Secret Service detail, but the rest—“a pension, access to health insurance, office space and staff”—aren’t guaranteed.

We didn’t get the chance to know this latest batch of lawyers very well—they left almost as soon as they were appointed. But it’s worth recalling what we know about the previous batch.

The best-known, of course, is Rudy Giuliani, who represented Trump against claims that he collusion with Russia to interfere in the 2016 election. Guiliani famously played a key role in the Trump administration’s efforts to coerce Ukrainian officials into producing dirt on Joe Biden, efforts that culminated in Trump’s first impeachment—and subsequent acquittal in a Republican-controlled Senate. Giuliani then dove whole hog into the 2020 post-election madness, falsely claiming Trump had won. In the process, as we have reported, Giuliani may have perjured himself. He cannot represent Trump in the second trial because of his alleged complicity in helping to incite the January 6 raid on the Capitol—behavior for which he could potentially lose his license to practice law.

Well, there’s Lin Wood, who, in addition to Trump, has represented Rep. Marjorie Taylor Greene, the McCloskeys (the St. Louis couple who emerged from their mansion and pointed loaded guns at protestors), and Kyle Rittenhouse (the conservative kid from Illinois who was charged with murder after he shot and killed two protesters this past August). Wood’s exploits have been chronicled at length by Mother Jones reporter Samantha Michaels, who wrote this now prophetic line:

One of Rittenhouse’s other attorneys, L. Lin Wood, has been pushing a conspiracy theory to his 191,000-plus Twitter followers that liberals are planning a violent coup against the White House, and that freedom-loving Americans will need to fight back.

Wood was part of a “very swampy” Trump crew, as Dan Friedman wrote:

Former GOP Rep. John Sweeney, who is assisting the Trump team’s efforts, is registered to lobby for multiple Russian entities. Former Florida Attorney General Pam Bondi, who is involved in the Trump team’s effort to challenge the vote-counting process in Pennsylvania, works for a leading Trump-connected lobbying shop and is a registered foreign agent for Qatar. Corey Lewandowski, the one-time 2016 Trump campaign boss, works for a firm whose lobbyists represent foreign and domestic clients with interests in Washington. Lewandowski has said he personally does not do lobbying work.

Before them, representing Trump in his first impeachment proceedings, came Jay Sekulow, who, as David Corn, reported, has loose ties with the Putin regime. But whoever next joins the illustrious Trump legal crew may not have to do much work. All but five Republicans are already on the record calling the impeachment trail unconstitutional.