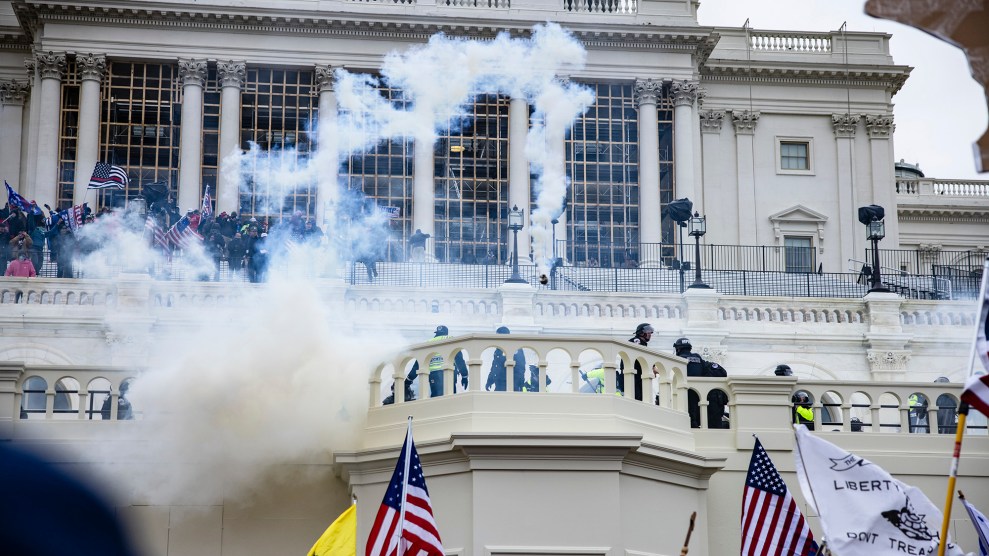 This is what Donald Trump has unleashed upon the United States: an unprecedented act of domestic terrorism.

A violent mob incited by his false claims of a stolen election stormed the US Capitol, causing chaos, smashing windows, vandalizing offices, and forcing evacuations and lockdowns. Vice President Mike Pence, who was presiding over the counting of electoral votes, had to be rushed out of the Senate chamber by Secret Service agents. The Senate floor was cleared, and one pro-Trump terrorist claimed the podium and shouted, “Trump won that election.” Reports emerged of explosions, tear gas, and gunshots. One person was shot and reported killed. An explosive device was apparently found. Senators and House members were told to shelter in place. Capitol police engaged in an armed standoff with Trump’s brownshirts. It was outright rebellion, an attempt at an actual political coup. An outraged Sen. Mitt Romney exclaimed to a reporter, “This is what the president has caused today, this insurrection.”

Trump owned this terrorism. He has whipped up his cultish followers with lies and conspiracy theories. At a rally on Wednesday morning, Trump told his supporters that the 2020 election was a grave crime and that Republicans and Democrats on the Hill were about to destroy American democracy by accepting the results. (During that event, Rudy Giuliani, Trump’s lawyer and chief coup-stirrer, called for “trial by combat.”) Trump directed his frenzied supporters toward the Capitol, where they breached police lines and took over the building. They shut down Congress. They terrorized lawmakers and staff, they fought with security forces, they broke American democracy.

This is all Trump’s doing. He has encouraged violence among his supporters since the 2016 campaign. At his rallies, he encouraged followers to assault protesters and provoked violent threats against journalists. During the Black Lives Matter protests, he threatened to shoot looters. When asked during a campaign debate if he condemned the Proud Boys, violent pro-Trump shock troops, he told them to “stand back and stand by.” Wink, wink. As my colleague Mark Follman has reported, Trump has long played footsie with far-right radicals. Elizabeth Neumann, a former Department of Homeland Security official who focused on counterterrorism and threat prevention, contended in a Washington Post op-ed that Trump has been fomenting violence: “Language from campaign materials and Trump’s extemporaneous speeches at rallies have been used as justification for acts of violence.” His “inconsistent and muddied” criticism of violence and white supremacists, she pointed out, exacerbated the problem: “Extremists thrive on this mixed messaging, interpreting it as coded support.”

By depicting his electoral loss as a theft and profound threat to the nation, Trump signaled to his followers, especially the extremists, that now was a desperate time requiring desperate measures. With such talk, he has become the instigator of one of the most significant terrorist actions in modern American history.

But Trump is not the sole author of this horrific assault on the US government and the citizenry. He has been enabled and supported for years by the Republican Party, Fox News, and other right-wing media, and the conservative movement, even as he fueled hatred and division and his corruptions were repeatedly exposed. They excused his aiding and abetting of a foreign adversary’s attack on the United States. They turned a blind eye to the brazen abuse of power that led to his impeachment. They cheered him, as he downplayed a pandemic, ignored public health guidance, and allowed tens of thousands of Americans to perish in preventable deaths. They remained silent as Trump repeatedly demonstrated he had no respect for democratic norms or the basic norms of decency. They remained silent as he presented tens of thousands of lies and false statements to the American public. Instead, they protected him, they hailed him as their leader.

Shortly before the violence broke out, Senate Majority Leader Mitch McConnell did deliver a speech explaining his decision to oppose Trump’s attempt to overturn the election, and he spoke emotionally about protecting American democracy and preventing it from entering “a death spiral.” This performance came far too late. Trump and his allies had been laying the groundwork for this coup for months. And though blowing up the election was a Trumpian bridge too far for McConnell, he and other Republican leaders had long accepted Trump’s authoritarian rhetoric and moves. Afraid of his base, they empowered Trump and permitted their party to become a cult of personality centered on a pathologically narcissistic wannabe-strongman. We heard repeatedly that they knew better. A few wrung their hands once in a while in response to Trump’s excesses. But they went along, as he led a political movement driven by fear, paranoia, resentment, grievance, and falsehoods. They were chickenshit.

At the same time, Trump and his fans demonized Black Lives Matter and screamed about antifa. Law and order, they shouted (or tweeted). But it is the Trumpers’ assault on Congress that is the most violent political act in decades. And the perps are white people who have been riled up by Trump—and by his handmaids. Before the proceedings were interrupted by Trump’s terrorists, Sen. Ted Cruz, a leader of the GOPers challenging the electoral count, claimed this count had to be suspended because “nearly half” of Americans have “deep concerns” about the election’s legitimacy. That was a lie. It is not nearly half. But more important, those people who have such concerns do so because Trump, echoed by Cruz and other Republicans, has hurled lie after lie about the election results. They created this cauldron. And if the Republicans continue this attempt to subvert the election once order is restored to the Capitol, it will show they are in league with violent extremists to serve Trump and retain power.

After the election, when Trump would not concede, Republican officials, following suit, would not recognize the results. Humor Trump, they said. What harm could come from giving him time to get used to being a loser? Here is the result: Terrorism. The US Capitol under siege. Trump’s troops on the rampage. The United States diminished and disgraced. And Trump, despite pleas from former aides and others, doing little to control the furies he deliberately let loose. He issued one weak tweet asking for calm. He then posted a video in which he asked the rioters to leave the Capitol but reaffirmed the bogus grievance motivating them: the “election was stolen” and “everyone knows this.” He then added, “We love you.” He told the criminal thugs who had overrun Congress that he loved them. He would not repudiate them.

It is easy to declare this day a dark one. But what is truly sad is that it is not at all surprising. Trump has always looked to harness hate. He has always relished recklessness. He has always demonstrated that his only devotion is to his own interests. He has always revealed that he holds no allegiance to democratic values. Yet despite all of that, he was fully embraced by the entire GOP and the conservative world. (At the rally preceding the attack on the Capitol, Donald Trump Jr. proclaimed, “It’s Donald Trump’s Republican Party.” And he was right.) This was more than a deal with a devil. It was an abject surrender to a man of malice. To a bully. To a would-be tyrant. To a president who has become a force of terrorism.