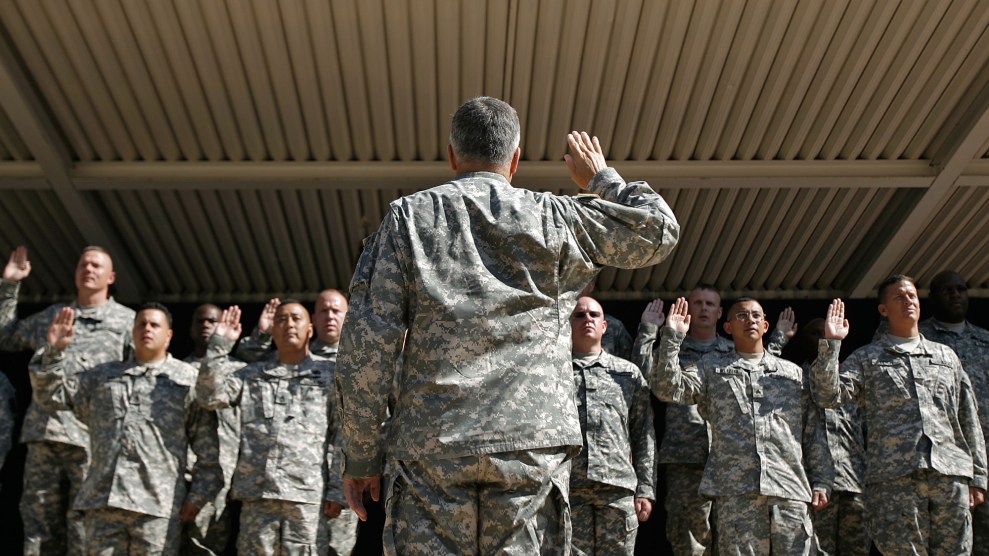 Paulo Bautista started talking to military recruiters in early 2017, after years of dreaming of enlisting. But his plans were derailed a few months later by two early-morning Trump tweets: “After consultation with my Generals and military experts, please be advised that the United States Government will not accept or allow…Transgender individuals to serve in any capacity in the U.S. Military.”

Although the policy didn’t go into effect until April 2019, Bautista, who is transgender, said recruiters refused to work with him. All in all, he tried 15 different recruiters before finding someone willing to help. He met his current recruiter during Biden’s campaign, and they both held out hope that things would soon change. “Once Biden got elected, I still had a little bit of doubt, because, you know, politics are politics, some people backpedal,” says Bautista.

But after five-plus years of back-and-fourth, the transgender military ban saga is almost over. On Monday, President Joe Biden issued an executive order ending the Trump administration’s policy that prevented most openly trans people from joining the armed forces.

“President Biden believes that gender identity should not be a bar to military service, and that America’s strength is found in its diversity,” the White House said in a statement. “America is stronger, at home and around the world, when it is inclusive. The military is no exception.”

Under the Trump administration, trans people who wanted to join the military were forced to stay closeted or stay home. Transgender recruits were only allowed to join the military if they had not been formally diagnosed with gender dysphoria and hadn’t yet transitioned. Transgender service members were expected to meet the fitness and grooming requirements of the sex they were assigned at birth.

Biden has given the Departments of Defense and Homeland Security 60 days to begin enacting the required policies, but the Palm Center, a nonpartisan military research institute, has estimated that since the order is simply a return to old standards—Obama directed the military to allow transgender troops to serve openly back in 2016, and those who enlisted under his policy were allowed to remain on duty—a full turnaround could happen in 30 days or less.

“Once the news broke, I was beyond floored, I was ready to pop a bottle open,” Bautista said. “This is what I’ve been waiting for! I’ve got to call [my recruiter] in a little bit. My next question is like, okay, when do I jump on the bus?”

Kaycen Bradley, another transgender soon-to-be enlistee, told me this policy change makes him hopeful for both his own future, and the future of the armed forces. Trump’s ban didn’t keep transgender people out of the military—using data from the Pentagon, the Palm Center has estimated there are about 15,000 trans service members—it just created a culture that was toxic toward them, and kept many closeted for fear of getting dishonorably discharged. He said an inclusive military is a more effective military.

“They had to hide who they are, which means they’re not at their 100 percent,” Bradley said. “They can’t give their best effort because they’re always worried about something. But now they’re able to be their authentic self and actually give not just the military, but their country, 100 percent of their effort.”

Staff Sergeant Alleria Stanley experienced that conflict firsthand. Stanley has served in the army for 18 years, and came out at work shortly after the Obama policies went into effect.

“It’s very difficult,” she said. “You’re living two lives with two genders. At work, you’re one gender and at home, you’re another gender. The consistent and constant flip-flop, back and forth is a an emotional and mental drain. There’s also fear that someone might discover that you are transgender, and then everything you’ve worked for is gone. It’s very frightening, you’re always worried who’s gonna know, whom can I trust? And that is no way to live, much less serve one’s nation.”

Stanley said even with Biden’s repeal of the ban, it’s going to take some time to repair the relationship between the military and the LBGTQ community. But she, Bradley and Bautista were all enthusiastic about doing that work.