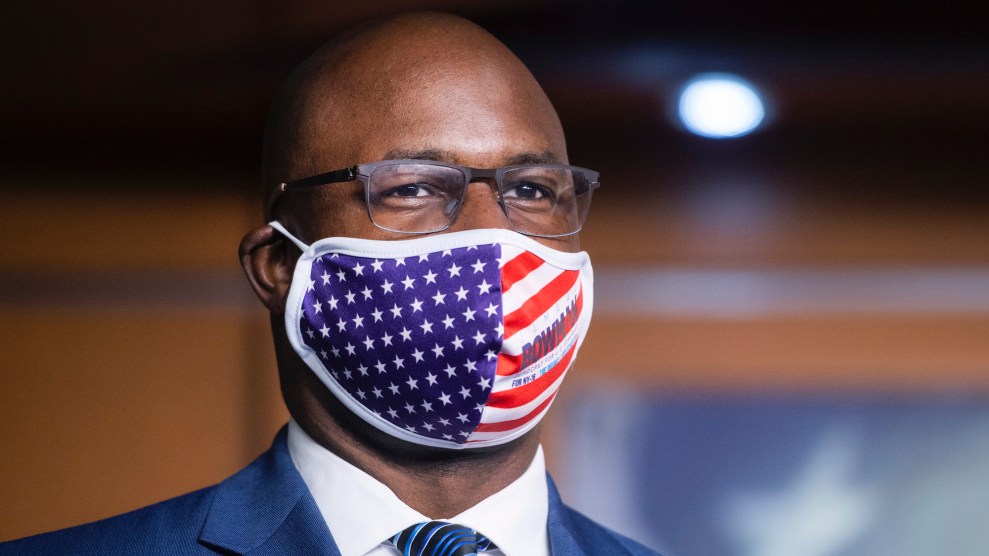 Rep. Jamaal Bowman (D-N.Y.) is drafting legislation to call for a commission to investigate Capitol Police and whether any of its members have ties, directly or indirectly, to white nationalists and white nationalist sympathizers.

“It’s critical when you look at the disparity in terms of how the Capitol Police responded to the insurrection on Wednesday, versus how they responded to—not just [Black Lives Matter] protestors this summer, but other people of color, and people who are disabled, historically,” Bowman tells me.

The Capitol Police have come under intense scrutiny after a violent pro-Trump mob stormed the Capitol to stop Congress from certifying the electoral votes for President-elect Joe Biden. Despite repeated assurances to lawmakers that the Capitol’s law enforcement was adequately prepared to control the crowd, the insurrectionists broke through barricades wielding firearms, lead pipes, and chemical irritants; infiltrated the House chamber; and ransacked House Speaker Nancy Pelosi’s (D-Calif.) office. The violence left five—including a member of Capitol Police—dead. Only 14 arrests by Capitol Police were made.

Progressive activists were quick to note discrepancies in the way Capitol Police had arrested and used force against protestors during previous largely peaceful demonstrations. On social media, side-by-side comparisons of the heavy military and police presence outside the Capitol during the summer’s racial justice uprisings and the relatively paltry presence onsite Wednesday sparked outrage. “No one can tell me that if it had been a group of Black Lives Matter protesting yesterday, they wouldn’t have been treated very, very differently than the mob of thugs that stormed the Capitol,” Biden said in a video on Thursday. Both Pelosi and Senate Minority Leader Chuck Schumer (D-N.Y.) called for the resignation of the chief of Capitol police, who announced he would leave his post late Thursday night.

“My focus has always been racial justice, and this is right in alignment with that,” Bowman says of the bill he plans to introduce. “It’s just going to accelerate certain things and, I hope, make my colleagues more amenable to understanding what the hell we’re talking about when we say institutional racism is the number one problem in our country, outside of COVID, right now.”

The Squad and its newest members, like Bowman, have been among those leading the efforts to hold Trump and his allies accountable for their role in inciting and abetting the violent mob. Within hours of the insurrectionists’ siege, Rep. Ilhan Omar (D-Minn.) announced she would draw up articles of impeachment. Rep. Cori Bush (D-Mo.), another freshly sworn-in Squad member, has authored a resolution to expel any of her Republican colleagues who objected to certifying the electoral college results on Wednesday from Congress.

Some moderate Democrats blamed their November election losses in the House on the “defund the police” rhetoric that the party’s left flank supported during the protests that followed George Floyd’s killing. The backlash left some progressive Democrats to wonder if House Democrats would reconsider the police reform bill it passed at the height of the uprising over the summer. Bowman hopes the events on Wednesday have helped them reconsider the importance of those reforms.

“I’m on the record saying ‘Police have never kept me safe,’” Bowman, who is Black, tells me, “and I think Wednesday captured that for the majority of my colleagues.” He gives credit to the law enforcement officers who kept him and his colleagues safe. “The overall lack of presence and lack of preparation and sharing competence was on display for the world to see.”

“This may have been the first time in the lives of many of my colleagues that they felt that sort of terror and fear,” he says. “Hopefully, they’ll think about public safety a bit differently than they currently do.”