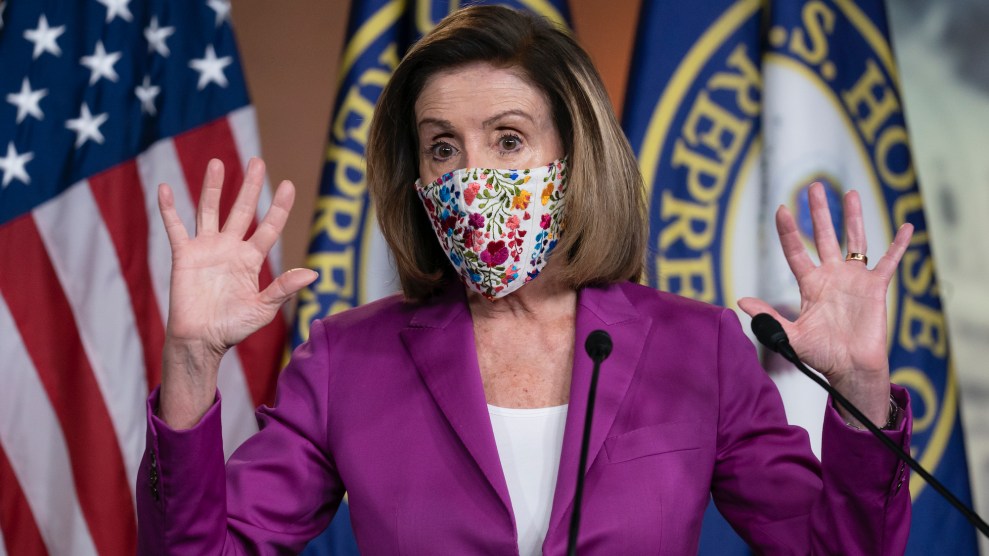 Speaker of the House Nancy Pelosi (D-Calif.) holds a news conference at the U.S. Capitol on January 7, 2021.J. Scott Applewhite

House Speaker Nancy Pelosi (D-Calif.) is demanding that Vice President Mike Pence immediately use his power under the 25th Amendment to remove President Donald Trump from office—a move that would require the consent of the majority of Trump’s Cabinet. Speaking Thursday at a press conference, Pelosi added that if Pence and the Cabinet are unwilling to do so, “the Congress may be prepared to move forward with impeachment.”

Trump “clearly has indicated that over and over again” he is unfit to serve, Pelosi said. “And inciting sedition as he did yesterday—he must be removed from office.” The House previously impeached Trump for abusing his power in 2019, but Senate Republicans voted to allow him to remain in office.

Pelosi did not mince words as she condemned Trump’s incitement of a violent mob that on Wednesday afternoon stormed the Capitol, temporarily shutting down the counting of the Electoral College vote. She called the insurrectionists “Trump thugs” who overran the Capitol “with no care” about the consequences. “People saw, throughout the world, something that looked like it was out of a banana republic,” she said, adding that the president “turned on the people.”

“We have to be very, very careful,” she later said. “These people and their leader, Donald Trump, do not care about the security of their people.”

Pelosi’s declaration comes just hours after Sen. Chuck Schumer (D-N.Y.)—the Senate’s top Democrat, who will soon be the chamber’s majority leader—made a similar announcement. But the impeachment process begins in the House, lending Pelosi’s decision enormous weight in potentially setting the process in motion. Rep. Ilhan Omar (D-Minn.) and a dozen of her Democratic colleagues announced a resolution to impeach the president for “high crimes and misdemeanors,” according to a press release. Both chambers of Congress are currently on a planned recess and would have to be recalled in order to carry out the proceedings, something Pelosi said she did not have “immediate plans” to do as she awaits a decision about the 25th Amendment from the executive branch.

When asked about how long she’ll wait for Pence and the Cabinet to act before moving forward, she said that she doesn’t “think it’ll take long to get an answer from the vice president” and that she was hopeful she would hear something today. She told reporters that she and Schumer “have made their interest in this known” to Pence. “If [Trump] wants to be unique and be doubly impeached,” Pelosi added, “that’s up to him and his Cabinet.”

Less than two weeks remain in Trump’s presidency, which presents a logistical challenge for carrying out impeachment proceedings—and for some, a logical one, given how little time remains on the clock. Pelosi rejected those arguments in her remarks on Thursday. “While it’s just 13 days left, any day can be a horror show for America,” she said. If Trump were removed from office in a Senate impeachment trial, he could also be barred from serving in the future, an idea he and his allies have flirted with since he lost the presidency.