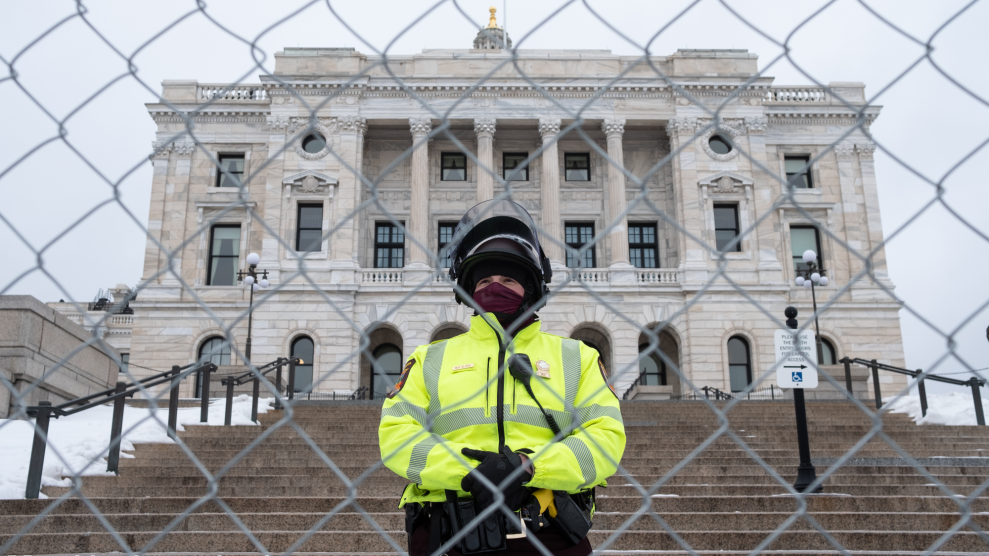 A Minnesota State Trooper stands guard on the steps of the Capitol building in Saint Paul on January 16, 2021. Tim Evans/NurPhoto/Getty

Pro-Trump supporters storming the US Capitol on January 6 was something of a wake-up call. While reporting now shows that there were in fact warnings of possible violence that day, there were multiple points of failure in preparing for it. Now federal law enforcement is trying to course correct, fortifying DC and bringing more troops to the capital city than are currently serving in Iraq and Afghanistan combined.

State capitals are similarly upping their security. Even before January 6, federal law enforcement had warned of violent threats tied to the inauguration of President-elect Joe Biden. A December report by the FBI warned that extremist groups, including the Boogaloo movement, were planning armed protests on Sunday January 17 at the US Capitol and various state capitals. And last week, an FBI bulletin obtained by ABC News warned of possible threats at all 50 state capitals.

So, as we head into the final days before Biden’s inauguration on Wednesday, here are some of the most notable examples of states ramping up their security:

On January 14, the FBI field office in Sacramento set up a command post to support “intelligence sharing and coordination with our law enforcement partners.” The personnel assigned to that unit include bomb technicians and a tactical support team, according to a statement by Special Agent in Charge Sean Ragan.

Up to 1,000 National Guard members are expected at the California State Capitol, which is surrounded now by “two metal fences,” the Sacramento Bee reported. A 3,000-person rally in support of Trump had been planned there on Sunday, but the California Highway Patrol denied organizers a permit, citing the event’s size and “the potential for civil unrest this weekend.”

Last week, the FBI arrested a Tallahassee man for allegedly planning to carry out violence at the Florida State Capitol on Sunday. The Tallahassee Democrat reported that the man, a former US Army soldier, had been seen in a YouTube video printing fliers that read, “Here in Florida we must circle the terrorists who attack the Capitol! Let them take the capitol and fight with the cops. SURROUND THEM AND TRAP THEM INSIDE.”

On the same day of that arrest, Florida Gov. Ron DeSantis activated the National Guard ahead of possible protests in Tallahassee. The Guard will stay activated until January 24.

The mayor of Frankfort issued a warning to residents to stay away from the Capitol area as state officials prepared for the possibility of violent protest. The Kentucky State Capitol grounds will not even be open on Sunday due to an order by Gov. Andy Beshear.

“There have been domestic terror threats against state capitals all over the United States,” Beshear said, adding that there have been no permit requests for demonstrations that day. “Our commitment is that what happened at the US Capitol will not happen here.”

Days after six men were indicted for planning to kidnap Michigan Gov. Gretchen Whitmer, the FBI identified Michigan as one of the states where “credible threats” existed for events planned on January 17 at the state Capitol.

On Saturday, Michigan Attorney General Dana Nessel told NPR there was “nothing serious” in the way of threats that she has “been alerted to,” but out of caution, the state legislature has already canceled its sessions for next week.

Another state associated with “credible threats” by the FBI, Minnesota has been on high alert in the days preceding Biden’s inauguration. Gov. Tim Walz and other state authorities warned residents to stay away from the Capitol, which was lined with state troopers and “barricaded with military-style Humvees,” the Star Tribune reported.

There was a pro-Trump demonstration outside the state Capitol on Saturday, which “lasted about two hours” but “drew far fewer than the 150 participants allowed by the state permit,” the Star Tribune reported. No arrests were made. The same conservative activist who organized Saturday’s event also has a “Sunday Church Service” planned for this Sunday, which is expected to draw around 20 people.

This weekend in Olympia, 600 members of the National Guard will guard the Capitol building through Biden’s inauguration.

“We don’t have any specific threats to any time date, location or anything specific to our area,” one state trooper told KOMO News in Seattle. “So our biggest point right now is to be prepared in case something does come.”

The militarized scene outside of the state Capitol with extra fencing and security check points “looks like a war zone,” the news station reported.