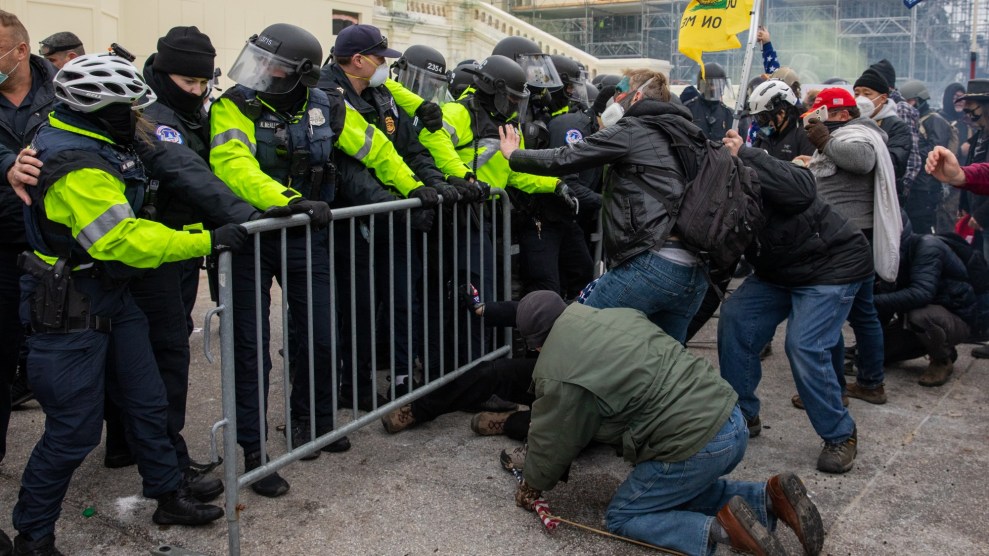 Last week’s violent insurrection at the US Capitol Building confirmed what researchers, lawmakers, and even Defense Department officials have been warning about for years: The United States military has not properly dealt with the far-right extremists in its ranks.

Some pro-Donald Trump rioters were either active-duty service members or veterans, including Ashli Babbitt, an Air Force veteran with at least seven deployments, who was killed by police while trying to break into the Speaker’s Lobby in the building.

“What Trump has done is he’s radicalized portions of the population. And the military reflects that.”

In the days since her death, Babbitt has been celebrated by the far right and has become a symbol of the military’s growing extremism problem. Allegedly joining her at the Capitol was, among others, retired Lt. Col. Larry Rendall Brock, Jr., an Air Force Academy graduate who was photographed holding zip-tie handcuffs after having broken into the Senate chamber. After he was identified and interviewed by the New Yorker, Brock was arrested.

Former congressional candidate Rick Saccone, a retired Air Force intelligence officer, also took part in the protest, though he remained outside the Capitol Building and was not arrested. Army Capt. Emily Rainey, who helped bus protesters to DC as part of her work with a North Carolina pro-Trump group, is an active-duty service member, though the Army confirmed this week that she submitted her resignation in October and plans to be discharged later this year. She later told the Associated Press that she had followed the law and that she did not know of any members of her group entering the Capitol. The Army is “currently investigating” the nature of her involvement, spokesperson Maj. Dan Lessard said in a statement.

Brian Sicknick, a Capitol Police officer who formerly served in the New Jersey Air National Guard, was killed during the riots, raising what Jeff Schogol of Task and Purpose called the specter of veterans “at war against themselves.”

The military has long grappled with high-profile instances of far-right extremism in its ranks—Oklahoma City bombers Timothy McVeigh and Terry Nichols were both Army veterans—but Defense Department policy has been slow to properly track and eradicate it, according to a report compiled by a DoD diversity and inclusion board following the police killing of George Floyd. Existing department guidelines permit membership in white nationalist organizations—just not “active” participation. Even if the military cracked down on participation in these groups, data on service member involvement in extremist organizations does “not exist in a standardized format,” the report stated, adding, “Further research is needed to adequately address the ways in which extremist ideologies and organizations infiltrate the military and DoD civilian communities.”

Thirty-six percent of troops who responded to a Military Times survey last year said they had “seen evidence of white supremacist and racist ideologies in the military,” a 14-point rise from the previous year. But that poll, conducted in collaboration with Syracuse University’s Institute for Veterans and Military Families, is subject to self-selection bias just like any survey that depends on voluntary responses.

One problem lawmakers have repeatedly singled out is the military’s lack of a strict prohibition against joining a white nationalist group. The military bars “active” participation in criminal gangs and other groups that support illegal discrimination or advocate for violence, but does not prevent members from joining these groups or voicing support for their ideas. At a February oversight hearing, Air Force Office of Special Investigations official Robert Grabosky told lawmakers that “mere membership in a white supremacist group is not prohibited.” (Air Force spokesperson Ann Stefanek confirmed that this guidance remains on the books across the military.)

These haphazard regulations are in dire need of an upgrade, says Mark Pitcavage, a senior research fellow at the Anti-Defamation League. “The military regulations dealing with extremism now originated in the late ’60s to deal with left-wing extremism. That’s how old they are,” Pitcavage says. But simply expanding the military’s policy on the types of groups its members cannot join isn’t enough. “Most extremists don’t belong to organized groups these days,” Pitcavage explains. While there are certainly extremists groups like the Boogaloo Bois and the Proud Boys who have made headlines this year for their acts of violence, the fact is that most people who hold extremist or white supremacist views aren’t members of a specific group. “You don’t necessarily need to join a formal group to be involved, to be active, to be radicalized,” Pitcavage says. “That’s just not as necessary as it used to be back in the day.”

When recruiting service members, the military does not check social media accounts for signs of extremism, Pentagon Director for Accessions Policy Stephanie Miller told Congress at the February hearing. “That’s an element that we are working in collaboration with our intelligence community on how best to incorporate that requirement,” she said. (The Defense Department did not respond to a request for comment on whether its policy on social media checks has changed.)

But the Pentagon at least knows that it has a serious issue on its hand. According to reporting by Politico, acting Defense Secretary Christopher Miller sent a memo last month ordering a review of “current policy, laws, and regulations concerning active participation by service members in extremist or hate group activity” and requested two reports on efforts to address extremism in military branches.

House Democrats also attempted to force DoD to study the possibility of screening for white nationalist beliefs among recruits, but the Republican-controlled Senate scrubbed the requirement from a version of the annual defense policy bill that cleared the House. The resulting legislation only asked the military to look at “extremist and gang-related activity.”

That’s not the only instance of Congress refusing to force the Pentagon to reform. Last year, lawmakers considered adding a provision to the defense policy bill that would have updated the military’s code of justice to address extremist activity. The requirement was ultimately removed despite the DoD task force on diversity and inclusion listing it among the recommendations in its public report. Rep. Jackie Speier (D-Calif.), who chaired that February oversight hearing, did get two other provisions included in the bill, including the creation of a DoD deputy inspector general for diversity and inclusion and a mandate that the Pentagon track white-supremacist and other extremist activity by service members.

Meanwhile, there’s a growing concern about military members who are engaging in violent extremist activity. The Boogaloo Bois have been actively recruiting military members. One of the suspects in the fatal shootings of two Bay Area police officers in June was an Air Force sergeant who prosecutors said was a member of the Boogaloo movement; he has pleaded not guilty. In September, the Air Force discharged a Colorado airman who allegedly had ties to the white nationalist group Identity Evropa. A US soldier stationed in Europe was arrested by the FBI in June and charged with terrorism offenses for allegedly plotting an attack on members of his own unit with the help of the Order of the Nine Angles, a Satanic neo-Nazi group; he has pleaded not guilty. Last January, a Coast Guard officer with white supremacist views was sentenced to 13 years in prison for stockpiling weapons and compiling a hit list of prominent figures in the government and media.

“This should have created a mandate by now for the military to systematically investigate white supremacist infiltration,” says Lecia Brooks, chief of staff for the Southern Poverty Law Center. “And it hasn’t been done.” Brooks and other extremist researchers have been warning about the threat of extremist infiltration in the military for years. In February, Brooks, along with Heidi Beirich, the co-founder of the Global Project Against Hate and Extremism, testified at that House Armed Services subcommittee hearing on white supremacism in the military. “Recruitment of active duty military and veterans has been a staple tool of white supremacist groups for decades and many former soldiers have risen to lead violent white supremacist groups in the United States after separating from the service,” Beirich said in a testimony at the time. Since then, she says, the white supremacist movement is growing, thanks in part to Trump. “I think what Trump has done is he’s radicalized portions of the population,” she says. “And the military reflects that.”

But the radicalization that Trump has inspired isn’t just reflected in the rise of extremist groups. Babbit, the Air Force veteran killed storming the Capitol last week, wasn’t a member of any specific extremist group, but was instead an avid follower of Trump-inspired conspiracy theories like QAnon, which is centered around the idea that the president is secretly waging a war against a cabal of Satan-worshipping, Democratic pedophiles. On Twitter, she posted about “the storm,” a concept in QAnon circles denoting when Trump’s enemies will supposedly be eliminated.

Since the events of last week, there have been new conspiracy theories that allege the whole riot was fake, or the work of Antifa posing as Trump supporters. That myth is already working its way into military circles and is something Beirich is concerned about. “This isn’t blatant white supremacy, this is believing the president and thinking that an insurrection is legitimate because the president encouraged it,” she says. “And as bad as it is to have white supremacists in the military, it’s real scary if you think that many troops might not believe in the constitutional system, because of what Trump has done.”