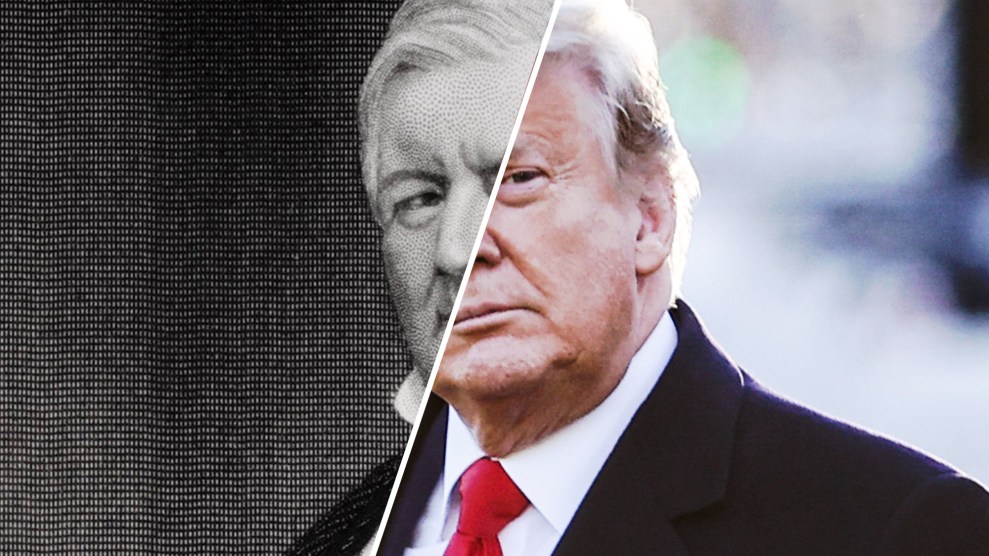 In the 1850s, one of the two dominant political parties in the United States, the Whigs, split into factions and imploded. These days, political commentators speculate that the Republican Party may be stumbling toward a similar cataclysm. There are, of course, significant differences between then and now. But the most fundamental one is that the Whigs blew up over a clash of ideology and today’s GOP is divided by the question of how loyal it should be to an authoritarian seeking to overturn a democratic election. One hundred and seventy years ago, the explosive issue was whether or not to protect a venal system: slavery. Now it is whether or not to protect a delusional man: Donald Trump.

Heading into the 1850s, the Whigs included those looking to contain slavery and those seeking to expand it into new states. As a house divided, the party could not stand for long—even when it held the White House. Millard Fillmore, a Whig who succeeded Zachary Taylor as president following Taylor’s death in 1850, personally opposed slavery but didn’t want to strike at the system and possibly destroy the union. “God knows that I detest slavery,” he wrote in 1851, “but it is an existing evil, for which we are not responsible, and we must endure it and give it such protection as is guaranteed by the Constitution, till we get rid of it without destroying the last hope of a free world.”

His position was unacceptable to the anti-slavery Whigs of the North. At the party’s 1852 convention in Baltimore, they managed to block Fillmore’s nomination as the party’s presidential candidate. That was a big deal: rejecting your own president due to a matter of principle. After more than 50 ballots, the Whigs finally settled on Winfield Scott, a well-known former general backed by the anti-slavery Northern Whigs. But Southern Whigs had managed to pass a pro-slavery platform. So the party was left with a presidential candidate favored by its anti-slavery wing—who was viciously derided by Southern Whigs—and a platform that protected slavery. Not surprisingly, Scott was walloped by Democrat Franklin Pierce in the general election, losing 27 of 31 states.

In the years afterward, the Whigs collapsed, as Northern Whigs flocked to the new anti-slavery Republican Party. In 1860, Abraham Lincoln, a former Whig, was elected president as a Republican.

The fight within the Whigs was, in a way, a battle for the nation’s soul. It hinged on the original sin of the country: slavery. It was certainly worth destroying the party over this. Cut to 2021. The GOP is undergoing a civil war centered on a much less lofty matter: Trump’s effort to steal an election.

With Trump falsely claiming he won the 2020 election—spreading baseless conspiracy theories and phony allegations of fraud—he has turned his crusade to overturn the results into a loyalty test. Real Republicans, he insists, must stand with him. Consequently, a dozen Republican senators and a majority of House GOPers have declared they will object to accepting electoral votes from swing states when Congress convenes on Wednesday to tally these votes. Following Trump’s lead, they are turning a largely ceremonial event into a noxious assault on American democracy and reinforcing Trump’s effort to delegitimize the election and undermine the incoming Biden administration.

Not all Republicans are rolling with Trump on this. Several senators—Tom Cotton, Mitt Romney, John Thune, and Pat Toomey—have voiced opposition to this cynical attack on the election. Of course, that has triggered Trump’s fury. On Twitter, he pummeled Thune, the number-two Republican in the Senate, calling him a RINO—a Republican in name only—and encouraging a primary run against him. And the move to challenge the electoral votes in Congress—initiated by Sen. Josh Hawley of Missouri—has placed Senate Majority Leader Mitch McConnell and his fellow Republicans in a jam. This no-win maneuver will force all Republicans in both chambers to vote on the challenges—that is, to take a stand on Trump’s bogus claim.

Trump loves this. He wants to turn his defeat—the supposed plot waged against him by Democrats, the media, Big Tech, the Deep State, and other nefarious foes—into the Lost Cause of the Republican Party. It is the mother of all grievances, the presidency robbed from Trump, the GOP, and its voters. And you’re either with Trump on this or against him—and if you’re against him, as far as he’s concerned, you have no place in the Republican Party. In fact, it’s not hard to imagine that in the coming years, Trump will consider the party’s top—or only—priority to be proving he was cheated and avenging his loss.

Trump wants to turn his defeat—the supposed plot waged against him by Democrats, the media, Big Tech, and the Deep State—into the Lost Cause of the Republican Party.

Hawley and his democracy-subverting compatriots are compelling Republicans to declare whether they accept or reject Trump’s disinformation-driven war on the election. There will be a split among Republicans during the voting on Wednesday, and it’s unlikely Trump will let this question drop. He will have a list of Trump loyalists and Trump betrayers. To the extent he continues as the party’s grand leader, he will make this the defining issue of the GOP. Hawley and Sen. Ted Cruz of Texas are leading this charge because as possible 2024 (or 2028) presidential candidates, they want to have a full claim on Trump’s base. Yet by enthusiastically supporting Trump’s crusade against the 2020 election, they are also helping Trump maintain his hold over Republican voters, which could make Trump a shoo-in, should he pursue the party’s next presidential nomination.

At the end of the electoral vote challenge, there will be Republicans who stuck with Trump and those who betrayed him. It’s not clear how deep and how long-lasting this split will be. But due to this move, the party risks a serious division over the cheating ways of one man, whose corruption was revealed by the release of the tape of his mob-boss-like phone call to Georgia election officials. The Republicans are not debating big ideas: economic policy, national security, the role of government. The debate is whether to join Trump’s clownish but dangerous attempt at a political coup. There is nothing noble here. Do you accept Trump’s democracy-defying cult of personality or not? For Trump and his followers, this is now what makes a Republican.

In the 1850s, the Whigs fell apart because “Conscience Whigs,” as they were called, bolted from a political entity that could not say no to slavery. This week, the party that grew out of those ashes is torn by allegiance to an unprincipled conniver trying desperately to remain in the White House. What a difference. Then again, maybe not so much. At the heart of this current battle within the GOP is the question of whether the United States is a republic governed by rules and whether power is determined by democratic elections. Trump says screw the rules, power is whatever you can get away with, by any means. A significant number of elected Republicans, by challenging election results without any basis to do so, are trampling on the Constitution and endorsing that brazen authoritarianism. Though they are scurrying to serve a small-minded man, they are illuminating a large and threatening tide within the GOP. And that is certainly worth a fight.