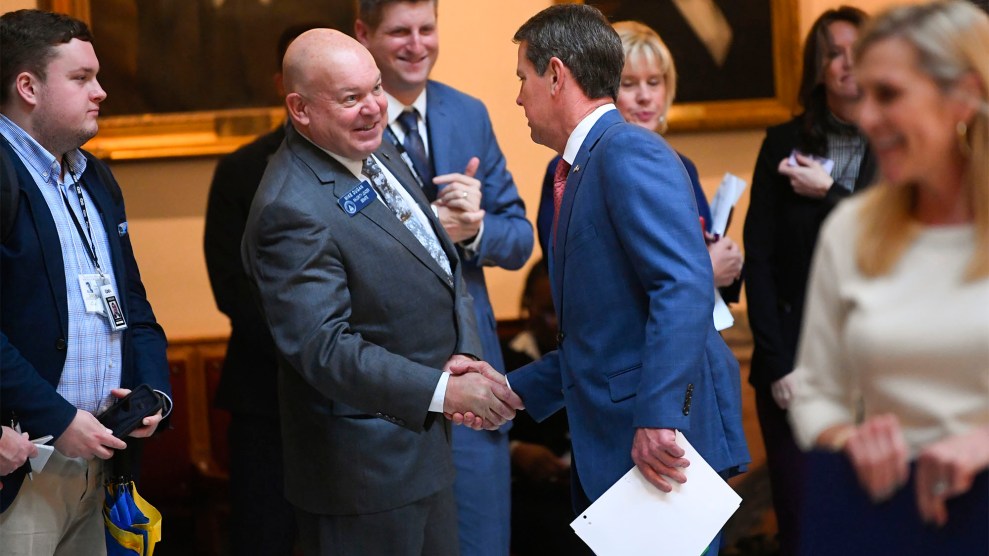 State Sen. Mike Dugan, R-Carrollton, second from left, shakes hands with Gov. Brian Kemp on the opening day of the year for the general session of the state legislature, Jan 13, 2020 in Atlanta.John Amis/AP

After record turnout in 2020, Republican-controlled states appear to be in a race to the bottom to see who can pass the most egregious new barriers to voting.

According to a new analysis by the Brennan Center for Justice, 253 bills to restrict voting access have been introduced in 43 states already this year. Georgia is ground zero for the GOP’s escalating war on voting, targeting the voting methods that were used most by Democratic voters in 2020 and which contributed to flipping the state blue and electing two Democratic senators.

On Tuesday, Georgia’s Republican Senate Majority Leader Mike Dugan introduced a bill repealing no-excuse absentee voting, which 1.3 million Georgians used in 2020, including 450,000 Republicans. Under his proposal, only a small subset of voters, such as those who are out of town, disabled, or over 65 (a demographic that leans strongly Republican), will be eligible to vote by mail. The small percentage of Georgians who can still cast ballots by mail will have to get a witness signature on their ballot and attach a copy of photo identification, which requires access to a copier or printer. The new law would make Georgia one of the most restrictive states in the country for mail voting.

Georgia Republicans wrote every aspect of the state’s already stringent voting laws and for many years promoted mail voting, specifically exempting mail ballots from voter ID requirements because they didn’t want their own voters, who are older and more rural, to be disenfranchised. They abruptly had a change of heart in November, when more Democrats than Republicans voted by mail for the first time.

The state Senate bill comes on the heels of legislation introduced by Georgia House Republicans last week that would eliminate voting on Sunday, a measure seemingly designed to suppress Black turnout by targeting the Souls to the Polls get-out-the-vote drives organized by Black churches. The bill has been dubbed “Jim Crow with a suit and tie.” Black voters make up roughly 30 percent of Georgia’s electorate but compromised 37 percent of Sunday voters in 2020. The bill also takes aim at mail voting by restricting the use of mail ballot drop boxes and gives election officials less time to send out mail ballots and voters less time to return them.

“If this bill is [passed],” April Albright of Black Voters Matter testified before the committee on Tuesday, “it will become part of the long history of voter suppression tactics that are used to disproportionately make it harder for Black and marginalized voters in Georgia to vote.”

Georgia House Republicans just introduced a bill to ban early voting on Sundays prior to election, when Black churches do Souls to the Polls get out the vote drives

The House bill also radically changes the rules of runoff elections after Democrats Jon Ossoff and Raphael Warnock won their January 5 runoff races. It shortens the runoff period from nine weeks to four weeks, cuts early voting to just five days, and prohibits new voters from registering for the runoffs after November, all of which will make it harder for Democratic candidates to mobilize voters. The changes in the House bill would have impacted 2.2 million voters in 2020, according to an analysis by the Georgia Democratic Party. The bill is expected to be approved by the House Special Committee on Election Integrity on Wednesday, and then will go to a full vote in the House.

Some high-profile Republicans in Georgia, including Secretary of State Brad Raffensperger, have repeatedly defended the integrity of their state’s voting system, holding three recounts in the presidential election that found no evidence of fraud. But that hasn’t stopped Republicans in the legislature from amplifying Donald Trump’s Big Lie to build support for new restrictions on voting. “Many of these bills are reactionary to a three month disinformation campaign that could have been prevented,” Raffensperger said on Tuesday.

“The reason some people have lost faith or are losing faith in our elections, it’s that Republicans have manufactured, fostered and encouraged [it] through silence and conspiracy theories and cult behavior.”

A case in point was the statement released Tuesday by the Georgia Senate GOP caucus: “Many of our citizens have expressed a lack of faith and integrity in our current election systems. We have heard these concerns voiced by many, and addressing these concerns has been at the forefront of our legislative efforts this year to promote the good of this state.” This has become the standard line for Republicans, who peddled a bogus stolen election narrative to their constituents, then used that as a pretext to make it more difficult to vote. The Senate bill is sponsored by all but three Republicans in the chamber, making it likely it will pass after it clears the Senate Ethics Committee and goes to the Senate floor.

On Tuesday morning, Georgia Democratic Senator David Lucas from Macon, who grew up in the Jim Crow-era and was one of the first Black lawmakers elected to the Georgia legislature since Reconstruction, gave an impassioned speech denouncing these efforts. “Every last one of these elections bills are about the election didn’t turn out the way you wanted and you want to perpetuate the lie that Trump told you,” Lucas said on the Senate floor, wiping away tears.

Thank you @SenDavidLucas for your speech today against SB67. It's shameful that @GeoffDuncanGA and @BillCowsert allow racist bills and belittle those who raise concerns. It shows the urgent need for HR 1 and HR 4, to protect voters from racist laws. #gapolhttps://t.co/GiegKffVc0

Indeed, one recent poll found that three-fourths of Republicans believe Joe Biden didn’t legitimately win the election and Republicans around the country are seizing on Trump’s lies to restrict voting even in states he won.

Iowa Republicans are on the verge of enacting a new bill that would cut nine days of early voting and severely restrict mail voting by limiting ballot drop boxes to one per county and preventing county officials from sending absentee ballot request forms to voters.

“Most of us in my caucus and the Republican caucus believe the election was stolen,” said Republican state senator Jim Carlin when the Iowa state senate approved the bill on a party-line vote on Tuesday.

“Give me a break,” responded Democratic state Senator Joe Bolkcom. “The reason some people have lost faith or are losing faith in our elections, it’s that Republicans have manufactured, fostered and encouraged [it] through silence and conspiracy theories and cult behavior.”

Though Trump won Iowa by eight points, GOP state Senator Jason Schultz said, without evidence, that “Iowans’ votes were disenfranchised by some shady dealings in five cities around the country.”

The same thing is happening in Florida, which Trump pointed to as a model for secure mail voting and where Trump himself voted absentee. But now Republican Gov. Ron DeSantis has called for restricting mail voting by blocking election officials from automatically mailing ballots to voters who’ve cast absentee ballots in the past and making it easier to throw those ballots out for minor errors.

The explosion of new GOP bills making it harder to vote is increasing pressure on Democrats in Washington to pass the John Lewis Voting Rights Act and the For the People Act to stop new voter suppression efforts. As one Georgia Republican told the Atlanta Journal-Constitution: “If Democrats were looking for a reason to pass a new federal voting rights law, this is example 1A.”

The passage of new voting rights legislation will likely require eliminating the filibuster, which Democratic Sens. Joe Manchin and Kyrsten Sinema have said they will not do. If Democrats fail to act, the consequences for democracy will be felt for many years to come.