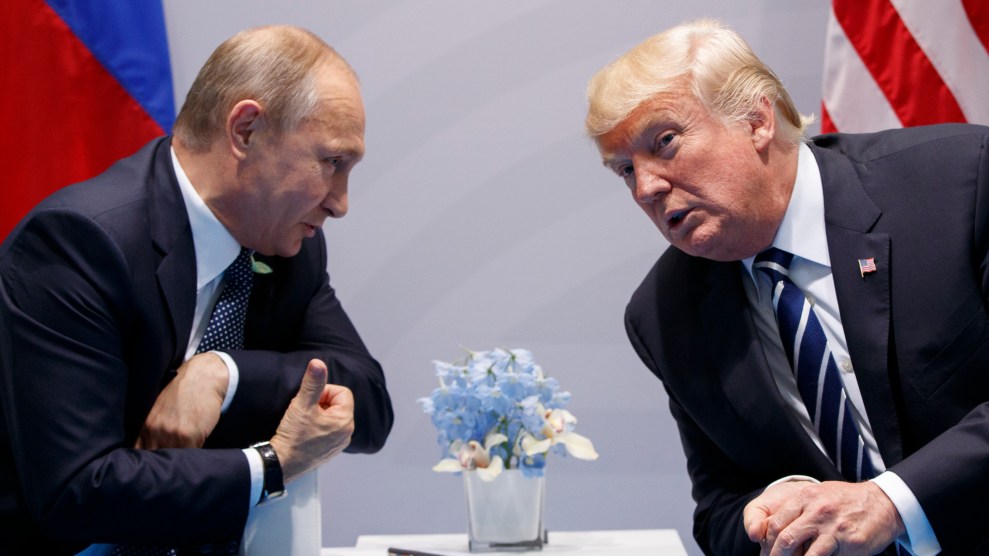 Vladimir Putin did it again. After directing Russian intelligence to attack the election to boost Donald Trump in 2016, the Russian leader launched another covert assault on American democracy to help Trump retain the White House in 2020. And he had help. Assorted Trump allies and conservative media outlets —including Rudy Giuliani, Fox News, and OAN—were useful idiots for Putin and his clandestine operators.

Those are the damning conclusions of a report released Tuesday by the Office of the Director of National Intelligence. Even though Putin failed in his second attempt to elect Trump, the unclassified document presents a disturbing account of a foreign autocrat exploiting all-too-willing media and political players in the United States to undermine the nation’s political system.

Giuliani and his media allies were key elements of a Russian disinformation scheme mounted to keep Trump in power.

Aside from the main story of Putin’s return engagement, the report offers a broader study of foreign influence in the 2020 election, noting that Iran tried to use social media to undercut Trump and that China generally stayed out of the picture. But its key finding is that “Putin authorized and a range of Russian government organizations conducted influence operations aimed at denigrating President Biden’s candidacy and the Democratic Party, supporting former President Trump, undermining public confidence in the electoral process, and exacerbating sociopolitical divisions in the US.” According to the ODNI, Moscow did this by using “proxies linked to Russian intelligence to push influence narratives—including misleading or unsubstantiated allegations against President Biden—to US media organizations, US officials, and prominent US individuals, including some close to former President Trump and his administration,”

The report doesn’t name these dupes. But it’s clear who they are. Foremost among them is Giuliani, who as Trump’s personal lawyer sought dirt on Biden from sketchy sources in Ukraine and elsewhere. And a slew of rightwing media outlets, including Fox, OAN, Newsmax, and others, amplified and disseminated the anti-Biden swill Giuliani collected. The ODNI notes that Moscow’s “primary effort” in 2020 “revolved around a narrative—that Russian actors began spreading as early as 2014—that alleged corrupt ties between President Biden, his family and other US officials and Ukraine. Russian intelligence services relied on Ukraine-linked proxies and these proxies’ networks—including their US contacts—to spread this narrative to give Moscow plausible deniability of their involvement.” (One side aim of this clandestine project was to reduce Trump’s support of the Ukrainian government.)

The report shows how Trump and his conservative allies fell for Moscow’s covert action, embracing the Kremlin’s anti-Biden and anti-Ukraine disinformation and casting it throughout the US political-media environment. The paper states:

A network of Ukraine-linked individuals—including Russian influence agent Konstantin Kilimnik—who were also connected to the Russian Federal Security Service (FSB) took steps throughout the election cycle to damage US ties to Ukraine, denigrate President Biden and his candidacy, and benefit former President Trump’s prospects for reelection. We assess this network also sought to discredit the Obama administration by emphasizing accusations of corruption by US officials, and to falsely blame Ukraine for interfering in the 2016 presidential election.

These are the lines that Trump and his GOP defenders have been pushing for years, especially during Trump’s first impeachment: Ukraine, not Russia, intervened in the 2016 election, and that the real scandal was not Trump’s attempt to push Kiev to gin up a baseless investigation targeting Biden but the Biden activity in Ukraine. According to this report, Trump, GOP Reps. Jim Jordan and Devin Nunes, Fox host Sean Hannity, and many others on the Trumpian right were parroting Putin’s propaganda.

One fact the report leaves out is that Kilimnik was a former business associate of Paul Manafort, who was a top Trump campaign official for much of 2016. During that time, Manafort secretly met with Kilimnik and shared polling data with him. The ODNI sidesteps this point, but the big picture includes Trump’s campaign chief having clandestinely hobnobbed—colluding?—with a Russian agent who is now connected to Moscow’s covert plot to undermine Biden. Kilimnik’s appearance as a Moscow manipulator in two consecutive elections ought to be front-page news.

The ODNI goes on to report that Kilimnik, Andriy Derkach, a Ukrainian legislator tied to Russian intelligence, and their associates “sought to use prominent US persons and media conduits to launder their narratives to US officials and audiences. These proxies met with and provided materials to Trump administration-linked US persons to advocate for formal investigations; hired a US firm to petition US officials; and attempted to make contact with several senior US officials.”

This appears at least in part to be a reference to Giuliani’s endeavors—which included the efforts of pro-Trump lawyers Joe diGenova and Victoria Toensing and conservative journalist John Solomon—to collect and promote unproven allegations about Biden related to his son Hunter’s business activity in Ukraine.

In essence, the ODNI says Trump’s personal lawyer and his comrades and their allies in the media were key elements of a Russian disinformation scheme mounted to help Trump hold on to power.

This was not the only recent Russian attempt to mess with US politics, the ODNI says. After the 2018 midterms—when the Democrats won back the House—Russian intelligence cyber operatives hacked organizations affiliated with the Democratic Party. And in 2019 and 2020, the report says Russian military intelligence hackers “unsuccessfully targeted US political actors.” They also tried to penetrate Burisma, the Ukrainian company that Hunter Biden worked with. The ODNI also reports that during the 2019 presidential primaries, Russian online influence actors “backed candidates from both major US political parties that Moscow viewed as outsiders.” It doesn’t state who that was.

According to the ODNI, the Kremlin’s trolls and bots were busily assisting Trump throughout the 2020 election season on social media. They “sought to amplify mistrust in the electoral process by denigrating mail-in ballots, highlighting alleged irregularities, and accusing the Democratic Party of voter fraud.” They “generally supported President Trump and his commentary” and boosted “disparaging content” about Biden, while  promoting “conspiratorial narratives about the COVID-19 pandemic.” They “sought to discourage US left-leaning audience from voting.”

The report doesn’t provide great detail, but it does reveal that the Kremlin’s key influence operation, the Lakhta Internet Research troll farm (once known as the Internet Research Agency), used “social media personas, news websites, and US personas to deliver tailored content to subsets of the US population.” And it established “short-lived troll farms that used unwitting third-country nationals in Ghana, Mexico, and Nigeria to propagate thee US-focused narratives, probably in response to effort by US companies and law enforcement to shut down LIR-associate personas.”

During 2020, the Trump administration received intelligence indicating the Russians were once again trying to interfere on Trump’s behalf. But Trump and his aides refused to share this information with the public and did not provide a full accounting to Congress. Now we know why: the thrust of a major Trump attack on Biden was a Russian invention. Trump, Giuliani, and the rest of the gang were in cahoots with the Kremlin in waging this war on Biden. They were enabling and aiding yet another Russian attack on a US election—just as they did in 2016.  This is another Trump scandal of tremendous significance that will probably not get its due.

At least this time, Putin did not win. He is one for two in his attempts to make Trump president. The ODNI report details what was ultimately a failure, but it also provides a warning that a possible collaboration in 2024 between Moscow and Trump—or another Trumpish candidate—remains a clear and present danger.