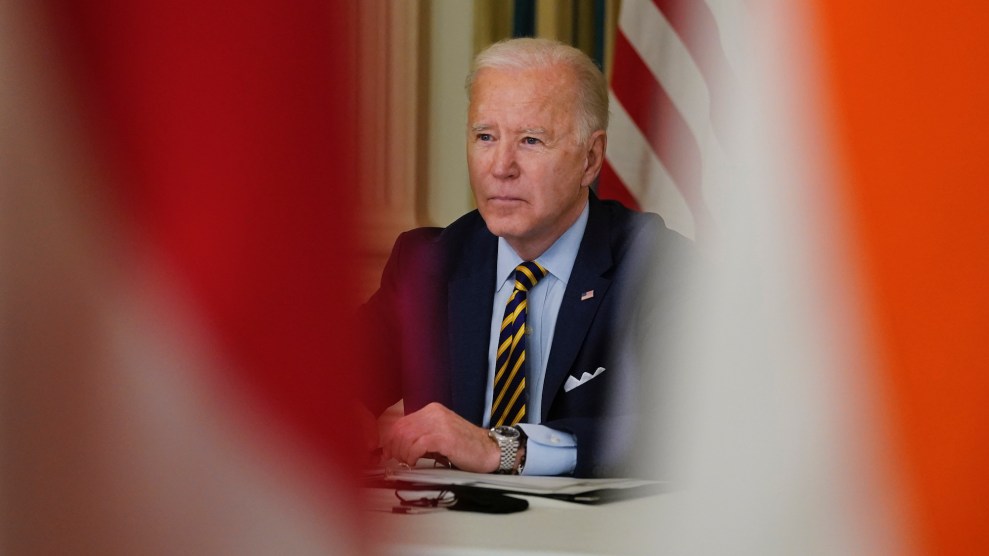 Joe Biden took a victory lap when he went on the TV airwaves for his first presidential address last Thursday. “America is coming back,” he announced, a comeback premised on the $1.9 trillion pandemic relief package he’d signed into law earlier that day. If history proves Biden right, he will have already offered future generations something fond to recall as they gaze upon his oil painting: It was under our 46th president that the United States defeated a pandemic and yanked the economy back from a precipice.

But Biden did not campaign on the stimulus as his lasting economic legacy. That was just the prerequisite for an ambitious job and infrastructure package, one he promised would not simply pull the economy out of a pandemic-induced collapse, but leave it better than the pandemic found it. It would be, in the estimation of Biden and his aides, a signature achievement worthy of the FDR-sized legacy to which he aspires. “This is our moment to imagine and to build a new American economy,” Biden declared on the campaign trail last July. That reimagination took the form of his campaign’s Build Back Better plan, a whopping $7.3 trillion in investments across the US economy. Biden proposed $700 billion in American manufacturing, $2 trillion in clean energy and infrastructure, more than $1 trillion in child and elder care, and billions more to address racial equity.

With the stimulus in the rearview mirror, the White House is now turning its attention to that agenda. House Speaker Nancy Pelosi directed her chamber to begin work on a “big, bold, and transformational infrastructure package” last Friday; Senate Majority Leader Chuck Schumer (D-N.Y.) is overseeing similar conversations. Biden’s campaign promises are now being pitted against the practicalities of governing, and the scope, cost, and timing of this package are all up for debate. So, too, is Biden’s own hope that the package would garner at least some Republican support.

There’s also a recognition that this next phase could be one of the only chances he has to pass major legislation during his first term in office, and certainly before the 2022 midterm elections—especially as long as the Senate Democrats refused to revoke the filibuster’s 60-vote threshold for passing most legislation. Biden himself has only suggested tweaks to the filibuster to make it more onerous on the minority, not actually getting rid of it. And so the jobs plan has already become the theater for Democrats’ battles over the shape Biden’s legacy should take—both in what he achieves, and how he achieves it.

The stimulus bill Biden signed last week is, by many measures, a watershed piece of legislation. The price tag alone repudiates the austerity politics that haunted President Obama’s recovery efforts, and safety net protections amount to a war on poverty unseen since Lyndon Johnson declared his own 60 years ago. But despite the size and scope, it is a bill conceived of, negotiated, and passed under the banner of crisis, and its construction reflects that. Most of the ambitious measures are temporary, either in the form of one-time payments or provisions that expire at the end of a year.

In the weeks leading up to the stimulus’s passage, the White House took meetings with union heads, business leaders, and lawmakers that telegraphed a desire to tackle infrastructure next. Biden said as much during an Oval Office meeting with Democratic House leaders and committee chairs last month, when the president said he could “hardly wait” to begin working with Rep. Peter DeFazio (D-Ore.), chair of the House’s infrastructure committee, on the subject. Pelosi’s announcement clarifies that it is, indeed, where the party will now channel its energy, specifically naming transportation, energy, broadband, education, housing, and water systems for “job-creating initiatives,” leaving room for “other critical priorities.”

An open season has begun for advocates fighting to ensure their pet issues are among those “other critical priorities.” At the end of February, for example, the National Domestic Workers Alliance and the Service Employees International Union asked fellow progressive organizations to sign a letter demanding Biden uphold the $450 billion investment in home and community-based care that his campaign promised. “A lot of people are going to be talking about infrastructure in the coming days, and that is important, absolutely,” Ai-jen Poo, the senior adviser to Care in Action and the executive director of the National Domestic Workers Alliance, tells me. “What we’re trying to say here is the infrastructure that is required for caregiving services to families is as essential as roads, bridges and broadband.”

Sara Nelson, the president of the Association of Flight Attendants, says informal conversations with aides have given her “every reason to believe” the child and elder care promises in Biden’s campaign platform will be a part of the president’s eventual proposal—as will creating a green economy and addressing trade deficiencies by implementing Biden’s American manufacturing proposal. AFL-CIO president Richard Trumka, who joined Biden and other labor leaders in the Oval Office last month, vows to “keep working with President Biden” to deliver the funds needed to address climate, racial, and economy injustice, and “to build everything from wind turbines to public transit—along with a new generation of good-paying union jobs.”

Others, meanwhile, want to see the anti-poverty provisions in the stimulus be made permanent. “The American Rescue Plan was a strong start, but if Congress stops now and allows the provisions of this bill to expire instead of building on them, we’ll be right back where we started,” says Claire Guzdar, the campaign manager for ProsperUS, a coalition of more than 70 progressive organizations seeking to hold Biden to his ambitious economic campaign promises. Sen. Bernie Sanders (I-Vt.) believes Congress’ next budget bill—which he’ll oversee as chair of the Senate budget committee—will have to be the vehicle not only for climate and infrastructure projects, but also other long-sought progressive reforms, such as lowering the cost of prescription drugs. It’s an attractive prospect since that bill, unlike most legislation, only needs a simple majority of senators to pass, instead of the usual 60 votes. “If you want to do something significant, it’s very hard to get Republican support,” Sanders told reporters on Tuesday.

Sanders’ push to use the reconciliation process for infrastructure runs counter to the bipartisan aspirations the White House and Democratic congressional leaders have for the package, a tension that ultimately could force the administration to choose between achieving its top priorities and reaching across the aisle. Sen. Joe Manchin (D-W.V.) has vowed to block an infrastructure package if it has no Republican support. But DeFazio, the House’s transportation chair, cast doubts on the prospect of that during a Congressional Progressive Caucus meeting earlier this month, telling fellow lawmakers behind closed doors they should be prepared for a partisan infrastructure push. He cited the White House’s meeting with a bipartisan group of lawmakers last month at which DeFazio learned any climate-related measures would be a nonstarter with his GOP colleagues. Republican lawmakers are also likely to put up a big fight against any of the tax increases the White House is eyeing to pay for the bill.

Exactly which agenda items will be included remains unclear—as does the ultimate legislative strategy. White House aides are in the early stages of developing a piecemeal legislative approach for key pieces of the proposal, according to sources who have been in touch with the administration on these plans. On the climate front, for example, the White House has signaled that environmental justice and a clean energy standard would be top priorities for an infrastructure package, but hasn’t clarified whether the push for those items would be bipartisan or through reconciliation. On his end, DeFazio is gearing up to reintroduce a sweeping $1.5 trillion infrastructure bill that passed the House last year and working with the White House and congressional leadership to determine whether its $500 billion surface transportation reauthorization—which expires in September—might be peeled off into its own separate bill.

There’s also an expectation that the major elements won’t be revealed until late summer, giving the White House time to build both a political argument and bipartisan support for its initiatives. But some progressives are already balking at the idea of dragging out a process they expect will end with a budget bill passed only with Democratic votes. In the meantime, the White House has been discussing another possible method to implement some of the Build Back Better priorities: A “skinny budget,” a wish list of spending requests administrations often release early in their first terms. The White House is eyeing a major boost in annual non-defense spending—somewhere between 15 and 20 percent, or $100 to $150 billion, according to sources familiar with the preliminary discussions. While the amounts may seem paltry next to the nearly $2 trillion Congress just spent, these amounts would fund permanent line items, marking a long-term investment that could support elements of Biden’s campaign plans. (An OMB spokesperson did not respond to a request for comment.)

For now, Biden is set to be defined as a president who put the country back on the path it had been on before the pandemic struck. Whatever comes together for his jobs and infrastructure aspirations will, in all likelihood, be what determines whether he’s recalled for more than that.