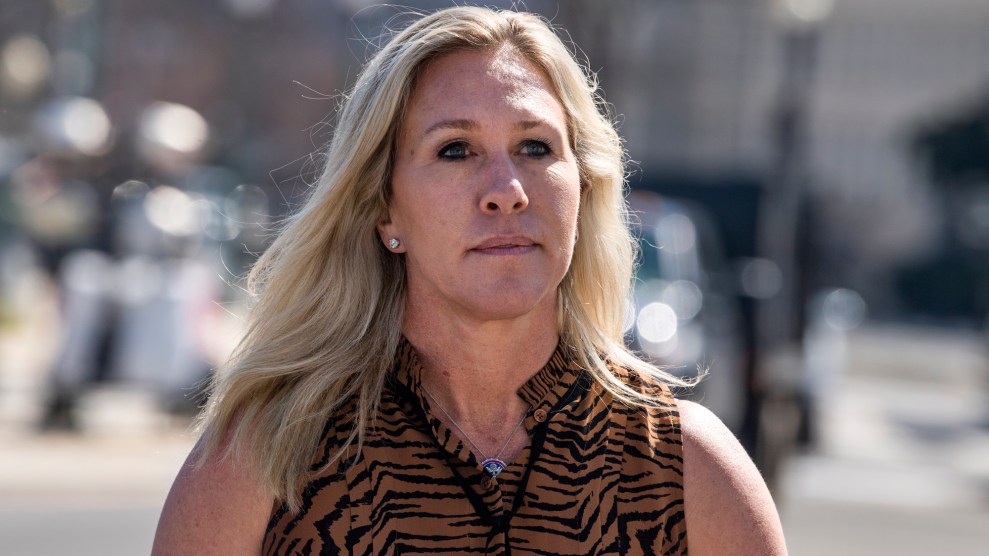 On Friday, Rep. Marjorie Taylor Greene (R-Georgia) had a bad day. Twitter suspended her account for 12 hours by mistake, just hours before Rep. Jimmy Gomez (D-CA) introduced a resolution, backed by 72 Democrats, to expel her from Congress for her support for the Jan. 6 Capitol insurrection. Gomez called Greene, who has suggested Nancy Pelosi could be executed for treason and endorsed violence as a way of defending freedom, a “direct threat” to elected officials. Greene has also espoused support for the QAnon conspiracy theory and suggested that the Parkland mass school shooting was a false flag operation.

Apparently though, getting shut down by Twitter and attacked by her Democratic colleagues turned out to be fundraising rocket fuel: Once her account was back online, Greene announced that she had raised $210,000 in 24 hours for her reelection campaign.

Thank you to the 6,474 great American patriots from all 50 states who've contributed over $210,000 to my re-election campaign in the last 24 hours.

I'll never stop fighting for the People and #AmericaFirst policies.

Greene has noted before that Democrats are “stupid” for not realizing that their attacks are fueling her fundraising. “They don’t even realize they’re helping me. I’m pretty amazed at how dumb they are,” she told the Washington Examiner in February, after she raised $300,000 during a time when Democrats were planning to strip her of her committee assignments.

Up for reelection next year, Greene faces a tough campaign thanks to the controversy she generates. For instance, she famously suggested on Facebook that a 2018 California wildfire was caused by laser beams from space, possibly instigated by bankers like the Rothchilds looking to clear land for a high-speed rail line. Critics accused her of anti-Semitism.

Apparently looking to counter such notions as she tries to distance herself from those earlier comments, Greene on Monday visited an Orthodox Jewish areas of Brooklyn and Long Island, in New York. In an interview with a local Jewish news outlet, she claimed that the “Jewish space laser” story was ginned up by the media and that she couldn’t possibly be anti-Semetic because she had no idea that the Rothchilds were Jewish before she suggested that space lasers started the Camp Fire in California. “It really hurts to be called ‘antisemite’ or racist,’ she told Ami Magazine. “No one has ever called me that before in my life until the left-wing media decided to attack me.”

Such controversy has driven a dozen Democrats to line up to run in her district already, and local party leaders believe she will draw significant primary challenges. “The next Republican primary is going to be a bloodbath,” David Boyle, the Democratic Party chair of Walker County, told Business Insider last month. “The middle-of-the-road traditional Republicans are tired of all of this craziness. They’re going to put out strong candidates.”