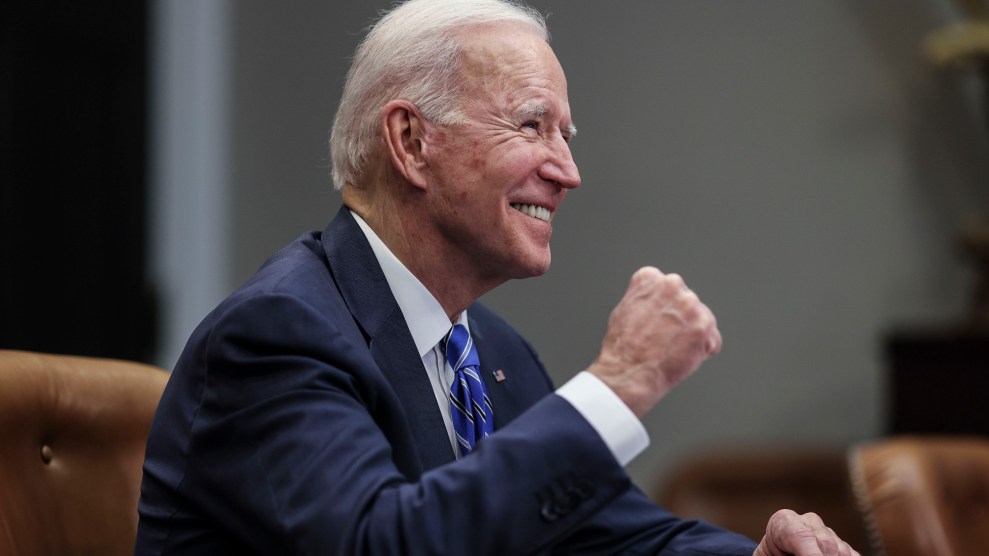 Since kicking off his run for president, Joe Biden has promised to create a more equitable American economy, coining a slogan for the legislative overhauls that it will take to make this happen: “build back better.”

The $1.9 trillion coronavirus relief package that is expected to pass the House today before heading to President Biden’s desk will not, alone, achieve that goal. But the package is historic in its ambitious approach to alleviating poverty, allocating billions—if temporarily—in stimulus checks to households, expanding unemployment relief, and directing cash payments to families with children.

The package is intended to be a lifeline helping families through the twin crises they’ve now faced for a full year—a deadly pandemic, and a recession that has pummeled low-wage workers the hardest. But it also sets out the policy contours of what is possible over the next four years if Biden and Democrats choose and succeed in making some of this package’s temporary changes permanent.

“Think of this relief package as a demonstration of what we could do,” says Claudia Sahm, a former Federal Reserve economist and a senior fellow at the Jain Family Institute.

The bill’s best known provisions include a third round of stimulus checks—the largest ones yet, at $1400 per person in eligible households—and an extension of a $300 per week boost to unemployment benefits into September. But beyond that, there are a number of provisions that could lay groundwork for the administration’s work towards economic equity post-pandemic. Here are just a few:

Expansion of the Child Tax Credit: Until now, most families with children have been able to claim a $2000 per child reduction of their taxable income. This child tax credit had a number of eligibility caveats, including the fact that it wasn’t fully “refundable”—tax-speak meaning that some low-income families weren’t able to claim the full benefit. But the Democrats’ stimulus package changes this rule, while also significantly increasing the credit amount and changing how the credit is delivered to families.

Now the credit will be fully refundable, worth $3000 per child, and $3600 for each child under the age of 6. What’s more, the bill makes it so that part of the credit will be paid out in advance to families, in the form of a monthly $250 or $300 per child check from the government, beginning in July.

Eligibility for the expanded credit will phase out when individuals with kids begin to earn more than $75,000 and couples more than $150,000, and the program is only set to run through the end of 2021. Were it to be made permanent, analysts have found that it could reduce child poverty by roughly 40 percent.

This expansion of the child tax credit—and the move to paying out part of it as an allowance to families—represents a quick shift in policy thinking. “In February of 2019, it was a fairly niche idea to have cash transfers per child,” says Sahm. “This was not the consensus among progressives or left of center economists. It’s really amazing how fast a policy can get momentum built behind it.”

Even this summer, it wasn’t clear whether Biden’s team was willing to commit to the creation of this kind of benefit. But as the pandemic has dragged on, there has been a shift toward policies that favor getting cash into Americans hands: The Heroes Act, passed by House Democrats last summer, included a temporary child allowance. And last month, Sen. Mitt Romney (R-Utah) proposed his own version that would provide an even more generous child allowance, but by decreasing other safety net programs.

Removes taxation on student loan forgiveness: The COVID relief package includes a provision that would make student loan forgiveness tax-free through January 2026. This provision eliminates a key concern for those pushing to cancel student debt cancellation: Currently, most cancelled loans would still be subject to taxation, potentially costing borrowers thousands of dollars. Sens. Elizabeth Warren (D-Mass.) and Bob Menendez (D-N.J.) hailed the passage of this provision as an important milestone that paved the way for Biden to cancel student debt and “lift this impossible burden off of tens of millions of families.”

A number of economists have noted that student debt cancellation could help close the racial wealth gap, as minority borrowers face disproportionately higher levels of student debt. Its impact, though, will depend in part on how much debt Biden and Democrats decide to cancel: Last month, Biden made clear he would not be willing to cancel more than $10,000 via executive action—a far lower figure than the $50,000 in cancellation pushed by Sen. Elizabeth Warren and other progressives.

Lower health insurance costs: Under the Affordable Care Act, the government has subsidized the cost of private health plans purchased by low- and middle-income families through government exchanges. But the subsidies tap out when you make more than four times the federal poverty rate—about $51,000 for individuals and $106,000 for a family of four.

Democrats’ COVID relief package will expand subsidies to fully cover the premiums for families and individuals earning up to 150% of the federal poverty level, and will limit all other buyers using the exchanges to out of pocket costs that are no more than 8.5% of their income. These subsidy expansions are slated to expire at the end of 2022. The Congressional Budget Office concluded in February that the expansion will make health insurance coverage more affordable for millions.

Medicaid expansion incentives: Though the Affordable Care Act covers 90 percent of the costs associated with expanding Medicaid, there are still 12 states that have refused to take that step, leaving about 2.2 million low-income Americans without health coverage. The stimulus bill offers a temporary bump in federal funding over the next two years for those holdout states, that would not only cover the costs of expansion, but, according to the Kaiser Family Foundation, give those states additional billions to spare.

A number of Republican governors in those states appear to be unswayed by the incentive for now. But this piece of the stimulus package lays legislative groundwork for investing in further Medicaid expansion—a policy that has been shown to reduce income inequality, and to narrow racial disparities in access to health care.