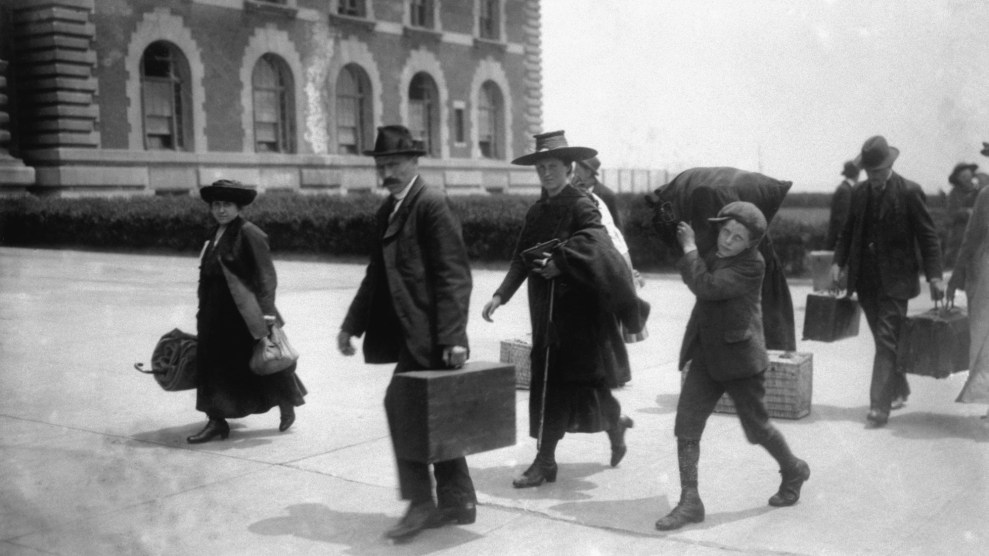 Immigrants arrive at Ellis Island in New York around 1900. Corbis/Getty

In June 2018, White House adviser Stephen Miller emailed Francis Cissna, who oversaw the country’s legal immigration system at US Citizenship and Immigration Services. The Trump administration’s family separation policy was on its way to becoming the biggest scandal in the country, but Miller was focused on a different part of his immigration agenda—one he wanted to speed up and prioritize. “Francis,” he wrote, “the timeline on public charge is unacceptable.” The public charge rule was Miller’s plan to deny green cards to poor and working-class immigrants. It was the centerpiece of his plans to slash legal immigration. One former Trump official called it Miller’s “singular obsession.” Now it’s dead.

In February, President Joe Biden signed an executive order directing the Department of Homeland Security, which oversees USCIS, to review the implementation of the public charge rule. As part of that review, DHS decided to stop defending the rule in court. “The 2019 public charge rule was not in keeping with our nation’s values,” DHS Secretary Alejandro Mayorkas said in a statement on Tuesday. “It penalized those who access health benefits and other government services available to them.”

The public charge rule never generated anywhere near as much outrage as the Muslim ban or family separation. That was understandable. It was a 217-page piece of federal rulemaking whose true purpose was obscured by bureaucratic jargon. But it was Miller’s best chance for preventing people from the kinds of countries that his boss liked to refer to as shitholes from eventually voting in US elections. By some estimates, the rule would have blocked hundreds of thousands of people from getting green cards each year. No other Trump regulation had the potential to so fundamentally alter how many people became Americans or what the country’s new immigrants looked like.

Lacking time machines, USCIS staffers were supposed to make that decision by looking at things like a green card applicant’s credit score, ability to speak English, and whether they made more than 250 percent of the federal poverty line. In essence, it was a class test that repudiated the “huddled masses” spirit inscribed in the Statue of Liberty. (Miller, a close reader of white nationalist texts, liked to point out that Emma Lazarus’ poem was not part of the original construction.)

The Migration Policy Institute, a nonpartisan Washington think tank, found that the rule would disproportionately affect people from the Africa, Central America, the Caribbean, and Mexico. The people least likely to be affected came from Canada, Europe, and Oceania. MPI called it “something of a modern-day version of the National Origins Quota Act,” the 1924 law that favored immigrants from Western Europe.

Complementing the direct provisions of the rule were the “chilling” effects that caused immigrants to stop using public benefits they remained eligible for. MPI looked at Census Bureau data to determine that use of food stamps, welfare, and Medicaid dropped twice as quickly among noncitizens as citizens during the first three years of the Trump administration. Many immigrants sponsoring relatives for green cards stopped using benefits out of fear that it would cause their loved ones’ applications to be denied. Before the election, Shahad Sarmad, an Iraqi refugee, told me what the rule meant for her and her 18-month-old girl as she applied for a green card for her husband:

I heard about the public charge rule when I was still applying for my green card. I heard that if you’re using food stamps, you can’t bring your mother or your father to live with you. I stopped applying for food stamps immediately. I was desperate for cash to pay rent, but I didn’t apply for cash benefits. I will never do it. I will go work for 12 hours a day at a retail shop while eight months pregnant rather than receiving cash benefits.

The Trump administration was able to create the rule in the first place because ever since 1882, US law has blocked people whom immigration officials deem public charges. That law had its origins in state-level efforts to keep out people from Ireland. The provision went on to be used against people from other places WASPs considered to be the excrement of the day. As the New York Times lamented in 1887 when a judge ordered the release of detained Irish immigrants who’d been deemed public charges, more open borders would mean that “we must receive and support the human dregs of the Old World.”

Less bigoted minds eventually prevailed. In 1999, the Clinton administration decided that people wouldn’t be considered public charges unless they were mostly dependent on cash benefits from the government, a standard few met. For now, DHS is going back to using the Clinton-era standard. It will presumably move to formally rescind the rule as part of the ongoing review process.

Miller hasn’t weighed in on the defeat from his new Twitter account. Instead, he’s defending the Royal Family and retweeting the Hill for aggregating his tweets about the royals.