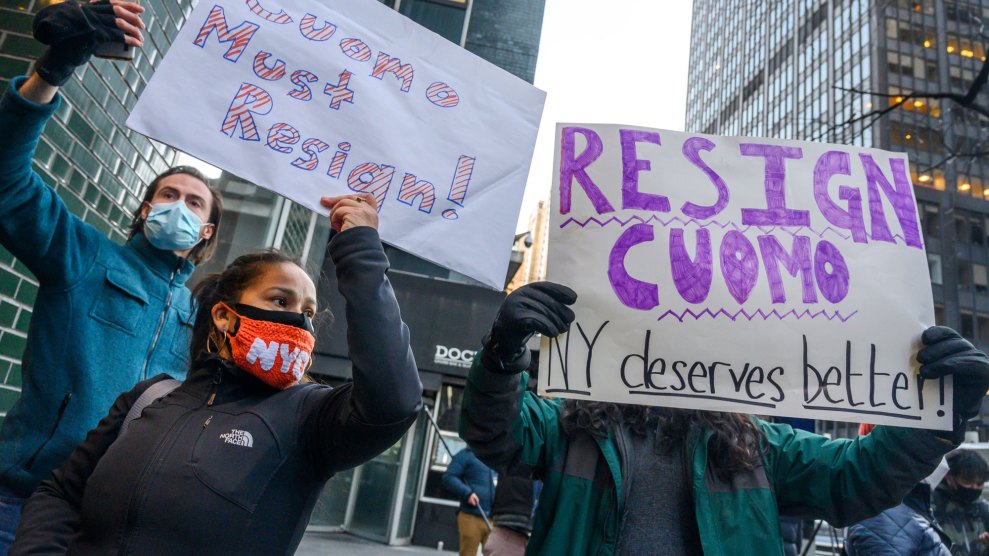 Two more former employees came forward over the weekend with accusations of impropriety against New York Gov. Andrew Cuomo, magnifying calls for his resignation or impeachment and adding to the mounting pressure on the governor who wrote a book about his response to the pandemic even as his administration has come under federal investigation for its handling of data on pandemic nursing home deaths.

Ana Liss, who worked for Cuomo as a policy and operations aide from 2013 to 2015, told the Wall Street Journal that Cuomo called her a sweetheart, touched her lower back while taking a picture together at a reception, and at one point kissed her hand as she got up from her desk. At the time, she viewed his actions as flirty but has come to see them as “not appropriate, really, in any setting.”

Cuomo’s embrace was “very long, too long, too tight, too intimate,” one former employee said.

Karen Hinton, a former press aide to Cuomo when he led the US Housing and Urban Development, described an instance in a hotel room in which Cuomo embraced her in a “very long, too long, too tight, too intimate” way. “He pulls me back for another intimate embrace,” Hinton told the Washington Post. “I thought at that moment it could lead to a kiss, it could lead to other things, so I just pull away again, and I leave.”

These new accounts follow earlier accusations of improper sexual behavior by Cuomo aides, and a claim by New York State Assemblyman Ron Kim that Cuomo had called him and threatened to destroy his career and reputation if he refused to walk back criticism of Cuomo’s handling of nursing home death data.

Lindsey Boylan, a former deputy secretary for economic development and special adviser to Cuomo, accused the governor of giving her an unsolicited kiss and making improper comments. Charlotte Bennett, a former health policy adviser to Cuomo, claimed he had asked probing questions about her sex life, including whether she “had ever been with an older man.” The allegations prompted an investigation by state attorney general Leticia James. Another woman, Anna Ruch, accused Cuomo of touching her bare, lower back and asking if he could kiss at a wedding in 2019.

Last week, Cuomo publicly apologized for his behavior but said he would not resign from office. “I now understand that I acted in a way that made people feel uncomfortable,” he said. “It was unintentional and I truly and deeply apologize for it. I feel awful about it and frankly, I’m embarrassed by it, and that’s not easy to say. But that’s the truth.” Aides who have worked with Cuomo and spoke to the Wall Street Journal and Washington Post described a toxic, high-pressure workplace under his leadership. As the Post reported:

What Cuomo has touted as an “aggressive” style goes far beyond that behind the scenes, according to more than 20 people who have worked with him from the 1990s to the present. Many former aides and advisers described to The Post a toxic culture in which the governor unleashes searing verbal attacks on subordinates. Some said he seemed to delight in humiliating his employees, particularly in group meetings, and would mock male aides for not being tough enough.

And from the Journal:

Ms. Liss and other current and former administration officials said the governor regularly asked them about their dating lives, touched them and commented about their physical appearance. Longtime staffers told some women they should wear high heels when the governor was in Albany, according to Ms. Liss and other former staffers. Mr. Azzopardi said no one was compelled to wear high heels.

In the wake of the most recent reports, Boylan called publicly for Cuomo’s resignation, as have some of the governor’s colleagues. In a call with Senate Majority Leader Andrea Stewart-Cousins on Sunday, Cuomo refused again to resign, adding they would have to impeach him to remove him from office.