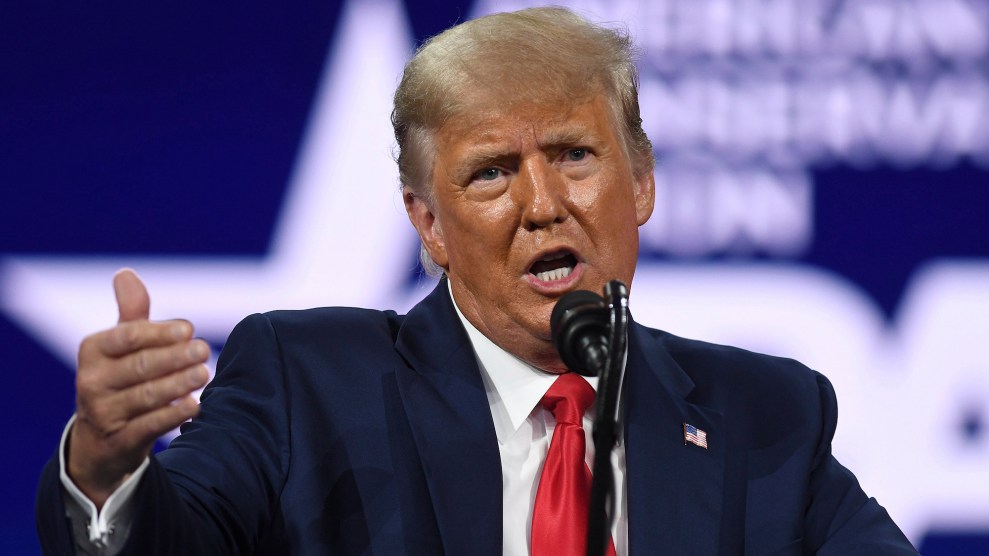 The secret to Donald Trump’s successful small dollar fundraising is out: tricking donors into giving much more money than they understood they were giving. But his GOP allies—apparently unbothered by the ethical implications of such tactics—are still employing the same strategies. If you don’t fall for this trick, a new fundraising appeal from the National Republican Congressional Committee suggests, you’re a traitor to Trump.

Throughout his time in politics, Trump has leaned heavily on deceptive fundraising tactics to goose his campaign’s war chest, with fake promises of matched donations or special honors for donors. But recently the New York Times revealed that these tactics went far beyond anything seen in modern politics—by the end of the campaign cycle, the Trump campaign had to refund more than $122 million in donations, about 10 percent of his total, and $100 million more than President Joe Biden’s campaign. Not all of the refunds were in response to complaints about fundraising tactics, but the Times reported that the Trump campaign had frequently used confusing tricks like pre-checking a box that would turn contributions into a reoccurring monthly donations, or that would double the amount given—or both. Encouraging donors to double their donation or make it recurring is standard fare for political fundraisers of all stripes, but making those options the default is not. One disgruntled donor told the Times that a $990 donation he made was mysteriously turned into an $8,000 donation thanks to these tactics.

Trump, predictably, refused to admit there was anything untoward about the way his campaign raised money. In a statement, he didn’t dispute the figures presented by the Times but said that all of his money was raised legally.

Currently, visitors to the former president’s website who are interested in donating see a solicitation to make the donation recurring, but the box is unchecked. Not so in the most recent round of fundraising efforts from Trump’s GOP allies in Congress. In a series of appeals that went live Wednesday morning, donors to the NRCC—which backs GOP House candidates—were first asked if they would like to sign up for a (currently non-existent) social media service run by Trump, and then quickly hit up for donations. And not only were the boxes asking for recurring donations pre-checked, the text associated with them made it very hard for any loyal Trump supporter to uncheck them.

“Check this box if you want Trump to run again. Uncheck this box if you do NOT stand with Trump,” one fundraising appeal, first reported by The Bulwark, stated in bold text. Underneath, in non-bold text, it added, “Make this a monthly recurring donation.”

In another version of the same fundraising appeal that appears on the website of WinRed, a for-profit company with close ties to Trump that is used by many in the GOP to help solicit grassroots donations, the bolded language is more explicit. “We need to know we haven’t lost you to the Radical Left. If you UNCHECK this box, we will have to tell Trump you’re a DEFECTOR & sided with the Dems,” it says in bold. Below that, in less prominent text, it adds, “Make this a monthly recurring donation.”

The move would probably amuse Trump, who has long followed the mantra that you should never admit wrongdoing and then double-down on the bad behavior. (That said, Trump recently threatened to sue the NRCC and other GOP allies if they used his name and likeness for fundraising without his permission.)

Neither the NRCC nor WinRed responded to requests for comment.