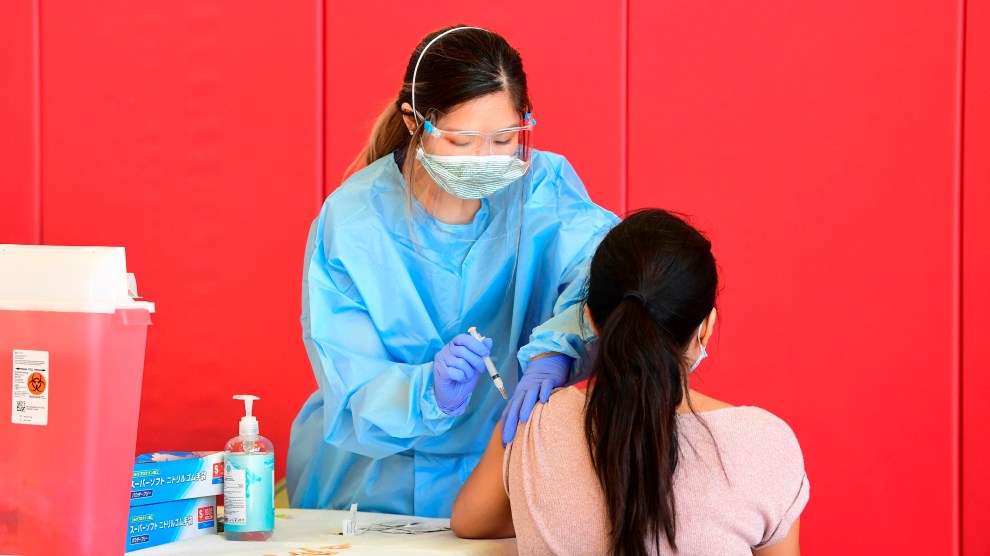 A few weeks ago, Dr. Jen Gunter began hearing from people on Twitter who had experienced something strange after receiving a COVID-19 vaccine: Their periods were unusual. Some reported menstruating early, right after receiving the shot. Others experienced unusually heavy bleeding. At first, Gunter, a gynecologist and righteous slayer of health misinformation (and the subject of a profile by my colleague Maddie Oatman) suspected the symptoms were the result of pandemic strain rather than the shot itself—stress is a known cause of menstrual cycle irregularity. But as the reports kept coming in, Gunter began to wonder if something else could be going on. “It happened enough that I thought I should look into it,” she said.

A few media outlets have written about vaccines and menstruation—back in February, it was in the news in Israel, where the vaccine rollout is further along. In the United States, there has been a flurry of coverage over the last few weeks, first in smaller outlets like The Lily and a few days ago in the New York Times. A few weeks ago, Dr. Kathryn Clancy, a professor of anthropology at the University of Illinois, tweeted about her own post-vaccine menstrual irregularity. She heard from so many people with similar experiences that she and a colleague decided to run a survey to collect data on post-vaccination cycle changes. It has received more than 19,000 responses since it launched in early April.

Gunter decided to do some digging. She contacted the companies that developed the vaccine to see if they had any data from trials on menstrual irregularity—but no one got back to her. In a post on her Substack, she laid out several possible scenarios that could explain cycle changes after the shot. I won’t go into the details here—Gunter’s post is excellent, and presents the science in easy-to-understand language. But one basic point she makes is that the endometrium—the lining of the uterus—is part of the immune system. Among other functions, it protects newly implanted embryos from pathogens. “It’s not inconceivable that there could be a connection,” she told me, between the shots and cycle changes.

Until there’s a formal study, Gunter emphasizes, no one will be able to anything more than speculate. That could take a while: While the trials tracked other mild side effects—like fever—they didn’t include data on menstrual changes. “People assume a period that is heavy or late is not bothersome, but you could only assume that if you believe periods aren’t important,” says Gunter. “You know antivaxxers are going to run with this.”

And actually, that’s precisely what has happened. Over the last few days, social media accounts from those opposed to vaccines have begun to promote the outlandish idea that simply being around people who have been vaccinated causes menstrual issues and even miscarriage. The first, as far as I can tell, was Kim Alberts, a self-described “health and medical freedom” enthusiast who runs an Instagram account with more than 64,000 followers. Albert’s previous posts read like a greatest hits list of health misinformation and conspiracy theories: She warns of the dangers of chemtrails and extols the virtues of coffee enemas. In recent posts, Albert has shared anecdotes supposedly submitted by thousands of her followers who have “caught” cycle changes from vaccinated people. For example:

Last week, erstwhile feminist icon Naomi Wolf, who has a doctorate in English literature not medicine, amplified these wild claims in a tweet to her 128,000 followers:

Wolf, the author of 1990 classic The Beauty Myth, has recently taken to promoting conspiracy theories, including those about the coronavirus. Her transformation from towering giant of feminism into base purveyor of misinformation has been the subject of some media attention.  (She denies trafficking in conspiracy theories.)

This particular flavor of vaccine misinformation doesn’t surprise Gunter. She points out the persistent (and roundly debunked) myth of “menstrual synching”—a phenomenon wherein menstruating people who share close quarters supposedly have their periods at the same time. But expanding this myth to include the even more preposterous notion that a vaccinated person can somehow create menstrual difficulties for an unvaccinated one is incredibly vexing to people who try to counteract misinformation. Stanford physician and misinformation researcher Seema Yasmin explained to me a few months back when we were discussing misinformation generally that this is because people remember the myth only because it’s interesting, but they don’t remember whether it’s true or false.

“It gets back to this whole inability to talk about menstruation.”

But the real source of these myths is much deeper, says Gunter. “It gets back to this whole inability to talk about menstruation.” The shame and embarrassment surrounding cycles leads to secrecy, misunderstandings, and wild rumors. The vaccine side effects mystery is just the latest example.

Fighting the stigma around periods is a giant project, but here is one small thing that would help: Drug companies could routinely track menstrual side effects in trials so that doctors could warn patients if a medication could affect their cycles. Gunter points out that aside from contraceptives, most physicians who run drug trials don’t even consult with OB/gyns. Some trials deliberately exclude menstruating people because of the chance they might get pregnant. (As my colleague Nina Liss-Schultz wrote, it’s still considered unethical to enroll pregnant people in trials.)

Perhaps in the coming months there will be more robust research on the COVID-19 vaccines’ possible effect on cycles. That would be nice. Even so it will be an uphill battle to quell the rumors that have already spread. All it takes is one high-profile tweeter to scatter 128,000 seeds. We’ll be weeding forever.