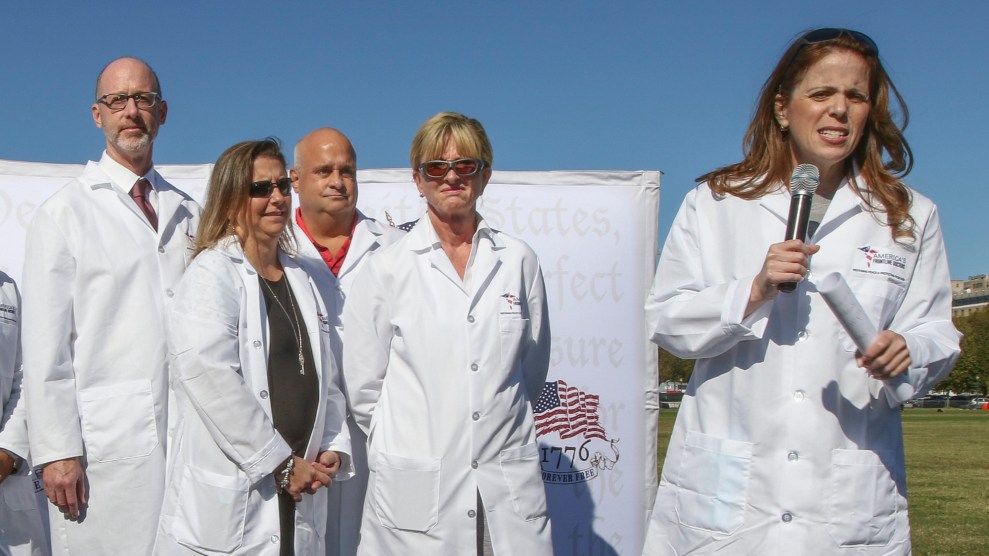 Simone Gold is a Stanford-educated lawyer, a board-certified emergency room physician, and also a criminal defendant awaiting trial on charges related to storming the US Capitol on January 6. Those charges don’t seem to be preventing her from hitting the road in an RV next week as she kicks off a cross-country “Uncensored Truth Tour.”

On the steps of the Supreme Court, Gold and about a dozen white-coated physicians talked about “medical cancel culture” and spent nearly 45 minutes making misleading claims about COVID.

“Doctors, nurses, business owners and patients across the country have been intimidated by politicians and public health bureaucrats for wanting alternatives to dangerous lockdowns, unproven Big Pharma vaccines, and restrictions on freedom that are not based on science,” Gold said in a press release. “We will not be canceled. This tour will help advance that critical conversation and empower people with information.”

The founder of America’s Frontline Doctors, Gold is best known for organizing a summit last summer to promote President Donald Trump’s favorite bogus COVID cure, the anti-malaria drug hydroxychloroquine, and to oppose other public health measures designed to combat the pandemic. On the steps of the Supreme Court, Gold and about a dozen white-coated physicians talked about “medical cancel culture” and spent nearly 45 minutes making misleading claims about COVID.

As I wrote recently:

Most of them had never treated a COVID patient; ophthalmologists were overrepresented in the group. And one was really out there: Stella Immanuel, a Houston doctor who believes that some gynecological problems are caused by having sex with demons. “You don’t need masks. There is a cure,” she said. ‘Nobody needs to get sick.”

President Trump and his son Don Jr. retweeted a video of the event and it went viral, receiving more than 16 million views in a matter of hours before Facebook, YouTube, and Twitter took it down for spreading misinformation. Twitter even blocked Don Jr. from using his account for most of the day.

The video and the Big Tech censorship turned Gold into a right-wing media celeb. Despite her arrest, she has continued to be an outspoken critic of lockdowns, mask mandates and the COVID vaccine, which she likes to call an “experimental biological agent” that she claims is being tested on Black and Brown people and can cause infertility, among other alleged and baseless horrors. She even tried recently to organize a boycott of a cruise ship company for requiring passengers to get vaccinated.

WOW: @RoyalCaribbean cruises is now requiring you to get an experimental vaccine to book a cruise with them.

I will be boycotting the company instead. Who else is with me? #BoycottRC pic.twitter.com/5xSNzyz0It

Her group, AFDS, is sponsoring the RV tour, which so far lists only one other confirmed speaker: Ali Shultz, the AFDS legal director. According to her LinkedIn profile, Shultz got her law degree from Arizona Summit School of Law, a for-profit diploma mill that closed in 2018 after the American Bar Association yanked its accreditation because only about 30 percent of its graduates could pass the bar on the first try.

Bus tours have become standard fare for far-right activists since the heyday of the tea party movement. After the November presidential election, Amy Kremer’s “March for Trump” bus tour helped draw people to DC for the January 6 rally she organized, where Trump encouraged the crowd to march to the Capitol. But Gold’s RV trip seems like an unusual amount of low-rent traveling for a doctor and lawyer awaiting trial on five federal criminal counts.

About two weeks after Gold joined the rioters in the Capitol Rotunda, picked up a bullhorn, and gave a speech about “freedom,” she was arrested and released on bail. Her release conditions require her to stay in Central California unless she gets permission from the court to travel elsewhere. A spokeswoman from the federal Pretrial Services office told me the office could not disclose whether or not Gold had permission to tour the country.

Bail-jumping concerns aside, there’s a reason Gold might need an RV to hit the lecture circuit. At the end of April, Gold appeared on the “Spirit Campfire” show with musician, NRA board member and Trump supporter Ted Nugent, who was recovering from a near-death experience from COVID, a disease he’d once dismissed as a “Leftist scam” to destroy Trump. Calling her an “angel of mercy,” Nugent asked Gold about her pending criminal case. Framing herself as a victim of government oppression, she alleged that not only had “20 FBI agents” knocked down her door and thrown her in jail without letting her call a lawyer, the government had put her on the “no-fly list,” like any other alleged domestic terrorist.

As a result, if she wants to go on tour, it will apparently have to be by bus, not plane.