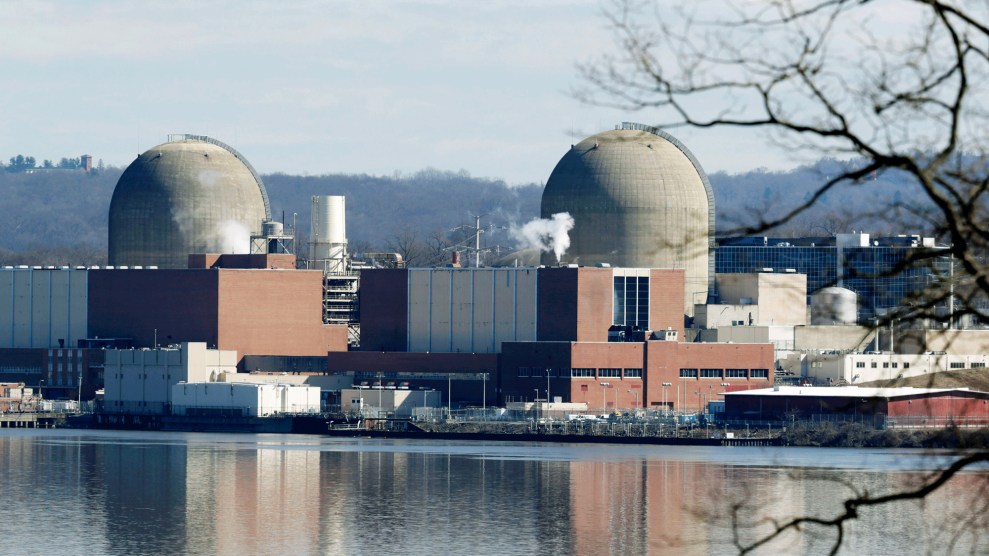 America’s energy past and future was on display on Friday at Indian Point, a nuclear plant 25 miles north of New York City that has been producing electricity since 1962.

At 11 am, the last of the aging plant’s reactor turbines shut down, ending a long political standoff. At the same time, wind and sun over the Hudson River alongside the plant pointed to the state’s energy future.

Environmentalists and politicians have described the plant as a threat to millions. Many welcomed the closure. “There are 20 million people living within 50 miles of Indian Point and there is no way to evacuate them in case of a radiological release,” Paul Gallay, president of the environmental group Riverkeeper, told the Associated Press.

In part, the plant was doomed by the attacks on the World Trade Center on September 11, 2001—the pilots of the hijacked planes used the river for navigation, alerting politicians to the vulnerability of the reactors on the banks of the Hudson. “The plant was built to withstand an airplane crash in the 70s,” New York’s governor, Andrew Cuomo, said recently. “Who knows what would happen now with Indian Point?”

Furthermore, nuclear power has lost favor as the cost of clean-energy renewables declines. In 2019, Indian Point provided 13 percent of New York state power. According to operator Entergy, for New York City and the lower Hudson Valley that figure was about 25 percent. Under a 2017 agreement between Cuomo, Riverkeeper and Entergy, another reactor was shut down a year ago.

On Friday in the town of Buchanan, the mood was dark. The plant has provided about 1,000 well-paid jobs and half the town’s tax revenue. A lengthy decommissioning process will cut jobs by two-thirds. “It’s a sad day, the end of an era, and it marks the loss of our largest employer and tax payer,” the mayor of Buchanan, Theresa Knickerbocker, told the Guardian. “I think people really didn’t understand nuclear and I’m hugely disappointed that a clean energy plant is being replaced by two gas plants. We talk about the environment and that’s not environmentally sound.”

As the Biden administration pushes for a non-fossil fuel-dependent energy policy, there will inevitably be a period in which more electricity is produced using gas-powered systems, before wind and solar take up the slack.

In the long battle over Indian Point, some have seen signs of political meddling. In 2017, the group Environmental Progress noted that two former Cuomo aides worked with a natural gas company, Competitive Power Ventures. The episode was detailed in a federal indictment filed by the then US attorney for the southern district in Manhattan.

“Based on my review of publicly available documents and my interviews of witnesses, including employees of [Competitive Power Ventures], the importance of the [CPV Valley Energy Center] to the state depended at least in part, on whether [Indian Point] was going to be shut down,” Preet Bharara wrote.

“We’re going in the wrong direction…The community is being poisoned by particulates.”

According to Nuclear New York, a group opposing closure, Indian Point produced 81 percent of downstate clean energy, with solar and hydro making up 2 percent and 4 percent. Fossil fuels accounted for 67 percent of all state production. “We’re going in the wrong direction,” said Pramila Malick, an activist with the group, adding that closing Indian Point and ramping up generation from fracked gas will increase state greenhouse gas emissions by 10 percent.

“The community is being poisoned by particulates,” Malick said.

Unions also oppose the closure. James Shillitto, president of UWUA Local 1-2, said it had “no upside, only downside.”

“The governor’s for renewable energy,” he said, “which we support. [It] is not going to happen with a magic wand. There isn’t a piece of equipment in the water for offshore wind and there isn’t any utility-scale solar built yet.”

More than 20 large-scale renewable energy projects will be under construction this year. Cuomo has promised 70 percent renewables by 2030 and 100 percent a decade later. “There are many hurdles to get that done,” Shillitto said. “Nimbyism is going to slow it down. So with the closure of this plant today we’re 1,000 megawatts in the hole. This closure is about fear, unrealistic fear, of a nuclear accident. The history here shows that after 58 years we haven’t had problems.”

Critics have pointed to a safety history that includes faulty reactor bolts and radioactive tritium in groundwater onsite. Groups like Riverkeeper say Indian Point kills fish by taking in river water for cooling. Greg Jaczko, head of the Nuclear Regulatory Commission under Barack Obama and a lecturer at Princeton, told the Guardian the carbon-free energy future will be “exclusively non-nuclear.”

“The nuclear industry failed to become a viable solution for carbon-free electricity generation,” he said, noting that of four Obama-era approved plants, two have been abandoned and two are behind schedule and over-budget. “Nuclear is an expensive way to generate carbon-free electricity when there are viable new alternatives. It’s cheaper today to build out renewable generation than it is to continue to operate 40-year-old nuclear power plants.”

But Jaczko did not dispute that fossil-fuel generation will increase in the short term. “There may be a period when the overall supply of electricity will see an increased dependence on natural gas,” he said, “but in the long term the trend is to reduce emissions significantly.”

Indian Point now faces a 12-year, $2.3 billion decommissioning run, subject to approval, by New Jersey-based Holtec International. In 2014, the company was cited by the Guardian for donations to Republican coffers after being granted significant subsidies by the state’s then governor, Chris Christie.

According to Jaczko, decommissioning could present problems given the age of the plant and the propensity for reactors in general to present surprises. “My biggest concern is that sufficient resources are set aside because it’s not a revenue-generating business,” he said. “If existing funds do not cover that cost, or it’s not done right, you could end up looking to taxpayers to foot the bill.”