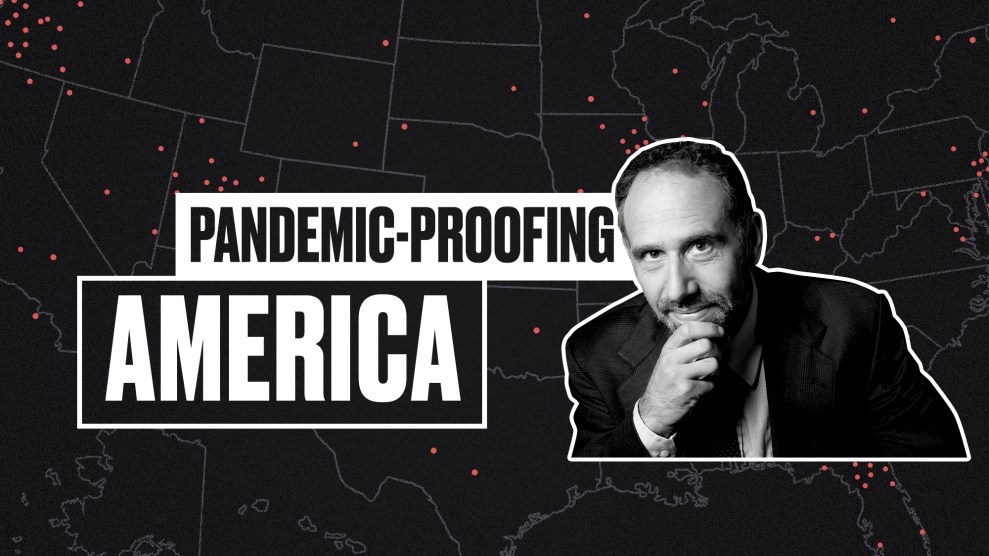 As the world grapples with the devastation of the coronavirus, one thing is clear: The United States simply wasn’t prepared. Despite repeated warnings from infectious disease experts over the years, we lacked essential beds, equipment, and medication; public health advice was confusing; and our leadership offered no clear direction while sidelining credible health professionals and institutions. Infectious disease experts agree that it’s only a matter of time before the next pandemic hits, and that one could be even more deadly. So how do we fix what COVID-19 has shown was broken? In this Mother Jones series, we’re asking experts from a wide range of disciplines one question: What are the most important steps we can take to make sure we’re better prepared next time around?

As the coronavirus continues to rage around the world, COVID-19 vaccine patents have become a life-or-death issue. On May 5, the Biden administration announced that it will support a World Trade Organization resolution to lift pharmaceutical companies’ patent protections on COVID-19 vaccines. It’s part of a broader shift away from Trump’s “America First” vaccine strategy, which prioritized inoculating Americans first by stockpiling doses in the US rather than exporting a surplus to other countries. If other powerful trading blocs follow suit, global sharing of vaccine production know-how could speed up the global vaccination effort and, ultimately, bring the pandemic to an end.

Dean Baker, the senior economist at the Center for Economic Research, says this is partly due to patents that prevent the widespread sharing of vaccine technology: Currently, pharmaceutical companies like Pfizer, Moderna, and Johnson & Johnson own the exclusive rights to their vaccines, from formulas to manufacturing techniques. Yet, “if we want to be able to be secure against this pandemic, we have to contain it everywhere in the world, not just the United States, not just in Europe,” Baker tells Jamilah King on this week’s Mother Jones Podcast.

This interview has been edited for length and clarity. Listen to the full discussion on the Mother Jones Podcast:

On how better patent policies could help end the pandemic: No one could be happy seeing what’s going on in India with the suffering there, the overwhelmed hospitals, people dying who could be saved. But the reality is even beyond that: If we allow the pandemic to spread unchecked, there have already been mutations, and the biggest risk from the standpoint of people in the United States, Europe, and rich countries, where people have been largely vaccinated, is that we’ll see a mutation that’s vaccine resistant. And if that happens, we’re back to ground zero, facing lockdowns, more infections, more deaths. So this isn’t just a matter of protecting people in South Asia and Sub Saharan Africa, which we should care about. But it’s also if we want to be able to be secure against this, this pandemic, we really have to contain it everywhere in the world, not just the United States, not just in Europe.

On President Biden’s recent decision to lift vaccine patents: This was really fantastic news. A lot of activists in the United States, Europe, and around the world had been pushing the Biden administration to do this. There’s a resolution before the World Trade Organization, proposed by India and South Africa. Now, somewhere around 100 countries signed on to it, mostly developing countries. The United States, Europe, and other wealthy countries have stood in opposition. The way the WTO works, everything has to be unanimous. So, Biden saying that the US is going to go along with the India South African resolution, it’s likely to get Europe and the other wealthy countries to go along, too—Japan and New Zealand are already on board. It’s possible that you will see holdouts in Europe, but my guess is with Biden having taken this step, he’ll likely use his authority to try to persuade the European countries to go along. They don’t want to be seen as standing in opposition to the to the whole world getting vaccines.

On how the government could persuade vaccine makers to share their knowledge: As many people have pointed out, there’s also industrial know-how that countries will need to get up to speed. The main talk has been about the “messenger RNA” vaccines. These are the Moderna and Pfizer vaccines. It’s a complex manufacturing process that even experienced vaccine manufacturers have not done yet. They will need expertise. What we really need is for the Biden administration to pressure these companies to transfer that expertise. Biden already did that with Johnson & Johnson—that’s not an mRNA vaccine. They got them to transfer their technology to Merck, which is now using some idle manufacturing capacity to produce the Johnson & Johnson vaccine.

“It’s a complex manufacturing process that even experienced vaccine manufacturers have not done yet. They will need expertise.”

Biden has authority under the Defense Production Act to try to pressure them. This is an area that could conceivably end up in court. But my guess is at the end of the day, the companies don’t want to be seen as being obstacles. They will get compensated, too, just to be clear.

I don’t know if anyone want to go this route, but the government could go around the companies. Let’s say Moderna says, “No, we’re not transferring our technology to anyone.” You could pay off their top engineers, give them a million dollars a month to put blueprints on the web and hold webinars on training with people in India, Brazil, and other countries. My guess is you’d get them to do it. You’d have to protect them from legal consequences, because Moderna would surely sue them. But that would be a way to do it. We hope nothing would ever come to that. But the idea that we’re somehow hostage to these drug companies, that’s really not true.

“The idea that we’re somehow hostage to these drug companies, that’s really not true.”

On how lifting patents would help India: It unfortunately can’t make an immediate difference, because we need vaccines, and we won’t get more vaccines overnight, regardless of whether we had the patents or not. But the point is, if we didn’t have the patents, it would facilitate the transfer of technology both within the US and Europe to other companies, and also to the developing world. Countries like India do have considerable capacity to produce vaccines. In fact, many of the vaccines are already produced there, in Brazil, South Africa, and other countries in developing world. If we can get vaccine production up and running in some of these countries in three, four or five months, that will still be an enormous help.

On why we should also lift patents for COVID tests and treatments: The resolution that India and South Africa put forward before the WTO would have removed protection for all of those for the duration of the pandemic. It would be great to see that, because treatments that might be thousands of dollars in the United States, that’s altogether unaffordable in most of the developing world. In very rare cases are these drugs ever actually expensive to produce and distribute. So a treatment that might be sold for thousands of dollars here, if you remove the patent protection, most likely you’re talking about one or two or three hundred dollars. And quite often even less than that. It’s almost invariably patents that make drugs expensive. They’re not expensive to produce.