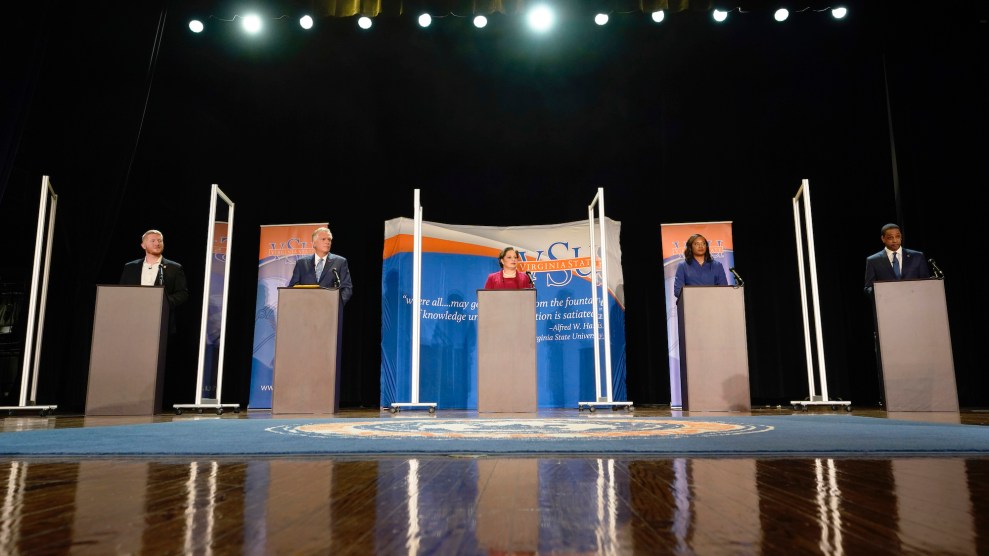 On most Tuesdays for the last five years, a gaggle of protesters have regularly gathered on a grassy hillside along a main drag in Sterling, Virginia, a far-flung suburb northwest of Washington, DC. In the early days of the Trump administration, as many as 40 people would congregate, brandishing signs that criticized former Rep. Barbara Comstock (R-Virginia) for her voting record that aligned almost perfectly with the positions of President Donald Trump. Some of their work, combined with efforts from an army of freshly enraged grassroots activists, led to the success of Democrat Jennifer Wexton, then a Virginia state senator, who defeated Comstock in the 2018 midterms. As Trump’s reelection bid loomed, the protests continued—particularly, in support of the Movement for Black Lives in the wake of George Floyd’s murder last summer.

In the months since President Joe Biden defeated Trump in Virginia, a much smaller group showed up to the usual spot, and the signs they carried have strayed from being missives of discontent. “The message was more like ‘Call this number to get vaccinated,’ different things like that,” Lana Reed, a leader of Sterling’s local Indivisible group, tells me.

After all, there’s not much for Virginia Democrats to gripe about. The party took control of the governor’s mansion in 2017 and flipped the General Assembly two years later, delivering Richmond entirely into Democrats’ control. Since then, state lawmakers have passed some of the most progressive reforms in the country, including abolishing the death penalty, enacting sweeping voting rights reforms, and raising the minimum wage to $12 an hour. Both the presidential and the off-year state elections had been a measure of the revulsion Trump’s victory inspired among broad swaths of the electorate. And Democrats’ success in Virginia during those off-year state elections, heralded as a bellwether by political watchers, foreshadowed the realignments of both major political parties during Trump’s tenure.

But now what? Trump, of course, is no longer the president, which is both a cause for relief but also concern among Democrats who relied on anti-Trump fervor to propel the party’s recent successes. But the nation’s first statewide Democratic party of the President Joe Biden era shows that the Trump hangover didn’t disappear after the new president’s inauguration. There have never been this many Democrats running for state office in Virginia in recent history, but polling, political experts, and trends suggest voters are eager to stick with the status quo.

A crowded field has emerged in the fight for the governor’s mansion—including two candidates, former state delegate Jennifer Carroll Foy and state Sen. Jennifer McClellan, vying to be the first Black woman governor in US history. Ditto the lieutenant governors’ race with its six Democratic hopefuls, one of whom may succeed to be Virginia’s first Muslim, or Hispanic, or Jewish, or openly gay official to be elected statewide. Fourteen of the 55 Democrats in the House of Delegates have a primary challenge; during the last primary elections in 2019 only four faced a primary opponent.

“Democrats wouldn’t be in the majority in the Virginia House if Trump had lost in 2016.”

There’s a straightforward explanation for Democrats’ increased interest in running for state office. “With a majority in Richmond, a lot of Democrats are inclined to think the office is worth having,” says Stephen Farnsworth, a professor of political science at the University of Mary Washington and an expert in Virginia politics. With a unified Democratic majority for the first time in a quarter decade, the party’s priorities are moving through the General Assembly with ease. Chaz Nuttycombe, the director of Virginia-based election forecaster CNalysis, explains, “Democrats wouldn’t be in the majority in the Virginia House if Trump had lost in 2016.”

But all of that robust interest still tends to favor the known quantity. Terry McAuliffe, a Clinton associate who previously served as governor from 2014 through 2018—but was barred from immediately seeking reelection by Virginia’s unusual incumbency laws—has been heavily favored to replace Gov. Ralph Northam since he entered the race in December. A recent Roanoke College poll found half of Democratic voters are backing him—more than four times the number who said they’re supporting Carroll Foy, who garnered just 11 percent of support. Nuttycombe expects that most of the incumbent Democratic state lawmakers also will prevail on Tuesday.

McAuliffe benefits from what is, effectively, incumbent status, with the advantage of name recognition and experience none of the other candidates possess. But the instinct to choose him again is another lingering effect of Trump’s presidency, says veteran Democratic strategist Joe Trippi. He likens Virginia’s Democratic primary voters to their counterparts in California in 2010, when they chose Jerry Brown as their gubernatorial candidate after eight years of Republican Gov. Arnold Schwarzenegger. “They wanted someone who could run the damn governors’ office,” Trippi explains, “who knew where the damn light switch was.”

It’s the same impulse—“Give me the old shoe,” as Trippi puts it—that drove Democratic primary voters to Biden in 2020 after they flirted with every flavor of Democrat in another historically diverse field. In early 2019, Virginia Democrats suffered the added misery of multiple scandals in Richmond when a photograph of Northam donning blackface in college surfaced—just as lieutenant governor Justin Fairfax, who is also running for governor, faced accusations of sexual assault.

But the scandals never gained sustained traction facing the headwinds of Trumpism, and Democrats continued to thrive, leading to 2021’s broad, diverse field. “The bench of people running in Virginia is so much deeper and more diverse than it’s ever been in my lifetime,” Tom Perriello, a former Democratic Virginia congressman who ran to the left of Northam during the 2017 primary, tells me. Candidates “are not waiting to be the future of the Democratic Party in Virginia, regardless of whether they sit in the legislature, advocacy groups, or statewide office.”

“The bench of people running in Virginia is so much deeper and more diverse than it’s ever been in my lifetime.”

The range of ideas has continued to force the party leftward—even if the candidates proffering those ideas don’t survive their primaries. The 2017 gubernatorial primary offers a precedent for progressive policies flourishing in Virginia in part as the legacy of past Trump-era primaries. Northam, for example, closed the gap between himself and Perriello by adding several of his rival’s reforms, such as a $15 minimum wage and debt-free community college, to his platform. Versions of both proposals became law once Democrats took control of the legislature.

McAuliffe faces “a new generation of candidates,” says Atima Omara, a Democratic political consultant based in Virginia, ones with “a more progressive vision for American that is multiracial and multiethnic.” For example, Carroll Foy has staked out a lane to McAuliffe’s left, while McClellan has called herself a “practical progressive.” Neither have taken up the mantle of the Squad, but their positions have forced McAuliffe to react accordingly. During his last stint in the governor’s mansion, he promised to “always going to come down on the side of law enforcement;” these days, he emphasizes his achievement as governor to restore the voting rights of more than 150,000 convicted felons. He also refused to accept campaign money from Dominion Energy, the Virginia utility behemoth and major political donor—a source of funds more of the Commonwealth’s Democrats have been swearing off as the party moves leftward.

Omara compares McAuliffe’s approach to Biden’s. Just as the president came into the Democratic presidential primary as a more moderate voice but shifted toward more progressive stances, so too has McAuliffe. “The changing electorate has moved Terry McAuliffe to respond to economic and racial justice,” Omara says. “He’s much more obliged to respond to that than he was before.”

In the end, Virginia may no longer claim its status a bellwether for much of anything anymore, Trippi says. Its increasingly blue tinge with each passing election since Obama’s 2008 victory has all but eliminated its swing-state status. And while Trump probably accelerated Virginia’s moves to the left, those changes had already been underway, explains Annie Weinberg, a veteran elections strategist who has advised Virginia candidates and voter turnout efforts. She points to the “electorate-transforming” campaigns won by candidates of color, such as current and former Dels. Carroll Foy, Elizabeth Guzmán, and Hala Ayala, all of whom organized voters who hadn’t received regular attention from party officials. “Some of these shifts are happening over the long term and are divorced from the Trump effect,” Weinberg says.  “It’s not just about people being energized to go out and fight him.”

The open question now is whether grassroots activism stays strong. Reed, of Sterling’s local Indivisible group, is preparing for what happens after Tuesday, when she and her fellow activists will begin filling in the names of the primary winners on get-out-the-vote postcards they’ve already penned for November’s general election. As for those protests? They’ve ceased entirely. But who knows for how long. “If an issue comes up that we want people to act on,” Reed says, “it will start again.”