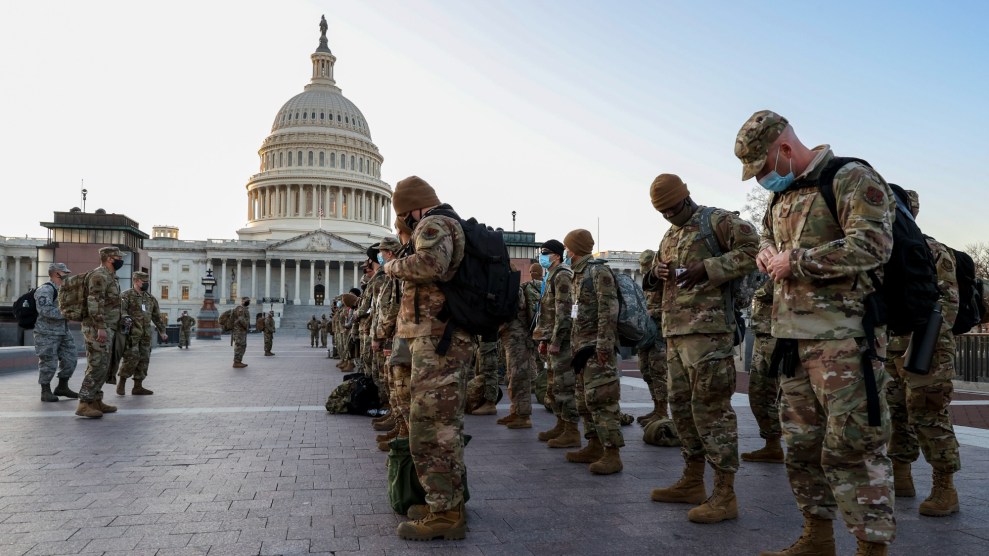 On Friday morning, a group of progressive lawmakers publicly pushed against including military spending in the Biden administration’s compromise $579 billion infrastructure bill.

In a letter to Speaker of the House Nancy Pelosi (D-Calif.) and Senate Majority Leader Chuck Schumer (D-N.Y.), 21 lawmakers, led by Reps. Barbara Lee (D-Calif.), Mark Pocan (D-Wis.), and Cori Bush (D-Mo.), called for no new Pentagon spending, which stood at $703.7 billion in 2021, in the eventual infrastructure plan.

“It makes poor economic and security sense to use this plan to funnel more money into the Pentagon,” the letter states. “Doing so will not provide the jobs that Americans need; build a better, greener economy; or make people in this country safer.”

Biden’s American Jobs Plan, the framework for a national infrastructure overhaul, doesn’t really include military spending at the moment. It has funding for veterans’ hospitals. And also money sent to federal science agencies that is justified, much like the defense budget overall, as investment in research and development as a way to “out-compete China.”

But that could change. The bill has already been cut down significantly from a potential $2 trillion package nearing a version of the Green New Deal to $579 billion in funding that doesn’t include nearly as much spending on efforts to fight climate change or a plan to enact a “clean electricity standard” for utilities. Some lawmakers want military spending to increase, too. In April, a bipartisan contingent of senators from states that house shipyards asked for $25 billion to upgrade these facilities.

“As lawmakers consider ways to improve our nation’s infrastructure, the facilities that support our Navy fleet should be a part of the conversation,” Sen. Roger Wicker (R-Miss.), the lead sponsor of the bill, told Defense News.

With infrastructure an early priority for the Biden administration, analysts and defense industry types have seized on the opportunity to modernize aging shipyards. “The nation’s industrial base isn’t meeting the minimal peacetime demands placed upon it,” Jerry Hendrix, a retired Navy captain who now works at a defense firm, wrote in an April Wall Street Journal op-ed. “If Mr. Biden is serious about infrastructure, he should pay attention.”

The Heritage Foundation, whose analysts have criticized Biden‘s defense budget as not large enough, said “it would be a mistake not to consider the Navy’s and the nation’s maritime industry as strategic infrastructure” in a piece co-written by senior fellow Brent Sadler and research associate Maiya Clark. The piece urged Biden to adopt Wicker’s plan to fund the Navy’s 20-year shipyard modernization plan in one fell swoop, instead of through the annual budgeting process.

Few analysts dispute that the Navy’s shipyards are in need of improvement, especially in areas especially prone to flooding because of climate change. But progressive lawmakers, who unsuccessfully lobbied Biden to cut defense spending in his first budget as president, oppose this effort to bypass the normal defense appropriations debate.

“While we do not deny that in some cases the need for military infrastructure modernization exists, funding for these projects should be debated and determined through the regular defense budgeting process, as it is every year,” the letter states. “Given that spending on the Pentagon is already at one of its highest levels since World War II, there should be ample funding within the Department’s budget to address any issues with military facilities by cutting waste and eliminating unnecessary weapons systems, without tapping into the administration’s infrastructure plan.”

The Biden administration’s push for a landmark infrastructure bill kickstarted a conversation among Washington politicos about how broadly infrastructure should be defined. Would electric cars, access to the Internet, and even caregiving apply? The Navy’s shipyards are a natural part of that conversation—a unique mix of adapting to climate change and extending military spending. The need to modernize shipyards is itself a product of extreme weather and flooding brought on by global warming.

“We should not throw more money at the Pentagon or weapons companies to continue the status quo,” the progressive lawmakers concluded, calling on Democratic leadership to “focus on a just green transition for all industries and provide a foundation for working people to prosper.”