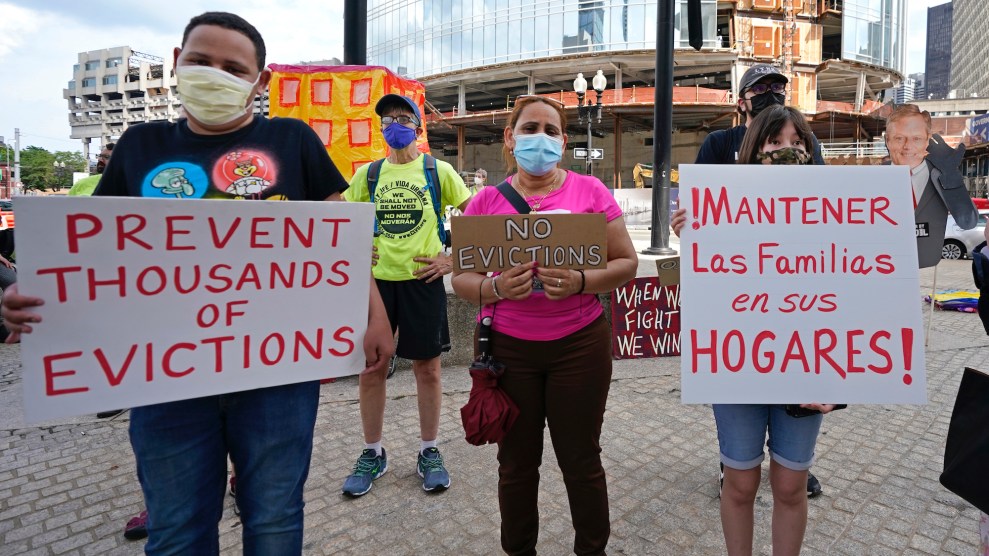 People hold signs during a rally in Boston in June to protest the prospect of mass evictions after a nationwide moratorium expires on Saturday.Elise Amendola/AP

The Biden administration will allow the nationwide eviction moratorium to expire on Saturday following a June Supreme Court decision that limited its ability to keep the ban in place. The moratorium is ending despite the fact that the vast majority of federal rental aid still hasn’t been spent.

In December, Congress appropriated $25 billion of emergency funding to get money to tenants at risk of eviction after falling behind on rent payments. But more than half a year later, just 12 percent of that money has been used, the Washington Post reports. In March, Congress set aside another $21.5 billion to help those renters. Even less of that funding has been distributed.

Unlike the stimulus checks quickly sent out by the federal government, state and local governments were put in charge of distributing the money Congress allocated for the Emergency Rental Assistance Program. Part of the problem, according to the Post, is that state and local governments were quickly overwhelmed by the number of applications for rent payment assistance they received from renters in distress. More than 6.4 million American households were behind on rent by the end of March, according to government data. Earlier in July, some 3.6 million Americans said they were at risk of being evicted within the next two months.

Still, many states have been shockingly inept at getting money to people in need. New York, for example, has $2.7 billion set aside for helping renters. But the state is only now sending out the first batch of aid. It’s starting by distributing $117,000 to test its payment system—just 0.004 percent of the total. The failure to quickly distribute the nearly $50 billion Congress provided for tenants at risk of eviction will make people in New York and other states more likely to lose their housing once the eviction moratorium expires on Saturday.

Speaker Nancy Pelosi (D-Calif.) is potentially trying to set up a vote on a bill introduced by Financial Services Committee Chairwoman Maxine Waters (D-Calif.) to keep the moratorium in place until December, Bloomberg reports. “The fact is children and families are going to be on the street,” Waters said about what would happen if the ban expires.

The Biden administration is also pushing Congress to keep an eviction moratorium in place. The initial version of the moratorium was instituted through executive action. In June, Justice Brett Kavanaugh wrote in a 5-4 decision that extending the eviction ban past July would require Congressional action.

“President Biden would have strongly supported a decision by the CDC to further extend this eviction moratorium to protect renters at this moment of heightened vulnerability,” White House Press Secretary Jen Psaki has said. “Unfortunately, the Supreme Court has made clear that this option is no longer available.”