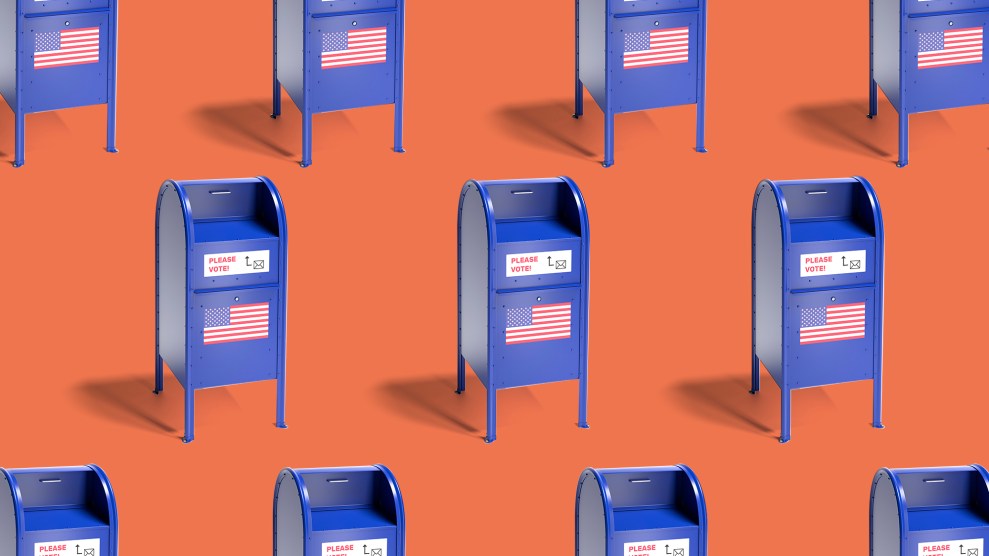 Facts matter: Sign up for the free Mother Jones Daily newsletter. Support our nonprofit reporting. Subscribe to our print magazine.
Since the arrival of COVID-19, our lives have shifted in ways big and small. Most likely, the pandemic will not end with a bang—we’ll be dealing with some version of it for years to come. As we slowly adapt to our new normal, we’ll embrace some changes and resent others. A few of us at Mother Jones wrote about some of the shifts we’ve noticed in our personal lives and the world around us—from the “love it” to the “leave it” to the “we’re still figuring it out.” Read the rest of the essays here.

During the 2020 election, there was only one early voting location in the town where I live in New York’s Hudson Valley. My wife was determined to vote early to avoid problems on Election Day, but every time she drove by the polling site at the local community center, the line stretched hundreds of people down the hill, with cars parked all along the busy main road. She finally decided to wait in the rain for two hours on the Wednesday before the election.

In contrast, I voted by mail from the comfort of my living room, like so many other Americans in 2020. I didn’t have to stand in the freezing rain, or wait two hours, or worry that I might contract COVID-19 at the polls. Mail voting had previously been highly restrictive in New York—you needed to have a valid excuse, such as being out of town or having an illness that prevented you from going to the polls—under penalty of perjury, to qualify for a mail ballot and then send in a paper application to your county board of elections to receive one. But last September, after these restrictions were waived, I requested my ballot online and cited the pandemic as my reason. I had weeks to research the candidates and make sure I filled everything out correctly, then sent it back in early October, with plenty of time to spare.

The record number of Americans who said they would vote by mail for the first time in 2020 led to widespread fears of an election meltdown. Would President Trump’s efforts to sabotage the United States Postal Service cause hundreds of thousands of ballots to be rejected because election officials didn’t receive them in time? Would voters be disenfranchised because of minor technicalities, like forgetting to sign their ballots or mismatched signatures? Would election officials be able to count so many mail ballots in a timely manner?

One of the major surprises of the 2020 election was how smoothly mail voting went. At least 30 states relaxed their vote-by-mail requirements in response to the pandemic, and the number of Americans who voted by mail more than doubled, from 21 percent in 2016 to 46 percent in 2020, according to the MIT Election Data survey. Though half a million ballots were rejected during the primaries in 2020, when many states struggled to adapt to the rise in mail voting, the number of rejected mail ballots in the general election actually decreased from 2016. And despite Trump’s lies about “vote dumps” for Joe Biden as ballots were slowly counted in states like Michigan and Pennsylvania after Election Day, the 2020 election was judged by Trump’s own administration to be the most secure in US history.

Though the numbers of Americans voting by mail will likely decrease once the pandemic is over, mail voting should be here to stay. Eighty-one percent of people who voted by mail in 2020 said they were likely to do so again in the future, MIT found. The 10 states with the highest voter turnout in 2020 all allowed easy access to mail voting, and five of them sent ballots to all registered voters. When Major League Baseball pulled the All-Star Game out of Atlanta to protest Georgia’s voter suppression law, it was telling that the league moved the game to Colorado, which automatically sends mail ballots to all voters.

Of course, Republicans are doing everything they can to make sure mail voting doesn’t increase in the future. More than half of the anti-voting bills passed by state legislatures this year restrict access to mail voting by giving voters less time to get mail ballots, adding confusing new rules for how to cast them, limiting drop boxes that millions of Americans used in 2020, and preventing election officials from sending out absentee ballot application forms. The moves could backfire on the GOP, since core Republican constituencies, like elderly and rural voters, relied on mail voting before Trump demonized it. The Democrats’ sweeping democracy reform bill, the For the People Act, would stop these efforts by requiring all states to adopt no-excuse absentee voting and mandating access to conveniences like drop boxes, but in June, it was blocked by a Republican filibuster in the Senate.

The 2020 election had the highest turnout in 120 years in part because people had more options to vote than ever before—through the mail, during early voting at the polls, and on Election Day. Despite GOP efforts to make mail voting harder after more Democrats than Republicans used it in 2020, that level of convenience should become the new normal in American politics.