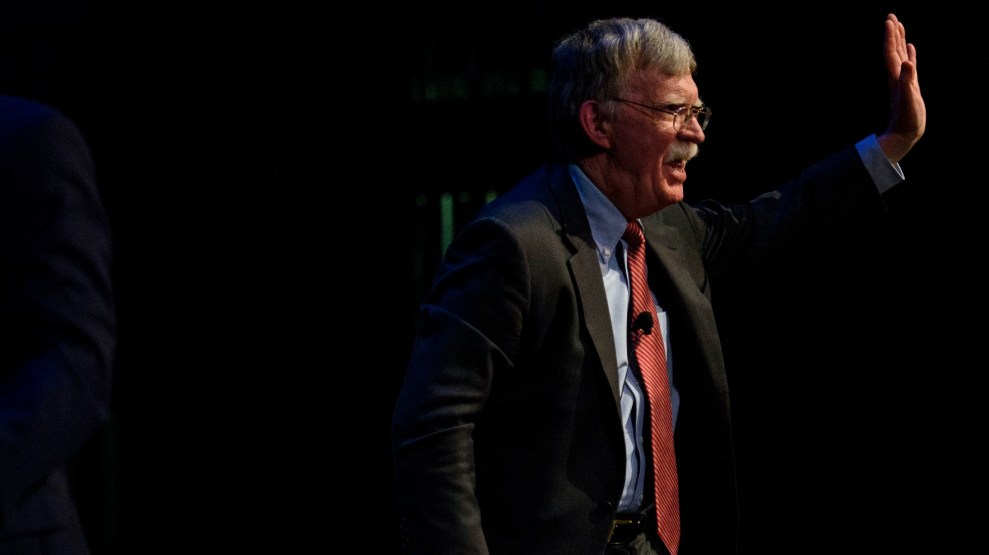 Over the past two weeks, virtually every national security expert has found a way to weigh in on the United States’ chaotic departure from Afghanistan. But at a time when the foreign policy conversation in Washington, DC, is so dominated by China, it was inevitable that the withdrawal would become a referendum on the hawkish right’s preferred bogeyman.

“This Trump-Biden withdrawal is a big mistake,” John Bolton, former Trump National Security Adviser and perhaps the foreign policy community’s leading hawk, tweeted as the Taliban took control of the Afghan capital. “Beijing and Moscow they are laughing.” Stephen Bryen, a former Defense Department official and Senate committee staffer who frequently writes for conservative media outlets, arrived at a similar conclusion. “They are dancing in Beijing,” he wrote. “Not only do they get East Asia, but they also get Afghanistan.”

“They are dancing in Beijing,” wrote one former Defense Department official. “Not only do they get East Asia, but they also get Afghanistan.”

Other China hawks quickly seized on the withdrawal as evidence that Biden won’t be able to stand up to China. The Epoch Times, a news outlet affiliated with the Chinese spiritual movement Falun Gong, has published several articles linking Biden’s approach to Afghanistan as reason to worry about his China policy.

The quick pivot to China should not come as a surprise. For years now, China has been treated as a Final Boss-level threat. Pete Hoekstra, Trump’s ambassador to the Netherlands, wrote last week that the Chinese government “intentionally facilitated the spread of the COVID-19 virus globally” and must be held accountable “for a great act of evil that has claimed many more American lives than even Osama bin Laden and his thugs did two decades ago.” (China has not cooperated with international attempts to discover the virus’ origin, but a US intelligence community report concluded last week that it was not created as a bioweapon.)

Of course, Biden’s domestic critics are overstating how soft his policies have been toward Xi Jinping’s government. Biden mostly kept Donald Trump’s tough China policy in place and has even defended the Afghanistan withdrawal as a necessary step in pivoting toward China. “Our true strategic competitors—China and Russia—would love nothing more than the United States to continue to funnel billions of dollars in resources and attention into stabilizing Afghanistan indefinitely,” he argued in an August 16 speech. When Secretary of Defense Lloyd Austin unveiled the Pentagon’s budget request in May, he similarly identified the need to stay “true to our focus on the pacing challenge from the People’s Republic of China.”

While Biden is not nearly as hawkish on China as some of Trump’s advisers, they all share a belief in the same “great-power rivalry” framework that has made conflict with China seem so inevitable. Biden’s neoconservative critics, however, believe that an occupied Afghanistan is a valuable spot to maintain equipment, launch attacks, and preserve US access to precious metals that mostly come from China.

Look no further than the arguments China hawks were making months before the withdrawal. Rep. Michael Waltz (R-Fla.), who once said the United States was “in a cold war with the Chinese Communist Party,” wrote following Biden’s withdrawal announcement that the US military needed to keep control of an Afghan airfield to preserve its ability to fight China. “Many analysts believe that should the United States and China come to blows in the Pacific, a second front will be critical given China’s ability to concentrate its naval and missile assets around Taiwan,” he wrote.

Other China hawks have made the more nebulous point that a US withdrawal gives China space “to fill the power void left by [the] Americans.” China, which maintains a small border with Afghanistan, has increased its trade with the country in recent years and signaled its interest in working with the Taliban. But the notion that it stands to benefit from a US withdrawal is murky at best. For all the foreign policy coverage that has treated the US withdrawal as a victory for China, it is unlikely that Beijing wanted the Taliban to take power.

Rather than just rejoice over a public US failure—which Chinese diplomats, of course, did—they have also sounded a more cautious, even frightened tone. Colonel Wu Qian, a Chinese national security spokesperson, said earlier this month that the United States “bears an inescapable responsibility for the current situation in Afghanistan” and “cannot leave it alone and shed its ‘burden’ on regional countries.”

“It is important to remember that China opposed a unilateral US withdrawal from Afghanistan and will now have to devote more resources to securing its western border and dealing with other challenges in the region around Afghanistan,” Will Ruger, an official at the libertarian Charles Koch Institute and a prominent supporter of the US withdrawal, told me. “If you are someone who is worried about potential Chinese aggression in the Pacific, then you should be pleased with this development.”