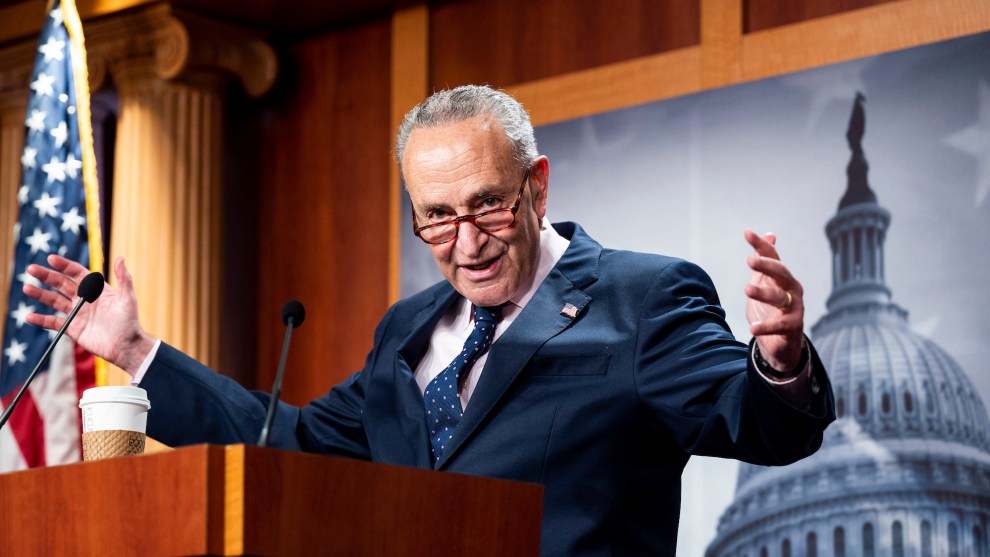 In the wee hours on Wednesday morning, Republicans once again prevented a vote on the For the People Act, the sweeping democracy reform bill that passed the House in March but was blocked by a Republican filibuster in June.

Later Wednesday, law enforcement in Texas began issuing civil arrest warrants to compel House Democrats who fled the state in July to return to the chamber so that Republicans would have a quorum to pass a sweeping voter suppression bill.

And on Thursday, the Census Bureau is set to release population data that will be used for redistricting this year, where Republicans have a major advantage over Democrats in drawing new legislative maps.

Republicans are rushing to tilt the country’s voting laws in their favor, and Democrats are running out of time to stop them. Eighteen states have already enacted 30 new laws making it harder to vote, and Texas may soon join them. Republicans could adopt new redistricting maps in a matter of weeks that could freeze Democrats out of power in key states for a decade. The GOP will likely be able to retake the House based on gerrymandering in Florida, Georgia, North Carolina, and Texas alone, according to a recent Mother Jones analysis.

Senate Majority Leader Chuck Schumer said voting rights will be the “first matter of legislative business” when the Senate returns from its August recess in a month. Democrats are planning to take up a compromise bill spearheaded by Sen. Joe Manchin (D-W.Va.). It is expected to include core features of the original For the People Act, such as such as automatic and Election Day voter registration, two weeks of early voting, and a ban on partisan gerrymandering, while adding new new provisions aimed at countering GOP laws that subvert election administration—laws that could lead election results to be overturned in states like Arkansas and Georgia. In an effort to attract Republican support, it adds a nationwide voter ID requirement, though one with enough limitations and exceptions that it’s unlikely to win enough GOP votes for passage.

Democrats have two big problems. First, they have yet to outline a clear strategy for overcoming a GOP filibuster. “We have reached a point in this chamber where Republicans appear to oppose any measure, any measure—no matter how commonsense—to protect voting rights and strengthen our democracy,” Schumer said on the Senate floor on Wednesday. Second, even if they do pass a bill, it might not come in time to roll back the gerrymandered maps that could be drawn by Republicans in a matter of weeks.

The simplest strategy for Democrats to overcome GOP obstruction would be to change Senate rules in order to exempt voting rights legislation from the 60-vote requirement, but Manchin said recently he “can’t imagine” supporting that. Another option would be to bring back the “talking filibuster,” requiring 41 Republicans to actually hold the floor in order to block a bill, an idea Manchin and President Biden have supported. That would put the onus on the minority party to actively block a bill and cut off debate after a certain period of time. Whether Democrats can persuade Manchin to support a simple majority vote to pass legislation, rather than a 60-vote requirement, once debate has expired remains to be seen.

“We have reached a point in this chamber where Republicans appear to oppose any measure…to protect voting rights,” Chuck Schumer said Wednesday.

Democrats are adopting a two-pronged approach to fight new voter suppression efforts. The House is coming back in session in August to pass a new version of the John Lewis Voting Rights Advancement Act, which would require states with a history of discrimination to once again clear their voting changes with the federal government. A similar bill passed the House in 2019 but never came up for a vote in the Senate, which Republicans controlled at the time. Only one Republican, Sen. Lisa Murkowski of Alaska, has signed onto it, so Democrats will need to reform the filibuster to pass it as well.

“At some point, we’re going to get to a binary choice between protecting our democracy and protecting an arcane Senate procedure,” former attorney general Eric Holder told me recently. That point is quickly approaching.

When Texas Democrats fled to Washington on July 12, they stressed the need for urgent congressional action to protect voting rights. “We are living on borrowed time,” a group of Texas Democratic leaders said in a statement. “We need Congress to act now to pass the For the People Act and the John Lewis Voting Rights Act to protect Texans—and all Americans—from the Trump Republicans’ nationwide war on democracy.”

A month later, those measures are still not close to becoming law, and Democrats risk squandering what Amy Klobuchar, a co-drafter of the revised For the People Act, called a “once-in-a-century moment to protect people’s right to vote.”