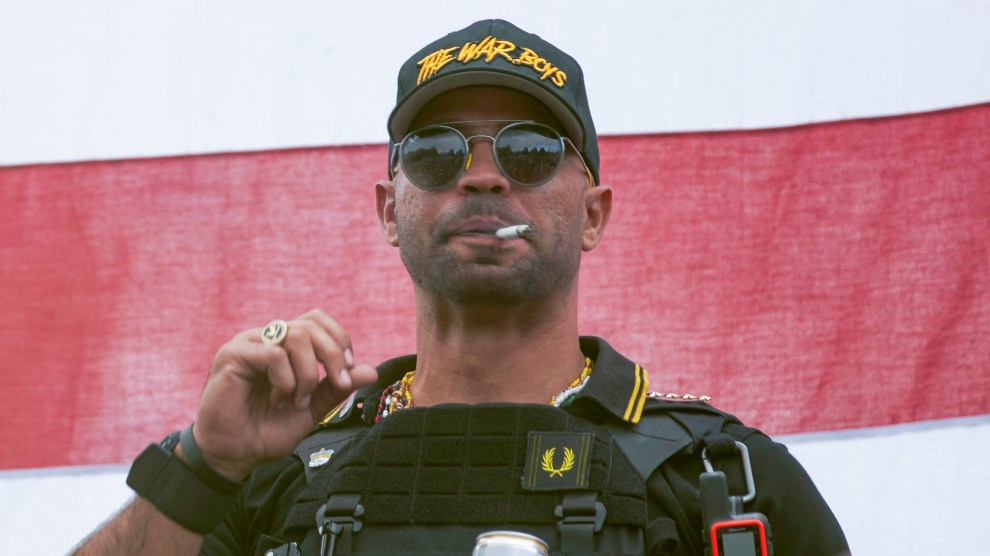 Enrique Tarrio, the swaggering “chairman” of the violent far-right group known as the Proud Boys, says he’s no longer proud of leading a mob that destroyed the property of a historic Black church in Washington, DC, late last year.

On Monday, Tarrio was sentenced to more than five months in jail on two misdemeanor charges, after admitting guilt in a plea deal in July. Following a pro-Trump rally in Washington on December 12, Tarrio led the burning of a Black Lives Matter banner stolen by a group of Proud Boys from the Asbury United Methodist Church, located near the White House. Several weeks later, Tarrio was arrested by DC police, who found him to be carrying two high-capacity rifle magazines emblazoned with the Proud Boys logo into the nation’s capital just ahead of the January 6 insurrection.

A leader since 2018 of a group known for antagonistic rallies on behalf of President Donald Trump and street brawls targeting “antifa,” Tarrio expressed remorse during his sentencing hearing on Monday as he faced the prospect of doing time in a DC jail—a conspicuous shift from his previous gloating about attacks against BLM, and later Congress.

“I was the person that went ahead and put a lighter to it and engulfed it in flames,” Tarrio boasted. “And I am damn proud that I did.”

“In the burning of the BLM sign, I was the one who lit it on fire,” he declared on The War Boys, a Proud Boys’ podcast, last December. “I was the person that went ahead and put a lighter to it and engulfed it in flames. And I am damn proud that I did.”

On Monday, Tarrio told Judge Harold L. Cushenberry of DC Superior Court that he had made “a grave mistake” with that act. “I’d like to profusely apologize for my actions,” he said, noting that he “heard the grief” in the voice of the church’s senior pastor, the Reverend Dr. Ianther Mills, who spoke during the hearing about how her congregation felt terrorized by the “marauding band” of Proud Boys.

After Tarrio’s arrest in early January, he was banned from the city as the US Capitol was coming under unprecedented threat, including from numerous Proud Boy members who would later be charged in the siege of Congress. Tarrio wasn’t in DC on January 6, but he cheered on the attack through the social media platform Parler. Tarrio hailed the insurrectionists as “revolutionaries” and “heroes” and said that he was “enjoying the show” as the pro-Trump mob viciously beat police officers, threatened to murder the US vice president and House speaker, and took over the Senate chamber. “Proud Of My Boys and my country,” he posted. “Don’t fucking leave.”

Judge Cushenberry didn’t buy Tarrio’s mea culpa. “This court must respect the right of any citizen to peacefully assemble, protest, and make his or her views known on issues,” he said. “But Mr. Tarrio’s conduct in these criminal cases vindicate none of these democratic values. Instead, Mr. Tarrio’s actions betrayed them.” The judge added that Tarrio’s claim of an “innocent mistake” wasn’t credible and that he had no regard for DC laws: “He cared about himself and self-promotion,” Cushenberry said.

Notably, Tarrio’s efforts to profit from the MAGA politics of the Trump era have included his surreptitiously working to sell BLM T-shirts online. The tough-talking Tarrio proved to have another side as well: In late January, as federal prosecutors investigated a possible Proud Boys conspiracy in the Capitol siege, news emerged that Tarrio had a long record of working as an undercover snitch for the FBI, connected to his personal history of committing fraud.