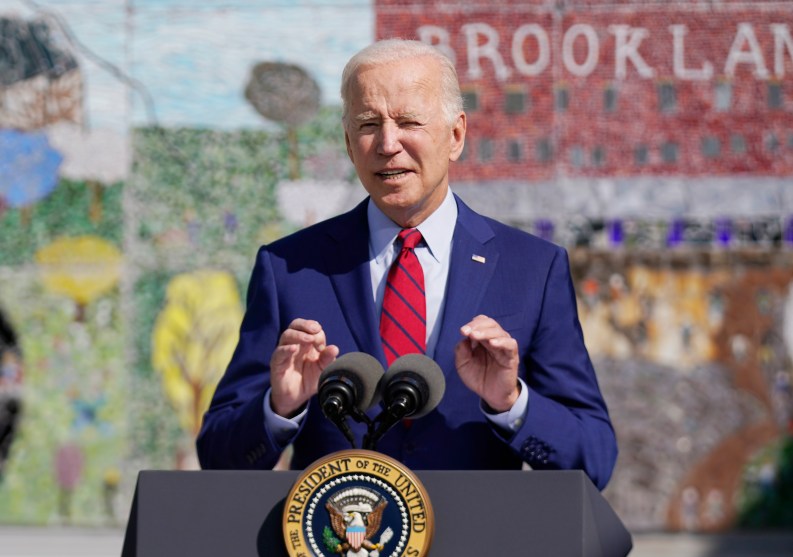 Speaking at a Washington, DC, middle school on Friday morning—where he announced steps to address the spread of COVID-19 in schools—President Joe Biden took a sharp poke at Republican governors who have not embraced public health measures to counter the pandemic.

During his remarks, Biden urged parents to get children over the age of 12 vaccinated. “It is easy, it is safe, and it is convenient,” he said, pointing to vaccination clinics that have been set up at DC public schools. He noted that 65 percent of children between the ages of 12 and 17 in the nation’s capital have received at least one shot—one of the highest rates in the country. He promised the students at Brookland Middle School that once they all are vaccinated, they can have a “special visit” to the White House. (“Maybe let you fly the helicopters.”)

“Some Republican governors have been so cavalier with the health of these kids.”

Biden said that he has used his limited presidential authority to compel certain educators—such as those who work in Head Start programs—to be vaccinated. He called on governors to require vaccinations for all other teachers and staff in schools. He also urged “regular testing programs” in schools, noting that the American Rescue Plan Act that he and Congress enacted earlier this year contains funding for this. He said he was using the Defense Production Act to force the production of nearly 300 million more individual rapid COVID-19 tests for distribution to schools and to retail outlets that will sell at-home tests at cost.

When Biden finished, a reporter shouted out that opponents of the president’s latest anti-COVID measures—including vaccination mandates—were calling these proposals an “overreach” and vowing “to challenge it in court.” He replied, “Have at it.” He paused and then continued:

I am so disappointed that particularly some Republican governors have been so cavalier with the health of these kids, so cavalier with the health of their communities. We’re playing for real here. This isn’t a game. And I don’t know of any scientist out there in this field who doesn’t think it makes considerable sense to do the six things I have suggested. But you know—let me conclude with this: One of the lessons I hope our students can unlearn is that politics doesn’t have to be this way. Politics doesn’t have to be this way. They’re growing up in an environment where they see it’s like a war, like a bitter feud. If a Democrat says right, everybody says left….I mean, it’s not how we are. It’s not who we are as a nation. And it’s not how we beat every other crisis in our history. We got to come together. I think the vast majority—look at the polling data—the vast majority of the American people know we have to do these things. They’re hard but necessary. We’re going to get them done.

As he left the podium, another reporter asked if his actions on COVID would further divide the country. Biden didn’t respond.

A recent Gallup poll showed that 61 percent of Americans support vaccination requirements for air travel, 53 percent back vaccine proof for dining out, and 56 percent favor vaccine mandates for their workplaces.