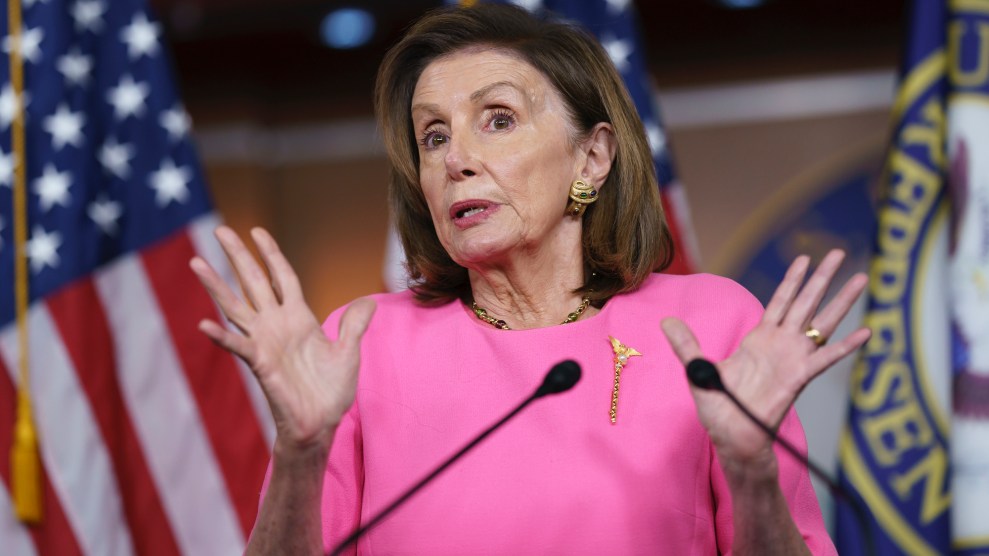 President Joe Biden has bet his legacy on a sweeping economic agenda that now awaits action in the House of Representatives. But on the eve of a key vote in Congress’s lower chamber, Democratic lawmakers from across the ideological spectrum remain as divided as ever on how to get that agenda over the finish line—or what it should look like when it gets there.

The White House’s economic proposals have been sorted into two bills: A $1.2 trillion bipartisan infrastructure bill the Senate passed in August and a $3.5 trillion budget bill that includes massive investments in health care, the fight against climate change, and the social safety net. House Democrats agreed to hold a vote on the infrastructure bill by September 27 at the urging of their moderate colleagues to whom passing a bipartisan, job-creating bill would prove to voters that Democrats can reach across the aisle and get things done.

But progressive lawmakers balked at the idea of passing the bipartisan bill by itself. The party’s most ambitious line items are in the $3.5 trillion budget bill, and Congress’s left flank feared that moderates would withhold support for the legislation once the bipartisan bill was on the president’s desk. (By virtue of the congressional budgeting process, the budget bill can pass with only Democratic votes, but it needs the vote of every Democrat in the Senate to pass.)

So progressive lawmakers are refusing to vote for the bipartisan bill until the House and Senate reach an “ironclad” agreement on a budget bill. So far, that hasn’t happened: A handful of moderate House Democrats have joined Sens. Joe Manchin (D-W.V.) and Krysten Sinema in raising doubts over the size of the bill, as well as how it will be paid for. The disagreement means the budget bill will almost certainly not be ready for a vote by the infrastructure bill’s Monday deadline. And on the Sunday political shows, House Democrats representing both sides of the intra-party debate spoke of the consequences of not having an agreed-upon budget bill as if they were living in separate political realities.

To hear Rep. Pramila Jayapal (D-Wash.) tell it, there’s little chance the House will actually hold a vote on the bipartisan bill without an accompanying budget agreement. “The votes aren’t there,” Jayapal, who chairs the Congressional Progressive Caucus, said on CNN’s State of the Union on Sunday morning. “The Speaker is an incredibly good vote counter,” Jayapal explained, and would not bring a doomed bill to a vote. But just moments later, Rep. Josh Gotteheimer (D-N.J.), one of Jayapal’s centrist House colleagues, joined the show and contradicted her. “We’re going to have the votes,” Gottheimer told CNN. “It will come up tomorrow, and we’re going to vote this week—early this week.”

Pelosi spoke for herself on ABC’s This Week and promised Democrats would pass the infrastructure bill “this week,” but demurred on the exact timeline. “We will bring the bill to the floor tomorrow for consideration,” she said, “but you know I’m never bringing a bill to the floor that doesn’t have the votes.” To choose an “arbitrary date” for passage would be foolish, she explained. “You have to go when you have the votes in a reasonable time.”

Pelosi downplayed tensions among her Democratic colleagues. “This isn’t about moderates versus progressives,” she said, noting that “95 percent” of congressional Democrats support both bills as written. She added that both bills together represent “President Biden’s agenda” and that “he will not confine his vision for the future” to just the bipartisan bill.

Pelosi’s stance allies her with progressives, who have also claimed the mantle of championing Biden’s agenda. “Ultimately, we’re delivering on the president’s agenda,” Jayapal said. “There’s a few people in the House and a couple in the Senate who aren’t quite there yet.” But Gottheimer countered that in not bringing the bipartisan bill to a vote Monday, Democrats are sitting on “historic, once-in-a-century” legislation. “I can’t explain to anybody why we have this separate bill sitting here,” he said, lamenting that bill would create much-needed jobs.

And what happens to the White House’s economic plan is just one of the tortured items on Congress’s agenda this week. The federal government will run out of money on September 30 if lawmakers don’t pass a resolution to keep funding it by that date. So, too, will the country’s surface transportation programs, if Congress doesn’t pass the bipartisan infrastructure bill that contains its replenishment. “September 30th is a date fraught with meaning,” Pelosi wrote to her Democratic colleagues on Saturday afternoon. “The next few days will be a time of intensity.”