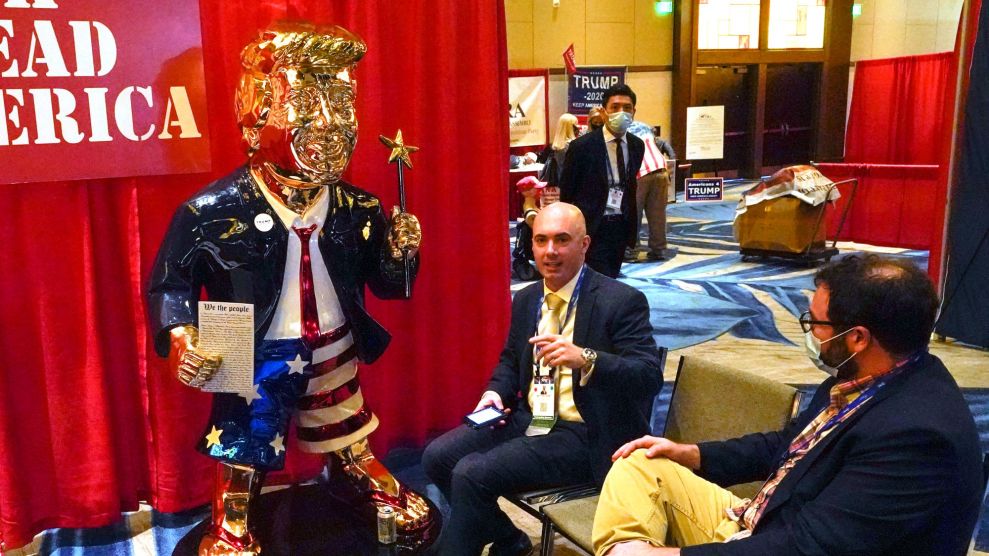 Editor’s note: This article first appeared in David Corn’s new newsletter, This Land. You can sign up for a free 30-day trial of This Land here.

A conservative outfit has announced it is organizing a rally on September 18 at the US Capitol to—get this—seek “justice” for the rioters arrested during the insurrectionist raid on Congress on January 6. The man behind this event is a former Trump 2016 campaign aide who after the 2020 election tried to cast himself as an independent elections expert and data analyst who had uncovered evidence of significant voter fraud. He also happens to be someone I’ve done a bit of reporting on.

Matt Braynard is the executive director of Look Ahead America, which describes itself as “an America First nonprofit dedicated to standing up for patriotic Americans who have been forgotten by our government.” Last month, he appeared on Steve Bannon’s podcast, Bannon’s War Room, and said that his group would be holding a demonstration at the Capitol “to push back against the phony narrative that there was an insurrection” on January 6. He insisted the mob that assailed Capitol Hill was “largely peaceful,” claiming that “this was a crowd that was egged on in many ways by Capitol police throwing flash-bang grenades into a relatively peaceful crowd.” Egged on? Did he not see even one of the videos from that day? More absurd, Braynard stated that this protest would “demand justice for ­­these political prisoners”—a reference to the seditious marauders, some of whom pleaded guilty, who have been pursued and prosecuted by the FBI and the Justice Department. His statement echoed Trump’s recent comments about the 1/6 rioters in which he said the people arrested were “military people, and they’re police officers, and they’re construction workers. And they’re tremendous, in many cases, tremendous people, tremendous people.” Trump remarked that it was “not right” that so many of them were “currently incarcerated.”

As for the rally on behalf of these “tremendous people” who brutally attacked cops, threatened to lynch Vice President Mike Pence, tried to thwart a constitutional proceeding, and threatened House Speaker Nancy Pelosi, Braynard vowed, “It’s going to be huge…We’re going back to the Capitol, right where it started.” 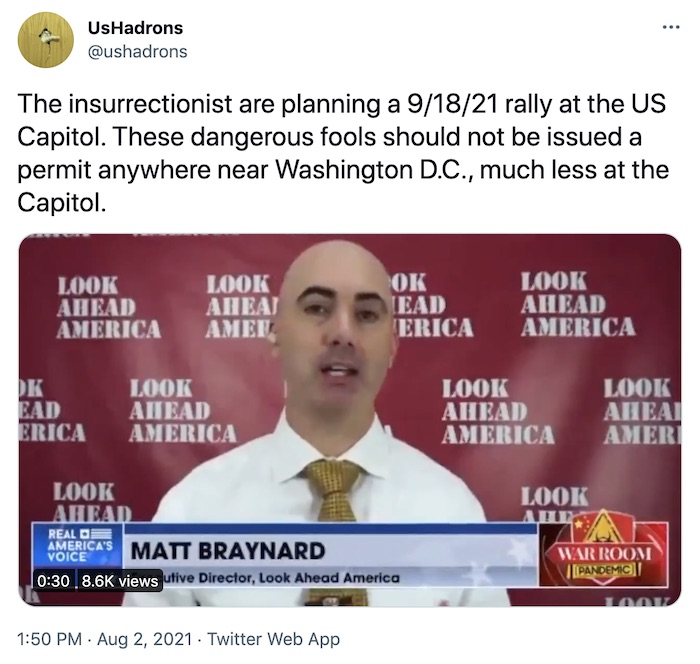 So now the Trump gang’s effort to whitewash this day of infamy and treason has a grassroots component that will try to replicate January 6. (Peacefully, of course, right?) I have no idea if Braynard and his organization, which doesn’t have much of a track record, can pull off a major event. (The group has fewer than 6,500 Twitter followers.) But this move further shreds Braynard’s already tattered credibility as a self-proclaimed elections expert whose work was frequently cited by pro-Trump forces to prop up Donald Trump’s Big Lie.

After the November election, Braynard, who worked on the data team for Trump’s 2016 campaign, raised over $700,000 for a project that collected supposed evidence of voter fraud. He produced what he described as analyses of the 2020 vote in swing states where he claimed massive amounts of illegal votes had been cast. During a hearing in Arizona, he testified alongside Rudy Giuliani, who as the personal lawyer for Trump was scheming to overturn the election. Braynard’s so-called data was actually used in a number of GOP lawsuits that sought (and failed) to nullify the election in key states. This was a lucrative enterprise for Braynard; he was personally paid large fees to serve as an expert witness on voting data in several of these court cases.

When I interviewed him in November after the election, Braynard insisted that even though he was a Trump superfan, his research was completely objective. He maintained that he “didn’t walk into this with any preconceived notions” regarding the possibility of fraud. He merely wanted to answer a question: “Is this really a clean election?”

When Braynard became embroiled in the fight over the Georgia results, he sent a letter to the state’s governor, attorney general, and secretary of state declaring that he had uncovered 21,000 illegal ballots there by analyzing various data sets. His findings were eviscerated by established experts. Stephen Ansolabehere, a Harvard professor and well-known expert in voting and statistics whose own work Braynard had cited in making his case, slammed Braynard’s findings and maintained there was “no scientific basis” for the claims. When Braynard appeared at an “elections investigative hearing” staged by Republicans in the Georgia House of Representatives, a Democratic legislator made mincemeat of his research. She had contacted people on his list of supposed illegal voters and discovered they in fact had voted properly in the 2020 election. Confronted by this damning information, Braynard had little to say. It was such a thorough and humiliating takedown that the exchange went viral.

With his announcement of a pro-January 6 demonstration, Braynard has revealed himself beyond any doubt to be the Trump toadie he pretended he wasn’t when he was trying to concoct evidence to back up Trump’s baseless accusations of election fraud. Characterizing the January 6 riot as a peaceful gathering, with any violence that occurred being the fault of the Capitol Hill cops, is an act of delusionary and pernicious propaganda. It is also potentially dangerous, as he attempts to create yet another grievance for Trump’s violent-prone loyalists. (In March, Braynard attended a conference held by the organization run by white nationalist Nick Fuentes, according to the Institute for Research and Education on Human Rights.)

There’s this other revealing detail. In 2017, Braynard, as part of the coursework for an MFA he was pursuing at Columbia University, created a literary magazine called Otoya, which was billed as a “Literary Journal of the New Nationalism.” The publication, Braynard explained in a brief editor’s note, was titled in honor of Otoya Yamaguchi, whose name may not be familiar to people outside of Japan. In 1960, Yamaguchi, a 17-year-old right-wing ultranationalist in Japan, brutally murdered Inejirō Asanuma, a legislator and chairman of the Japan Socialist Party. Yamaguchi stabbed Asanuma with a samurai sword at a televised election debate. The image capturing the horrific moment became one of the most famous news photos of the 20th century. After being arrested, Yamaguchi committed suicide and became a hero of the Japanese far right.

And he’s a hero for Braynard, too. His note described this murderer as a courageous nationalist who valiantly killed a leftist. He pointed out that Yamaguchi shared a birthdate “with another great patriot who put bayonets through the enemies who threatened his nation, George Washington.” In our interview, I asked Braynard about his admiration for Yamaguchi. He recalled visiting Cambodia, where he says he saw piles of skulls of victims who had been murdered during the bloody reign of the Khmer Rouge. “I think [Yamaguchi] may have prevented the same thing from happening in his own country,” Braynard said. “He should be memorialized and remembered.” Huh? There was no relationship between the leader of an established socialist party and Pol Pot, the psychopathic leader of the Khmer Rouge who was responsible for the genocide of between 1.5 and 2 million Cambodians. Braynard was justifying a murderous act of political violence with historical gobbledygook. (Only one issue of Otoya was published.)

Braynard shows there is no distance between pushing the Big Lie and whitewashing the recent history of January 6. Both endeavors are essential and intertwined parts of the Trump cult’s assault on democracy. Braynard said there will be high-profile speakers at the September event, including members of Congress. Maybe. Given his research work after the election—and his description of what occurred on January 6—it’s not clear his powers of observation can be trusted. But his current venture was granted the Bannon seal of approval, an important imprimatur in Trumpworld. And that’s just another sign the Trumpists will not give up their attempts to deny reality to serve their Dear Leader. In this crusade, Braynard is a loyal foot soldier.