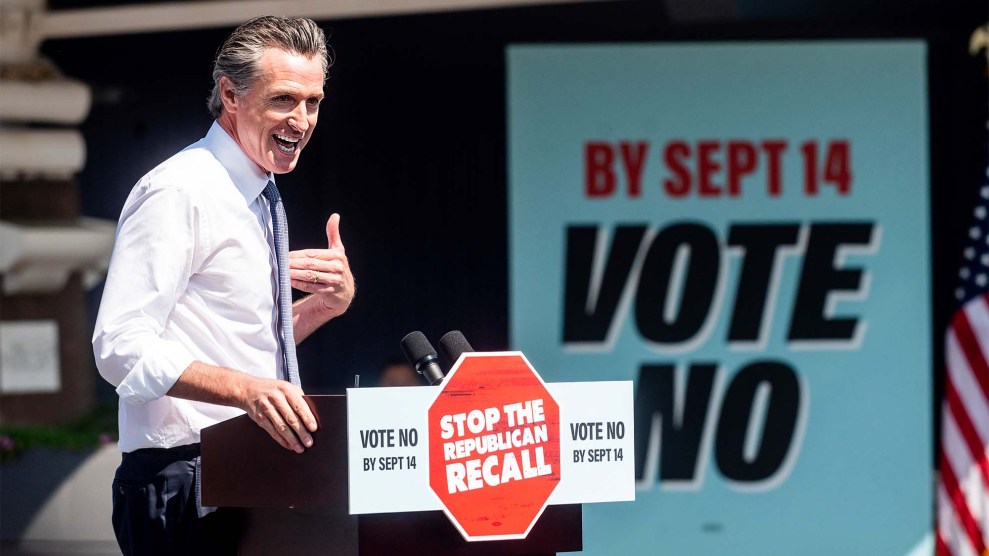 With just a handful of days before voting closes in California, Gov. Gavin Newsom can probably breathe a little easier: The latest polling suggests he’s poised to easily beat the Republican-led effort to recall him, a big change from this summer, when pollsters indicated that Californians were almost evenly split on the question.

A University of California, Berkeley, Institute of Governmental Studies poll released on Friday shows that 60 percent of likely voters opposed recalling Newsom in the September 14 election, compared with just 38 percent who supported doing so and fewer than 2 percent who hadn’t made up their minds. The poll, co-sponsored by the Los Angeles Times, was conducted between August 30 and September 6 and bolsters other recent polls that appear favorable to Newsom.

The shift in momentum comes after the governor’s team spent tens of millions of dollars on political ads and enlisted former President Barack Obama, Vice President Kamala Harris, Sens. Elizabeth Warren and Bernie Sanders, and other Democratic Party figures to campaign against the recall, which they’ve described as a dirty Republican attempt to void Newsom’s landslide election to office in 2018.

Forty-six candidates are running to replace the governor. As my colleague Lil Kalish has reported, they’re a motley crew including “a hog farmer, a sheriff, a self-described ‘Mandalorian warrior,’ a landlord slash YouTube influencer, a libertarian rapper, several actors, a university lecturer, a bail bondsman, a participant in the January 6 insurrection, and the front-runner, a right-wing radio host” named Larry Elder.

Six weeks ago, a poll by the UC Berkeley institute showed that the fight against Newsom might have a decent chance, with 47 percent of likely California voters indicating support for the recall; at the time, pollsters suggested that many Democrats in the state seemed indifferent toward the election, or more indifferent than Republicans.

But since then, Newsom’s campaign has made inroads with his base by focusing criticism on the front-runner, conservative talk-show host Elder, a longtime Trump supporter who opposes the minimum wage and abortion rights and has vowed to quickly repeal all mask and vaccine mandates in California. Elder also has a record of misogynistic and racist comments, as my colleague Kalish reported. “Women know less than men about political issues, economics and current events,” he wrote in 2000. Earlier this year, he argued that “George Floyd might be alive had former President Barack Obama not, for eight years, consistently played the anti-cop race card.”

In recent weeks, Newsom has hammered home the public health consequences of supporting Elder, given his opposition to vaccine mandates. “Look at what’s going on across this country. Look at states that don’t believe in science,” Newsom said at a rally in the San Francisco Bay Area  on Wednesday, according to the Los Angeles Times. “This election is a choice about life and death.”

The strategy seems to be working for the governor. “When he was able to focus in on one candidate, one opponent, his numbers started to improve,” Dave Gilliard, a strategist leading the effort to recall the Newsom, told the Times when asked about the latest polling.

Of course, the polls could be wrong, or they could change. Newsom’s opponents are more likely than his supporters to cast their ballots in person on Election Day, according to political data researchers cited by the Times. But many more Californians have mailed in their ballots, especially Democrats, who outnumber registered Republicans in the state nearly 2 to 1. And Newsom was elected by a big margin, almost 24 percentage points, back in 2018.

As Republicans appear to lose momentum in the race, some are planting seeds to dismiss a Newsom victory next week as a hoax, much as Donald Trump did after the 2020 presidential election. “They’re gonna cheat, we know that,” Elder said at a campaign event Wednesday, pledging to file lawsuits. In a Newsmax television interview a day earlier, Trump was equally blunt. “So I predict it’s a rigged election,” he said of the recall. “Let’s see how it turns out.”