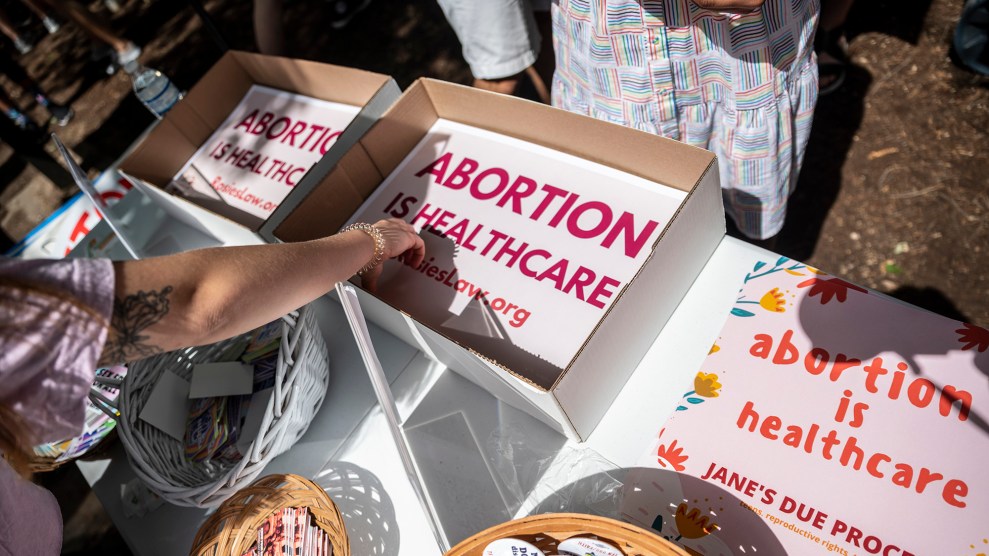 In May 2021, thousands of protesters came out in response to a new Texas bill outlawing abortions after six weeks.Sergio Flores/Getty

Last night, when I was up too late doomscrolling through Twitter while mourning the demise of women’s constitutional rights, I couldn’t stop thinking of my friend, who I’ll call Laura. Laura is an OB-GYN in Fort Worth, Texas. Since she moved there almost five years ago from the East Coast, our communication has shifted from our favorite trash TV shows to lamenting the bleak outlook for women and women’s health care in her new home state.

Even for someone who follows the news, the human consequences of Texas’ relentless assault on reproductive rights came as a bit of a shock to Laura—like when, shortly after she’d moved there, a pregnant woman in her early 40s and in a hostile relationship sought advice. “She was devastated and scared to get an abortion, personally and culturally, but knew she needed to do it,” Laura tells me. “So I counseled her, supported her, and went to my desk to call and schedule it.” The hospital representative asked how many weeks the patient was, and “just because it’s a new place [for me], I’m like, ‘It’s good to do an elective [abortion] here?’ The woman on the other side of the phone loses it and says, ‘Oh my gosh, absolutely not. We don’t do that.'”

Laura called three other places—hospitals and ambulatory surgical centers where she has surgical privileges. They all told her no. Laura had to go back to the patient and tell her she could not do it, and that she’d need to go to a clinic, but the woman balked. “She says she can’t do that—knows about the protesters. She says she could only do it after forming a bond with the doctor who counseled her: me.” Now, at least until the Supreme Court intervenes, the options are drastically worse for women like Laura’s patient.

Texas was never an easy place to be an OB-GYN, but when SB 8 took effect at midnight last night, banning abortions at six weeks and deputizing citizens to inform on people who “aid and abet” abortions, it became damn near impossible. (This is why Laura and I agreed not to use her real name or identify exactly where she practices.) Sure, Laura, who has privileges at a big private hospital in Fort Worth, rarely provides any abortions herself, but she can’t help but worry that giving her best medical advice will land her in court. She takes some solace in knowing that most of the brave people providing abortions “are together,” overwhelmingly working in clinics like Planned Parenthood and Whole Woman’s Health, where they will figure out the next steps. But, she says, that still “leaves behind counseling. When a young patient shows up, what can I say or do?”

We caught up on Wednesday morning to talk about what it’s like on the ground right now after this momentous change. She called from her car, parked at a church next to the “eerily empty” Whole Woman’s Health clinic in Fort Worth, which was one of the biggest abortion providers in the state. Our conversation has been edited for length and clarity.

Well, well, well. Sad to talk to you today.

Well, hello—just another day in the new but old America that is Texas.

This morning I was walking around the hospital and am like, Is anyone else thinking about this like I am? It feels normal here. Oh, are we all good? There are definitely people who I know for sure are anti-abortion, so I wouldn’t bring it up at work. But we got an email this morning saying something like: Reminder this went into effect today. It was mostly screenshots highlighting the language of the actual law.

What’s crazy is we all knew this was coming today, and just yesterday the legislature proposed another bill to ban medication abortion after seven weeks.

What’s crazy is we all knew this was coming today, and just yesterday the legislature proposed another bill to ban medication abortion after seven weeks. They’re just trying to pile on.

Tell me about this Therapeutic Termination of Pregnancy Committee that you work on.

The way it works at many hospitals in the South is that they have these committees that review cases involving medically indicated terminations—if someone finds out in their ultrasound there is a crazy complication or anomaly that is not compatible with life, they get counseling and may choose to abort rather than have a stillbirth or a baby who dies within a few hours. So hospitals have committees that approve medical termination. All other abortions mostly happen at clinics.

On the committee are two general OB-GYNs, two high-risk OB-GYNs, and a neonatologist. We need a quorum of agreement that the diagnosis is incompatible with life so we can go ahead with the termination. There are also pastoral services involved, but mostly in a supporting role.

But this committee basically doesn’t exist anymore, because we can’t do that anymore. The only exception [in the law] is very narrow and uncommon: when the pregnancy risks the life of the mother. No other exceptions—not rape, not incest, not the life of the fetus. In those cases? Hey, you’re gonna go ahead and carry it anyway!

Even in the committee, we haven’t talked about the law much. We had a meeting for an actual patient maybe two to three weeks ago, and we sort of talked about it then. But we were all in this space like, OK, there’s nothing to do. There’s nothing we can do to fight this individually. This just feels so big. And this is what advocates, organizers, and lawyers are for. There are doctors who do this stuff and you get involved if you have the time and energy, but it can’t be that way for every doctor.

Given all this, how are you feeling personally right now?

I just feel completely defeated. I’d say defeated and angry. Those have been my two largest emotions professionally for the past year.

I just don’t know what to do. I had a woman, for example, come to see me a month or two ago. She had accidentally gotten pregnant and was a mess about it. She was pretty sure she wanted an abortion, and we talked about it and all her options, and she did end up going to get an abortion. But now, if that happens, I have to say I don’t even know what I can legally say. The law is not clear enough. If I say abortion exists as a concept, can I get sued? And how are we to trust someone, even someone who comes in as a patient? I realize that’s superparanoid, but what if they’re setting us up and trying to get $10,000 to see what we say to them?

Well, what if someone comes to you and asks about an abortion?

I’d probably say you have to leave the state of Texas to do that. That makes me feel better personally—I think I’m allowed to talk about how you can get it in another state. Then I’m not aiding an abortion on Texas grounds. I need to brush up on my knowledge of things just over our borders. New Mexico and Colorado are gonna get busy.

As if it’s not already exhausting enough to spend millions of hours convincing people that COVID is real and to get a COVID vaccine, then this happens. It’s like, I don’t like my job. I should’ve gone into PR.