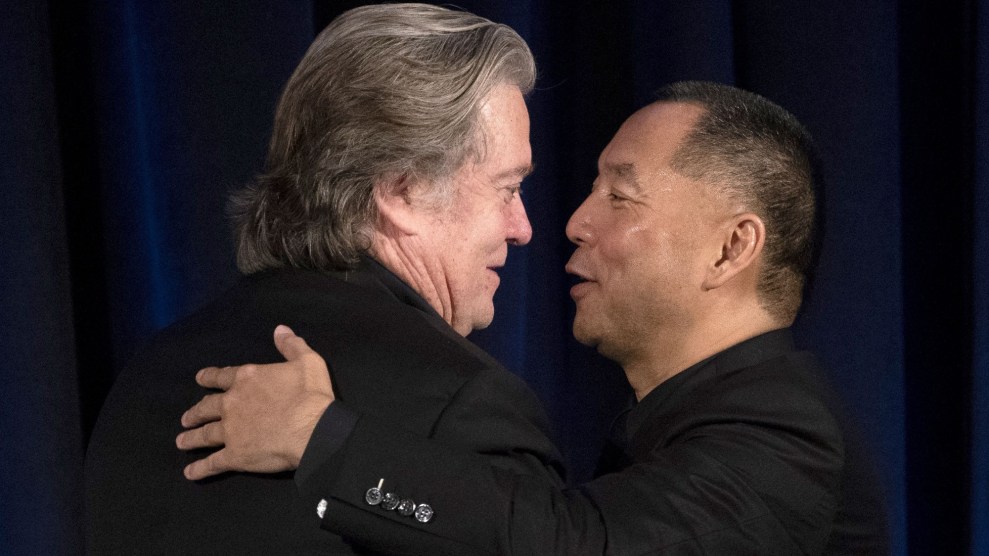 The SEC said the three companies—GTV Media Group, Saraca Media Group Inc., and Voice of Guo Media Inc.—last year raised $487 million from more than 5,000 investors without registering with the agency or providing investors with financial disclosures required under securities laws. Saraca is the parent company of GTV, which operates a social media platform and other media ventures. Voice of Guo was involved in raising money for GTV. Bannon has played a key role in Guo’s overall media business, working as a paid consultant and as a director of GTV, which he helped launch. A source familiar with companies said Bannon is no longer employed by Guo’s businesses.

The New York attorney general’s office announced Monday that it had also settled its own investigation into GTV and Saraca, the two New York–based firms involved in the stock offering.

GTV and Saraca said they were “pleased to have reached this solution, which achieves our goal of returning funds to our supporters, an objective we have had since these regulatory matters commenced.” Guo said on social media that his companies had been the victims of “dark forces” of China’s Communist Party, but he declared, “Our cooperation with the SEC has been a success!”

The settlement comes after a more-than-yearlong investigation into allegations by would-be investors in Guo’s media empire, virtually all Chinese speakers, that they were swindled by false claims he’d made in videos soliciting investments in the venture. More than 4,500 investors unable to put up a supposed minimum investment Guo claimed was required had pooled funds through Voice of Guo, an Arizona-based company. But “none of these investors ultimately was issued GTV shares,” the SEC said.

Bannon, who did not respond to a request for comment, has previously denied any involvement in the stock offering, and he is not mentioned in Monday’s SEC order. But he did help Guo build up a large online following among Chinese speakers around the world and establish nonprofit and for-profit entities that Guo has used to promote himself and raise money.

Bannon, who was Trump’s campaign chief in the final months of the 2020 presidential contest, began working for Guo shortly after he was forced out of the White House in August 2017. In 2014, Guo fled China, where he faced money laundering and other charges. Guo denies wrongdoing in those cases and claims he is being targeted as a dissident. He has applied for asylum in the United States. In 2017, he began alleging corruption by Chinese officials he claims to have worked closely with there.

In 2018, Bannon helped Guo launch two nonprofits, the Rule of Law Foundation and the related Rule of Law Society. The men have described those organizations as aimed at attacking the Chinese Communist Party. But those groups and an active online network linked to Guo have also pushed a slew of misinformation with little connection to China. This includes the false claim that Trump won the 2020 election but was cheated by electoral fraud; claims that left-wing antifa activists carried out the January 6 attack on the US Capitol; and various conspiracy theories related to COVID-19. Guo, for instance, recently suggested that China controls Pfizer and sabotaged the company’s COVID-19 vaccine.

Guo paid Bannon $1 million for consulting work for Guo’s media companies through a one-year contract signed in 2019, Axios reported. Guo also previously lent Bannon $150,000 and allowed him to use a private plane that Guo owns. Bannon has also lived in recent years on a 150-foot, $28 million yacht owned by Guo, at times sharing the boat with Guo. Bannon was arrested on the vessel last year and charged with defrauding a charity that raised money it said would be used to pay for private construction of a wall on the US–Mexico border. Trump later pardoned Bannon.

The SEC announcement was issued on the same day that the New York Times reported that according to a new book by Michael Wolff, interview transcripts appeared to show that Bannon had acted as a media trainer for Jeffrey Epstein in sessions Epstein used as practice for a 60 Minutes interview. Bannon told the Times that he was not providing media training and that the interview was actually part of a documentary about how Epstein was “encouraged and rewarded by a global establishment that dined off his money and his influence.”

Guo has been sued for allegedly using his online network to urge supporters to threaten and harass Chinese dissidents in the US and elsewhere. A former assistant has also sued him in New York for rape. Guo has denied all of these allegations. The lawsuits are ongoing.

The SEC’s announcement said that the commission’s investigation is continuing.