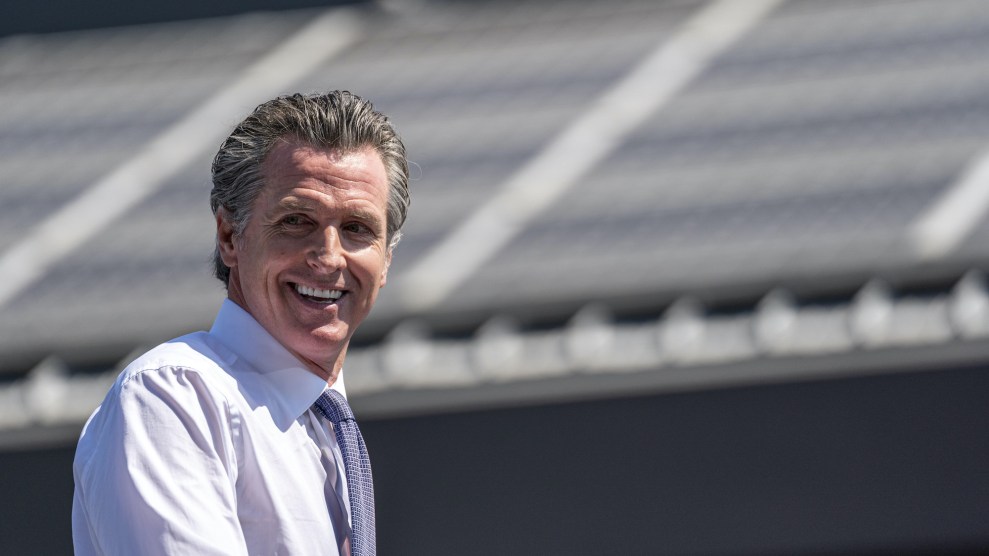 California voters have chosen to retain Democratic Gov. Gavin Newsom in the state’s high-profile gubernatorial recall election, with early results giving the first-term governor a landslide 70–30 mandate to remain in office. That means the Democratic-leaning state, which last recalled a governor in 2003, will retain its mask and vaccine mandates, its minimum wage, and its wide access to abortion—all of which leading Republican candidate Larry Elder had promised to abolish on taking office.

Elder, a Republican talk radio host born in South Los Angeles, won a substantial lead among replacement candidates, drawing four times as many votes as his closest rival. He was the leading opposition candidate for much of this year—despite (or thanks in part to) a long track record of racist and sexist commentary, as I previously reported:

Women know less than men about political issues, economics and current events,” Elder wrote in a 2000 op-ed; in an April 2021 editorial, he argued that “George Floyd might be alive had former President Barack Obama not, for eight years, consistently played the anti-cop race card.” Elder’s former fiance recently accused him of brandishing a gun at her while high and demanding that she get a “Larry’s Girl” tattoo.

Though the recall petition, launched by retired police sergeant Orrin Heatlie in February 2020, started life as “the fringe project of anti-maskers, QAnon believers, and the state’s ever-shrinking hard right”—as I noted earlier this month—it garnered wide appeal as the pandemic raged on, eclipsing the threshold of 1.5 million signatures to trigger a recall for statewide office. It also generated millions in political contributions, attracted a clown car of 46 gubernatorial hopefuls, and cost the state close to $300 million to administer.

At the polls in Los Angeles on Tuesday evening, voters expressed widespread frustration—either that the recall was happening at all, or toward Newsom himself. “It’s a terrifying thought for my whole family that a Republican could take power in this way,” says Punam Bean, 39, in Glassell Park. At a South LA park, Christina L., a 31-year-old hospital pharmacist, told me the recall is “a waste of money” and believes that only once the pandemic was reaching a turning point for the better—when Newsom mandated vaccines in hospitals—”that’s when the Republicans decided the recall should happen.”

Eddie, a 33-year-old construction worker who asked to be identified by only his first name, disagrees. Though he voted for Newsom in 2018, he says he was fed up with the governor after the French Laundry incident and the closures of businesses which cost him his livelihood. “I’m sick of this elitist group of people. I don’t want Nancy Pelosi’s nephew or a manufactured candidate,” Eddie told me at the Glassell Park Recreation Center. He says he wants to see “a person of color as governor,” and planned to vote for Elder.

The recall also became a focal point, briefly, of national politics. After earlier polling showed Newsom in peril, both President Biden and Vice President Harris traveled to California to show support for the embattled governor. The election of a Republican governor could have thrown control of the US Senate into uncertainty, as Democratic Sen. Dianne Feinstein’s expected retirement would give the state’s governor the opportunity to appoint a replacement.

Even before results came in, Republican recall supporters pushed a narrative that echoed 2020: The election was stolen. Donald Trump released a statement calling the recall “totally rigged”; on social media, false claims spread like wildfire. Recall supporters on Facebook fretted that the holes in their ballot envelopes would be used to sniff out their votes (the envelopes are designed to assist visually impaired voters in finding the signature line). Others offered stories about being given Sharpie markers at polling stations, apparent evidence that the election was a sham.

The fraud claims have become a rallying point for conservatives across the country, more than half of whom still believe the 2020 election was rigged against President Trump. Elder’s campaign helped lay the groundwork even before results were in: On Monday, his website launched an online form for users to submit affidavits of evidence of voter fraud. “We implore you…to join us in this fight,” the site reads—its URL is StopCAFraud.com—“by signing our petition demanding a special session of the California legislature to investigate and ameliorate the twisted results of this 2021 Recall Election of Governor Gavin Newsom.” The same day, Elder told NBC’s Jacob Soboroff that he wouldn’t commit to accepting the election results. Elder previously expressed interest in mounting a legal challenge to unfavorable results.

For now, California’s mask and vaccine mandates are secure. But the state in general, and the recall in particular, offer a glimpse at what New America fellow Lee Drutman says is “becoming the standard GOP playbook”: Don’t expect to win the popular vote? Discredit it.