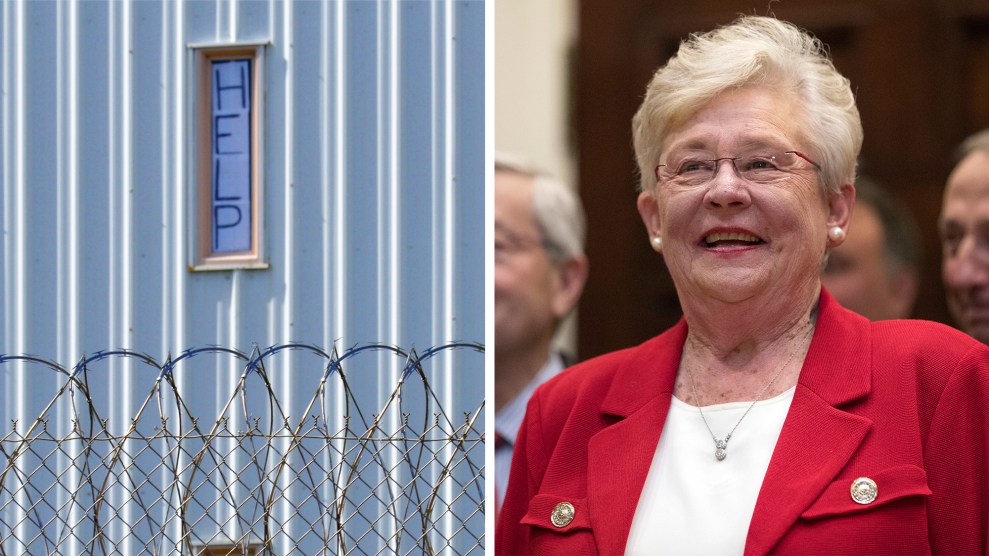 After years of searching for a way to finance a massive prison-building scheme, Alabama Gov. Kay Ivey has found her cash cow: Federal coronavirus aid.

Under legislation signed by Ivey at the end of a special session a little over a week ago, Alabama will spend $400 million in COVID aid—about 20 percent of the state’s $2.1 billion allotment from the American Rescue Plan Act—on a construction plan that advocates fear will lead to more people being locked in a prison system that’s currently being sued by the Justice Department for rampant violence, sexual abuse, excessive force, and poor living conditions.

The state justifies dipping into COVID aid by designating the $400 million as estimated “lost revenue”—money the state would have had in its coffers, to spend as it wished, if not for the pandemic. While the use of COVID relief money is governed by a complicated, interim Treasury Department rule, rescue funds used to replace “lost revenue” come with relatively few strings attached.

“This is opportunism at its best,” says Jim Carnes, policy director of anti-poverty nonprofit Alabama Arise and an expert in state budgets. “The strange thing is our budgets have fared rather well.”

In addition to the $400 million in COVID cash, the legislation signed by Ivey last week will allow the state to issue up to $785 million in bonds and tap into $154 million from its general fund for the prison-building project. If the plan goes through, here’s what the state will get for its (and our) money: Two new men’s mega-prisons of 4,000 beds apiece, a new 1,000-bed women’s prison facilities, and renovations to other facilities.

House Judiciary Chairman Jerry Nadler has asked the Treasury Department to block the use of COVID funds for the project, to Ivey’s ire.

For context, Alabama has one of the country’s highest death rates from COVID, and its vaccination rate ranks 45th among states, according to the Kaiser Family Foundation. “For you to use the money that was allocated for COVID-19 relief, safety, and health care, and to put it in prisons, where the Department of Justice has already declared you inhumane in your treatment, clearly shows that you’re inhumane,” says Pastor Kenneth Glasgow, a criminal justice reform activist in Alabama. “Not only to those who are incarcerated, but to those that are not incarcerated as well.”

To understand how Alabama got here, you have to go back at least four decades. In the 1980s, the state’s prison system was already plagued by crowding, violence, and mental health care problems. Alabama officials, faced with a federal takeover of the state prison system, went on a prison-building spree while passing extreme sentencing laws and resisting efforts to release more people from custody. (Alabama prisons as of last year have racked up $1 billion in deferred maintenance, according to Ivey.)

“We had really harsh sentencing laws, one of the worst three-strikes laws in the country, laws that permitted long prison sentences for drug possession, really aggressive prosecutors,” says Carla Crowder, executive director of the Alabama Appleseed Center for Law and Justice. “So the prison population just was growing, growing, growing.” The state built new prisons in the ’80s and ’90s but never allocated enough money to take care of them, Crowder says. Meanwhile, the mass incarceration machine sucked in more and more Alabamans.

Those new prisons didn’t fix the old problems. For decades, the Alabama corrections system remained vastly overcrowded and understaffed, with some facilities housing triple the number of people they were designed to incarcerate. The few modest sentencing reform bills that could get through the Republican legislature did little to provide a release valve for a system already close to exploding. By 2016, it finally did: Two violent uprisings at a men’s facility, as well as rampant sexual abuse at a women’s prison, brought the state corrections system once again under federal scrutiny. In October 2016, the Justice Department launched an investigation into physical and sexual harm by both guards and prisoners, corrections officers’ use of excessive force, and poor living conditions throughout the prison system. They found astronomical levels of violence, including rape; a staffing shortage of over 2,000 corrections officers and supervisors; frequent overdoses; and widely available weapons.

And while they did find evidence of decrepit prison buildings—broken locks and cameras, failing plumbing and electrical systems, mold and pests—federal investigators warned that the problems with Alabama prisons ran far deeper. “New facilities alone will not resolve the contributing factors to the overall unconstitutional condition of ADOC prisons, such as understaffing, culture, management deficiencies, corruption, policies, training, non-existent investigations, violence, illicit drugs, and sexual abuse,” investigators wrote in their final report. “And new facilities would quickly fall into a state of disrepair if prisoners are unsupervised and largely left to their own devices, as is currently the case.”

Nevertheless, the state’s top leadership has fixated on prison-building their way out of their problems, starting with former Gov. Robert Bentley’s 2016 plan to borrow $800 million for four new prisons, and continuing Ivey’s massive construction effort. But until now, those plans have failed, tanked first by legislators skeptical of the financing schemes, then by a coalition of civil rights advocates, college students, and landowners near proposed prison locations who, earlier this year, successfully pressured banks (including Barclays of London) to pull out of a deal in which private prison company CoreCivic would have built two prisons and leased them to the state for 30 years.

“There’s so many levers that the state can use to reduce the number of people who are incarcerated.”

Critics of the plan point to the need for cultural shifts in the Alabama Department of Corrections and drastic changes in sentencing laws and practices. “There’s so many levers that the state can use to reduce the number of people who are incarcerated,” explains Lauren-Brooke Eisen, director of the Brennan Center’s Justice Program. “They can focus on compassionate release. They can focus on ensuring that people 65 and older can carry out the rest of their sentence at home. Or the governor could issue clemency. The state could focus on diverting people from the prison system who just don’t need to be there.”

It doesn’t look likely. One of those potentially more effective changes —a modest bill that would make recent sentencing reforms retroactive, allowing certain prisoners to apply for re-sentencing—was tabled by the legislature in the same special session in which they passed the prison funding bills.

“Alabama is too poor to go on in the same direction we’ve always gone in, which is to try to rely on prisons, as opposed to investments in people and communities,” Crowder says.  She questions what will happen when the COVID money runs out. “Where are corners going to be cut? Where are services not going to be provided? Where people are going to be hurt?” she asks. “Because the history of our state shows that always happens.”