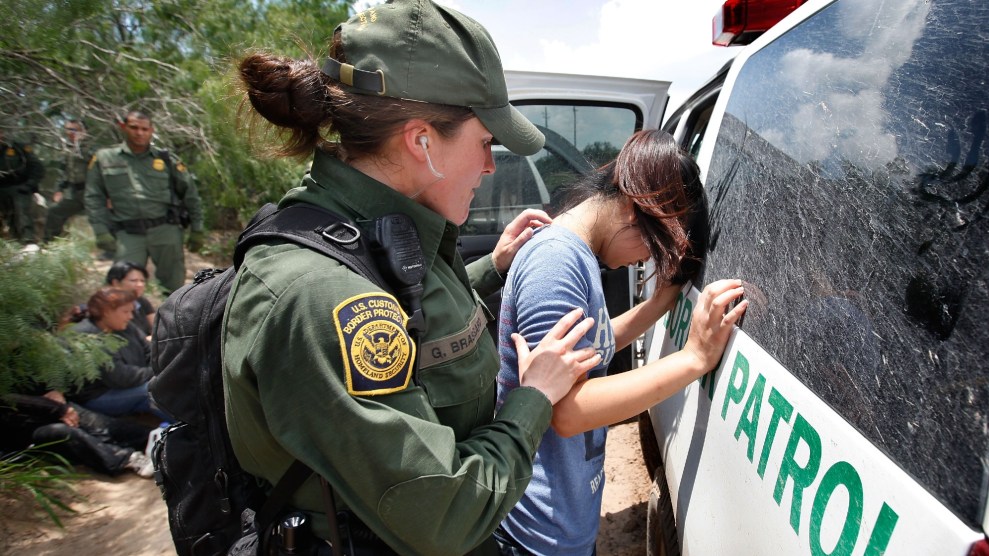 A Border Patrol agent searches a migrant near the US-Mexico border. Scott Olson/Getty

A border patrol supervisor who posted an internal video of a migrant falling off a cliff to their death was recommended for removal. Instead, he ended up with a 30-day suspension. A California intelligence border patrol agent who posted “let’s get back to work, these children arent [sic] going to separate themselves” received only a one-day suspension. An agent who shared the heartbreaking image of a migrant father and child who drowned in the Rio Grande while trying to cross the border by referring to them as “floaters” was allowed to retire with disability benefits.

These are just some of the findings from a House Committee on Oversight and Reform investigation into racist, misogynistic, and violent content posted on secret Customs and Border Protection (CBP) Facebook groups showing that the agency failed to adequately discipline agents. According to the committee’s report, CBP looked into 135 employees affiliated with the groups and determined 60 agents violated the agency’s standards of conduct. But after an internal review board recommended disciplinary action, the agency sidestepped most punishments.

Only two employees were fired and most had their discipline “significantly reduced” from the original recommendation. Fifty-seven agents continue to work in positions of power over migrants, including families with children.

CBP, an agency plagued with a culture of impunity, should not be allowed to investigate its own agents.

We will continue to call on the current administration to hold border agents accountable for their despicable treatment of people. #DefundHate https://t.co/Qq29GM0151

The committee launched the investigation in 2019 after ProPublica first reported on a private Facebook group with 9,500 members called “I’m 10-15.” (The number is a border patrol code for “aliens in custody.”) In the groups, current and former CBP agents joked about migrant deaths and shared doctored images of Congresswoman Alexandria Ocasio-Cortez being sexually assaulted by Donald Trump. The House investigation states that the Trump administration obstructed the inquiry for more than a year and the agency, which had knowledge of the group’s activities since August 2016, didn’t start producing requested documents until after Trump was out of office. The findings point to “a number of failings at CBP, including an inconsistent disciplinary process, a failure to train on and enforce social media policies, and senior leadership’s failure to take appropriate actions.”

The Trump administration obstructed the inquiry for more than a year.

Out of the 60 employees deemed at fault by a chief patrol agent acting as a “deciding official,” two were removed, 43 were suspended without pay, 12 received letters of reprimand, and three were issued alternate disciplinary actions such as suspension with pay. Ten employees had retired ahead of any formal actions being taken. Although the disciplinary review board recommended 24 removals from positions held within the agency or, in some instances, the federal service, only two were carried out, with 18 being reduced to suspensions without pay, one to a letter of reprimand, and another to a verbal warning.

Documents obtained by the House committee also show that two high-ranking CBP officers were members of the “I’m 10-15″ group: former Border Patrol Chiefs Carla Provost, who served between August 2018 and January 2020, and Rodney Scott, who was in charge from February 2020 to August 2021. Provost said she used Facebook to “get an unfiltered gauge on how the rank and file employees of USBP reacted to her statements” in interviews and congressional testimonies. Although she didn’t actively post derogatory content in the group, Provost, the first woman to hold that leadership job, also “did not raise any concerns about activity.” Provost and Scott, as well as chief patrol agents, an executive assistant commissioner, and investigators within the agency’s Office of Professional Responsibility also didn’t face disciplinary actions. Several employees reported that the participation of senior managers “gave them the impression that CBP leadership was aware of the group and the nature of its posts.”

“CBP’s failure to act sooner to impose discipline on employees after senior leaders became aware of the ‘I’m 10-15’ Facebook group, the lack of agency-specific disciplinary guidelines, and the inconsistent punishments it applied all weakened CBP’s ability to hold agents accountable for their misconduct,” the report concluded. In a press release, chairwoman of the committee Rep. Carolyn B. Maloney said she was troubled by CBP’s broken disciplinary process. “CBP’s failure to prevent these violent and offensive statements by its own agents or impose adequate discipline creates a serious risk that this behavior will continue. As we saw with the mistreatment of migrants by Border Patrol agents in Del Rio, Texas last month, systemic behavior problems within CBP persist. CBP must take immediate steps to reform its disciplinary processes, strengthen social media policies and training, and address longstanding issues of poor morale within its ranks.”