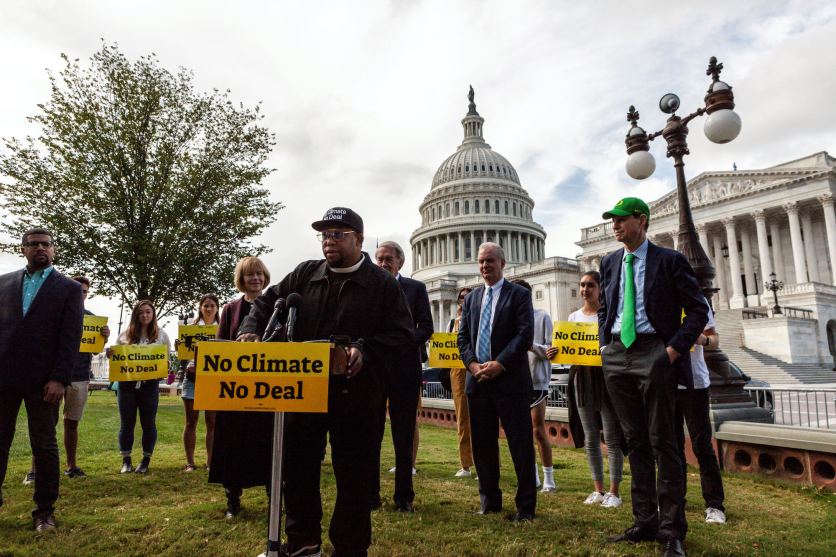 Rev. Lennox Yearwood, president of the nonprofit Hip Hop Caucus, holds a press conference with the Sunrise Movement, Evergreen Action, and several US senators in DC earlier this month.Allison Bailey/NurPhoto/Zuma

The once-ambitious budget bill being hammered out in Congress is, at its heart, a climate bill. And some environmentalists fear it’s going to be gutted.

As Democrats squabble over the details, moderates Kyrsten Sinema of Arizona and Joe Manchin of West Virginia are demanding a major scaleback of the current $3.5 trillion proposal, which most Democratic senators support.

Manchin wants to reduce the price tag by more than half, from $3.5 to as little as $1.5 trillion. What’s more, as the New York Times first reported last month, Manchin, who chairs the Committee on Energy and Natural Resources and has close financial ties to the fossil fuel industry, will play a key role in rewriting the climate-resilience elements of the proposal. From the Times:

The most powerful climate mechanism in the budget bill—and the one that Mr. Manchin intends to reshape—is a $150 billion program designed to replace most of the nation’s coal- and gas-fired power plants with wind, solar and nuclear power over the next decade. Known as the Clean Electricity Performance Program, it would pay utilities to ratchet up the amount of power they produce from zero-emissions sources, and fine those that don’t.

“It’s bullshit that Sen. Manchin, who is so clearly tied to the energy industry and in the pocket of corporate executives, is drafting climate legislation.”

“It’s bullshit that Sen. Manchin, who is so clearly tied to the energy industry and in the pocket of corporate executives, is drafting climate legislation,” says Ellen Sciales, communications director for the Sunrise Movement, a progressive climate advocacy group. “He’s received thousands of dollars from lobbyists and Republican oil and gas executives.”

Biden has urged Democrats to find a budget compromise, but protracted gridlock has raised alarms over the fate of climate spending. Environmental advocates fear that substantial reductions to the proposed investments in climate efforts and infrastructure will render the nation’s climate ambitions toothless at a pivotal moment. “We’re definitely concerned because the fact is that the $3.5 trillion number is already a compromise,” Sciales tells me. “Anyone who lived through this summer of fatal heatwaves and ‘once in a generation’ storms that took people’s lives and homes knows that this is the bare minimum.”

Sinema, meanwhile, has demanded that at least $100 billion in climate funds be stripped from the budget bill. “It is cruel and unfathomable to us that she’s demanding severe cuts to life saving climate legislation considering she represents a state that has lost the lives of over 500 people to the climate crisis since 2020,” Sciales says. “Sen. Sinema is clearly out of touch with her constituents and in the pocket of corporate executives.”

“We’re all here with a clear message,” echoed Van Hollen.

Our message was clear: no climate, no deal. #NoClimateNoDeal pic.twitter.com/BR7t57WOZ4

Despite such proclamations, neither Manchin and Sinema nor any Republican senators have shown signs of budging on their unwillingness to support anything close to the current budget proposal. Melinda Pierce, legislative director at the Sierra Club, expresses some optimism, though. “It would be folly to think that climate programs won’t take a hit in a scenario where we trim down a $3.5 trillion bill to somewhere around $2 trillion,” Pierce says. But she adds that climate is a priority for the White House, congressional leaders, and progressives and moderates in the House, so “I fully expect that the end product from these tortured negotiations will be strong on climate.”

If lawmakers can’t get it together, “Biden will have to go to COP26 with commitments and goodwill, but no concrete action.”

Yet if the Democrats cannot muster the votes to pass a larger budget bill, House progressives have threatened to derail the bipartisan infrastructure bill negotiated separately and passed by the Senate back in August. Such a move, however unlikely, would have climate consequences as well.

Patty Hernandez, executive director of Headwaters Economics, a nonpartisan think tank, says the infrastructure bill includes provisions that will help spur economic opportunity and growth for at-risk communities. Without those programs, she contends, low-income, rural communities and communities of color may lack the resources to adapt to climate change. Passing the infrastructure bill is “necessary if we’re going to help communities that are currently being left behind,” she said in a statement.

A successful overall climate package is also key, advocates say, to America being taken seriously as a climate leader. Biden has touted climate as a cornerstone of his agenda. Early in his presidency, he hosted a climate summit urging world leaders to prioritize emissions reductions. If lawmakers won’t provide the money, Raad says, “Biden will have to go to COP26 with commitments and goodwill, but no concrete action.”

As the globe hurtles toward a point of no return, the opportunity for preventing the worst climate outcomes is looking slim. “If we don’t do it now, it will be possibly too late,” Raad says. “We don’t know the next time there will be a moment where decision makers are willing to take this on again.”