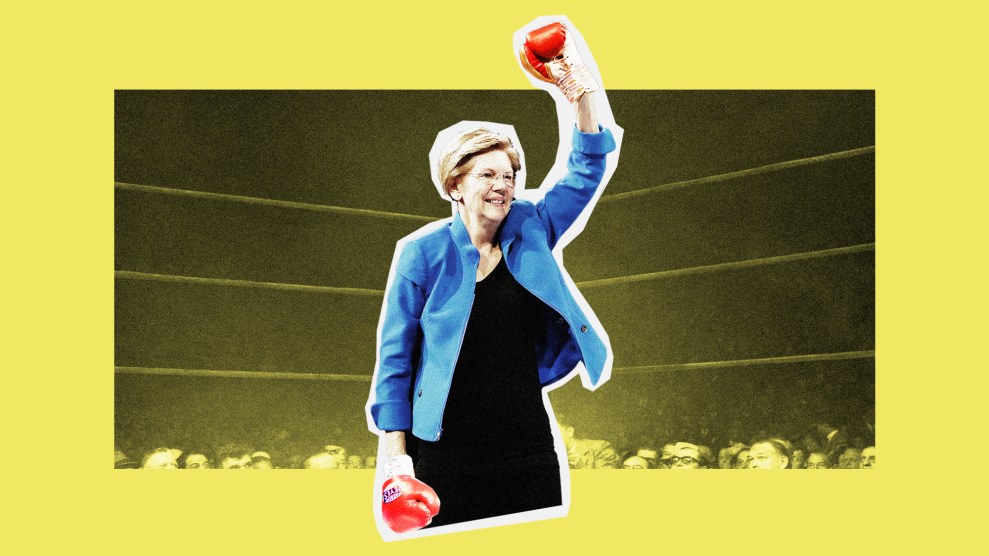 At the time, Sallie Mae was functioning as both a lender of student loans and a debt collector. Because of how federal loans worked at the time, this amounted to a no-lose scenario. When students paid back their loans with interest, Sallie Mae made money. But even if students defaulted on their loans, the company still made money: The government paid Sallie Mae everything the lender was owed, and then the company’s collections arm also pocketed loads of fees from borrowers when it sought to recover the government’s money. It was this double-dealing that Professor Warren had gone on TV to talk about.

“It shouldn’t be the case that Sallie Mae gets to play every hand at the poker table,” Warren told host Lesley Stahl. “How do you lose in a game like that? It’s a great business model, right? I win from here, I win from there.”

Warren’s interview about Sallie Mae’s student debt servicing business, which spun off and rebranded as Navient in 2013, marked a definitive moment in what would become the senator’s multidecade crusade against the predatory business models of student lenders and servicers, and their painful effects on the millions of Americans buried in debt. Over the last few months, that crusade has come to something of an apex as Navient—one of the largest student debt servicers in the country—and two other debt servicers announced that they would no longer handle federal loans. These moves come amid a barrage of lawsuits calling out their bad practices, as well as a looming crackdown on servicers by a Warren protégé who is now in charge of overseeing them at the Education Department.

“It shouldn’t be the case that Sallie Mae gets to play every hand at the poker table,” Warren told Lesley Stahl in 2006.

This moment marks a turning point in the ongoing battles around student debt. To be sure, the view is not exactly rosy for borrowers: The pandemic pause on loan repayment will end in a few months, and the Biden administration has yet to act on campaign promises to cancel up to $10,000 student debt. But Navient’s exit from a business where it earned hundreds of millions of dollars in revenue is a testament to the ways that Warren—and several of her ex-staffers and allies who’ve risen to high-level roles in the administration—have expanded the national conversation beyond stories of crushing debt loads to focus on the often illicit ways in which debt servicers have preyed upon the millions struggling to repay their student loans.

“Sen. Warren has done a tremendous amount of work to shed light on the wrongdoing by actors, like Sallie Mae, in the student loan world, who abused their power and engaged in various violations in terms of their collection activities,” says Deanne Loonin, an attorney at the Project on Predatory Student Lending at Harvard Law School. There is a lot more to be done when it comes to better regulating loan servicers, says Loonin, but Navient’s exit “is the end of an era, and it’s a huge improvement.”

In 2007, the New York attorney general’s office launched an investigation of Sallie Mae and five other student loan companies that soon turned up eye-popping tactics used to ensnare students into debt. Some of Sallie Mae’s employees worked directly at college financial aid offices, where they could push loans on students who had no idea they were getting advice from the company that would profit from their debt. Others staffed university call centers where they gave guidance to students, identifying themselves only as college advisers.

Sallie Mae was also buying gifts and trips for financial aid officers and college officials to encourage them to direct students to their lending services. They even signed revenue-sharing agreements with universities that then placed them on lists of “preferred” lenders distributed to students. After the New York AG uncovered these practices, Sallie Mae agreed to stop and pay a $2 million fine. That was a drop in the bucket: Less than a week later, the company was valued at $25 billion when it inked a deal to be taken private.

Over the next decade, more allegations came out against Sallie Mae and its offshoot Navient. A Treasury inspector general investigation in 2008 found dozens of violations by Sallie Mae’s debt collection arm. An Education Department inspector general audit the next year found Sallie Mae improperly obtained $22.3 million worth of student loan subsidies from the government. In 2012, Sallie Mae spent $35 million to settle a class action lawsuit alleging that the company had built up a portfolio of subprime private student loans, and then hid the damage by pushing students into forbearance. An Education Department audit the following year turned up a host of ways that Sallie Mae was overcharging borrowers. In 2014, the Justice Department arrived at a similar conclusion, finding that Navient had overcharged service members on their loans for almost a decade. As these misbehaviors and others came to light, Warren, who joined the Senate in 2013, was either involved in digging up undisclosed audits of the company or following up with letters pointedly asking for more information or sharp-tongued critiques of the servicers’ executives.

Warren also continued pushing the federal government to better supervise companies—like Navient—that were in the business of debt. In 2007, she wrote a journal article raising alarms about levels of indebtedness and the many ways debt collectors were making it worse. To counteract this, she proposed the creation of a federal consumer protection watchdog. Four years later, her brainchild had become a reality, in the form of the Consumer Financial Protection Bureau. Warren recruited former Ohio Attorney General Richard Cordray to lead the agency. Soon he got to work on student loan issues, collaborating with the Education Department and several other federal agencies to crack down on abuses in student loan servicing, and becoming a key Warren ally on student debt.

In 2017, the CFPB filed a major lawsuit against Navient, accusing the company of lying to millions of borrowers to drive up their repayment costs.

One of Cordray’s primary targets was Navient. In 2017, the CFPB filed a major lawsuit against the company, accusing Navient of lying to millions of borrowers to drive up their repayment costs. Cordray also brought in Rohit Chopra, another Warren acolyte, to serve as the agency’s first formal student loan watchdog. Chopra soon zeroed in on reforming student loan servicers: He put out a report that highlighted borrowers’ challenges negotiating repayment plans with servicers, helped the bureau pass a rule giving it more powers to hold servicers like Navient accountable to federal laws, and called on Congress to employ the more-stringent rules applied to credit card and mortgage servicers on student loan collectors.

“The bureau has received thousands of complaints from borrowers describing the difficulties they face with their student loan servicers,” Chopra told a congressional committee in 2014. He likened the complaints he was hearing to those struggling homeowners had faced in dealing with underhanded mortgage servicers in the wake of the Great Recession and foreclosure crisis. “Like many of the improper and unnecessary foreclosures experienced by many homeowners, I am concerned that inadequate servicing has contributed to America’s growing student loan default problem.”

Now, Chopra and Cordray are in the position to crack down on the servicers they’ve been trying to reform for years, joining a wave of Warren pupils scattered throughout the highest ranks of the Biden administration. Cordray is the new head of the Federal Student Aid office at the Education Department, where he’s already relaunched an enforcement office with a mandate to evaluate misconduct by student debt servicers. The Senate confirmed Chopra as the new director of the CFPB this month; he’s already promised to put improvement of student loan servicing at the center of the bureau’s work, in collaboration with the Education Department. Cordray and Chopra are joined by Warren’s former senior education counsel, now an Education Department senior adviser, and at least four other ed department hires who are CFPB alums.

“There’s a history during the Obama administration of a lot of interest in the student loan area and a lot of aggressive enforcement,” says Harvard Law’s Loonin. “The CFPB did do a lot of great work. So I would say it’s very promising for borrowers to have those people in power now.”

In a speech to attendees of an education finance conference last month, Cordray outlined his plans for raising the bar for student debt servicers. He said in remarks obtained by Politico that when he’d arrived at the Education Department over the summer and started to negotiate contract extensions with the servicers, he was “shocked” that existing contracts barely included any metrics to measure their treatment of borrowers. His office told servicers that this was about to change: Contract extensions would include new performance and accountability metrics.

“Not everybody was thrilled with that position,” Cordray said.

Cordray said he was “shocked” that existing contracts barely included any metrics to measure student debt servicers’ treatment of borrowers.

In fact, over the summer, two servicers that handle a combined 10 million borrowers—the Pennsylvania Higher Education Assistance Agency (often called FedLoan) and the Granite State Management and Resources—announced their plans to stop servicing loans by the end of 2021.

In his speech, Cordray attributed these exits to the prospect of accountability: “Some servicers have decided to exit the program rather than contend with these new realities,” he said.

Less than two weeks later, Navient—which manages the loans of about 5.6 million borrowers—asked the Education Department for permission to also halt its federal student debt servicing business, even though the company had signed a $391 million contract extension just a few days prior. Last week, the department approved Navient’s request. The company will transfer most of its federal student loan accounts to a different servicer, Maximus, by the end of the year.

On Twitter, Elizabeth Warren said good riddance. “Navient has spent years misleading, cheating, and abusing student borrowers,” she wrote. “The Federal student loan program will be far better off without them.”