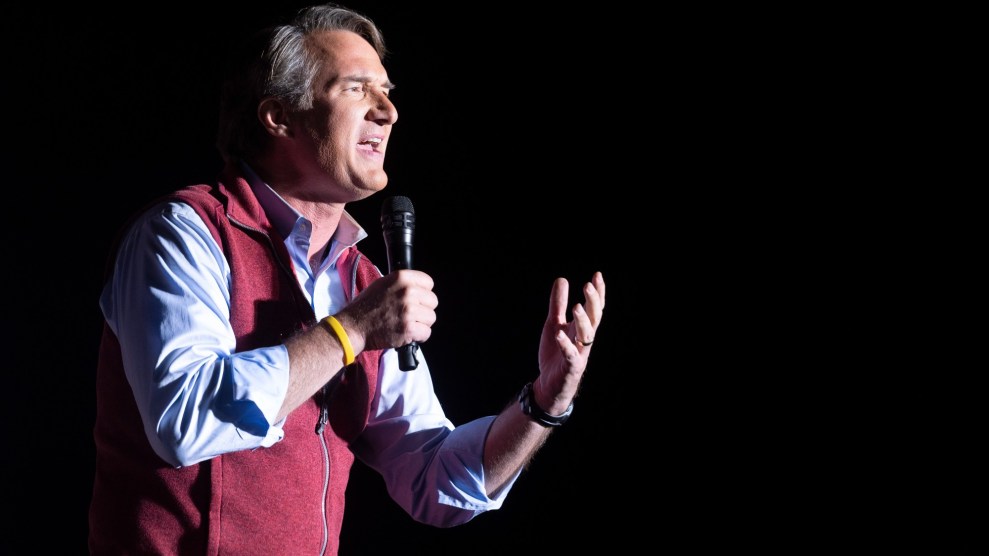 Update, November 3: Youngkin beat McAuliffe in a tight race on Tuesday to become Virginia’s next governor.

At the end of October, I was lucky enough to be off from work and watched more television than usual. Living in Washington, DC, means that we may not have representation in Congress or a governor, but we are still bombarded by political ads intended for our neighbors in Maryland and Virginia. So, I’ve been subjected to advertisements for the Virginia gubernatorial race between Republican Glenn Youngkin and Democrat Terry McAuliffe for the last few months. Naturally, since my time off coincided with the last few weeks before Election Day, the ads for this tight race seemed to be appearing at an increasing rate, and soon it became apparent that Virginia’s Republican candidate has absolutely zero specific policies or ideas.

Head over to Youngkin’s campaign website, and you’ll find laughably thin sections on what this former Carlyle Group executive actually wants to do as Governor. On day one he plans to keep schools open safely five days a week, fire the state’s parole board, and eliminate the grocery tax. But short of real policies about, say, housing, the environment, infrastructure, or public health, Youngkin has found his sweet spot. Nearly all of his campaign ads hammer on about critical race theory—the latest conservative boogeyman and base-mobilizing tactic. And the depressing reality is that in a race that is now too close to call, Youngkin may not need to run on anything more.

Was it too much to hope that conservatives and Republicans would have moved on to another faux moral panic by now? Alas, conservative parents—and grandparents, and distant uncles and aunts—are still concerned that their children might find out that the enslavement of African people was bad. And in the age of intense whitelash to everything from public health restrictions to policing to racial justice protests, it appears that running against an obscure academic theory that says systemic racism has infected every part of American society might work.

Who cares if CRT is not actually taught in Virginia schools? And when something is taught, such as Toni Morrison’s masterpiece, Beloved, a distraught white mother appeared in a Youngkin ad complaining that her son suffered from night terrors after reading the Pulitzer winning novel during his senior year of high school.

CRT is an academic theory taught at the college level that promotes and explores the idea that systemic racism infects every aspect of US society. But the backlash to it has been fierce. Ask a conservative, and they’ll say that CRT is any mention of racial justice and teaches white children to feel bad about themselves. (Despite being the beating heart of Youngkin’s campaign, CRT only gets one mention on the issues page.) Youngkin’s strategy, aided and abetted by other conservatives and Fox News, has been incredibly effective. White people have become so frightened of the theory that it’s led to some, um, interesting moments. Watch this elderly gentleman insist that critical race theory is the most important issue in the Virginia election—but can’t explain what it is.

Perhaps Loudoun County is the place in Virginia that illustrates how effective campaigning on a non-issue really is. The once-rural county—about 45 miles from Washington, DC, and around 100 miles from Richmond—is extremely wealthy, but increasing diversity, plus dog whistles from politicians and Fox News, has turbocharged garden-variety white anxiety. There, the so-called debate over CRT—reminder, it is not taught in Virginia schools—has taken root, with parents holding demonstrations at school board meetings. First, they challenge school curriculums that deal with equity, then they call it CRT, and finally, they try to force school officials to correct the record. Rinse repeat.

If running a white grievance campaign sounds familiar, it’s because it is. Donald Trump sailed to the White House in a similar fashion. The former president never really had any core policies besides pure, uncut racism. For his part, Youngkin has been mealy-mouthed on Trump, both pledging allegiance to him and attempting to distance himself from him, but Trump himself put out a statement on Monday clarifying that he and the candidate were in lockstep. “We get along very well together,” he said, “and strongly believe in many of the same policies.”

Despite not being a national race, Democrats and Republicans are framing tonight’s election as one. “Go out there and fight and work because you’re going to decide this election and the direction of Virginia and the direction of this country for generations to come,” former President Barack Obama told a cheering crowd last month. “Don’t sit this one out.” The Democratic stalemate in Washington has been framed as being bad for McAuliffe, privately Democratic strategists have said Congress’ inability to deliver on Biden’s agenda damages McAuliffe’s message that his party is effective. Tonight’s election potentially foreshadows what will take place during next year’s midterm elections, which will determine whether Democrats can hold their trifecta in the federal government. No pressure, Virginians! Still, Democrats are concerned about McAuliffe’s chances as Congressional Democrats still haven’t delivered on the major issues like climate and paid leave.

What will it mean if Youngkin defeats McAuliffe tonight? Well, it will certainly mean that CRT hysteria is a winner for the Republicans. Indeed, the Trump model has already been successful, particularly in the House of Representatives with newcomers like Reps. Marjorie Taylor Greene (R-Ga.) and Madison Cawthorne (R-N.C.), both of whom have relegated legislation to the backburner while focusing on the culture wars. The difference, of course, is that Greene and Cawthorne ran essentially unopposed in red districts. If a Republican candidate rides a moral panic to the governor’s mansion in a legitimate swing state, the floodgates will open. Forget faking moderation to capture those elusive suburban moms. The ticket to GOP victory and its central strategy appears to be riling up nice white people. If it can work again in Virginia in 2021—it could work in 2024.