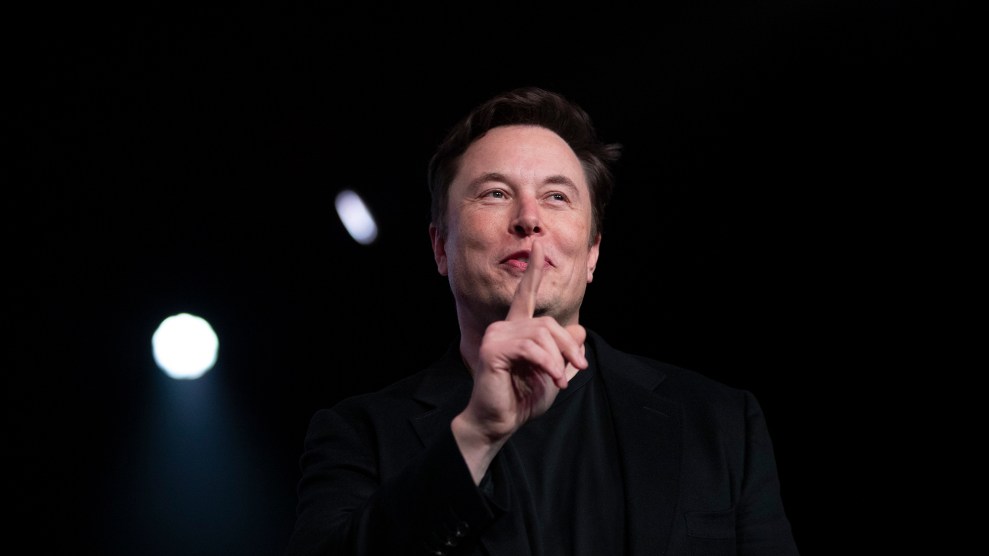 Just what is the world’s richest man up to? Who, after all, makes investment decisions by Twitter poll? Elon Musk, it would seem.

Tesla’s founder, worth $318.4 billion on Sunday (it changes by billions day to day), tweeted on Saturday that he would sell off 10 percent of his Tesla stock if Twitter decided he should. This was his response, one of them anyway, to Senate Finance Committee chair Ron Wyden’s proposed billionaire tax. The legislation, which was considered for inclusion in the Democrats’ reconciliation bill for about five minutes a couple weeks back—Joe Manchin didn’t like it—would have taxed the unrealized capital gains of billionaires for the first time ever.

Taxing unrealized investment profits, if you were to include reasonable terms and exemptions, is a sound policy if you want to take a straight razor to inequality. America’s gaping wealth gap is exacerbated by the fact that the government favors passive capital profits (from stocks, bonds, and other assets) over actual work. We pay income tax on our paychecks no matter what. But investment profits are taxed only when an investor sells stock—or a building, or whatever—and then they are taxed at a far lower maximum rate (about 23 percent with the Medicare surtax) than work income (37 percent).

Wyden’s proposal was, as I wrote at the time, a Hail Mary by a party whose torch-bearer ran for president on a platform of taxing the rich, but wasn’t able to rally the troops to get it done in any conventional way, by jacking up that capital gains tax, say, or eliminating the loopholes that let billionaire dynasties sidestep inheritance taxes.

After Wyden released his plan, Musk poked at it from the sidelines.

According to their own estimates, this tax only covers ~10% of the $3.5 trillion spending bill.

Where will the other 90% come from?

The answer is you.

Among its other provisions, the current Build Back Better bill includes a 5 percent surtax on personal income in excess of $10 million, and another 3 percent on income greater than $25 million. The billionaire tax didn’t make it. But Elon had thoughts.

What does this say, other than that Elon Musk enjoys a good pun as much as the next person? Has he softened his critical position on taxing unrealized gains? Not too likely. Musk is a mischievous fellow. Last week, after World Food Programme chief David Beasley criticized billionaires like Musk for not doing enough, Musk sent out a tweet implying he would sell Tesla stock and give $6 billion to the cause if Beasley could sufficiently prove, right there in the Twitter thread, how $6 billion would solve the world hunger problem.

Some in the media interpreted this as a pledge, but because Musk knew Beasley couldn’t deliver, it was really only a tease. This poll feels like the same thing. If Twitter says no, Musk keeps his unrealized gains—gains that enable guys like him to pay hardly any income tax. If Twitter says yes, sell the stock, it gives Musk cover to cash out a nice big chunk of shares without investors freaking out and driving down the price. For him, it’s a proverbial win-win situation.

Wyden wasn’t having it. “Whether or not the world’s wealthiest man pays any taxes at all shouldn’t depend on the results of a Twitter poll,” he said in a statement. “It’s time for the Billionaires Income Tax.”