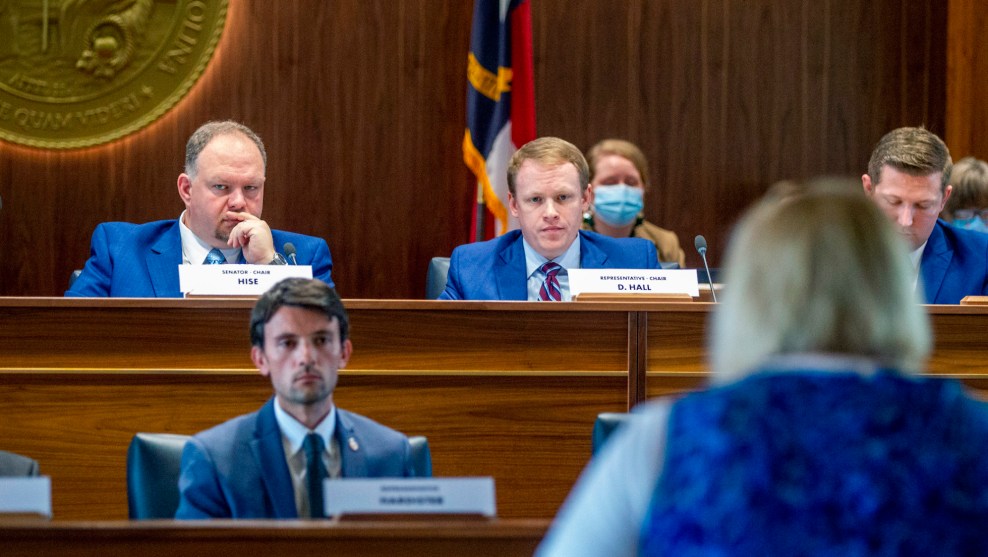 On Wednesday, Republicans blocked a vote on the John Lewis Voting Rights Advancement Act to restore the Voting Rights Act of 1965. The Supreme Court’s gutting of the landmark voting rights law in 2013—and the lack of congressional action to fix it—means that the current redistricting cycle is the first in more than 50 years where states with a long history of discrimination do not have to approve their voting maps with the federal government.

Voting rights advocates are urgently warning that the absence of federal voting rights protections is having a devastating impact on representation for communities of color, erasing decades of hard-fought gains for once-disenfranchised groups and preventing fast-changing demographics from leading to a shift in political power, particularly in the South.

“Not to be melodramatic, but the South is burning,” says Allison Riggs, co-executive director of the North Carolina-based Southern Coalition for Social Justice, which is heavily involved with redistricting and voting rights in the South. “What we’re seeing is beyond our worst nightmares in terms of how bad these processes and outcomes are for voters of color.”

On Thursday, North Carolina’s GOP-controlled legislature approved new maps for the US House that will likely give white Republicans control of 10 or 11 districts out of 14 total in a state Donald Trump carried with just 49.9 percent of the vote in 2020. Democrats will control just three safe seats, with voters of color, who comprised 90 percent of the state’s population growth over the past decade, packed into urban areas like Charlotte and the Research Triangle. The state’s three largest, heavily Democratic counties—Wake, Mecklenburg, and Guilford—will each be split into three different congressional districts to dilute the power of communities of color and enhance the power of white rural areas.

“What we’re seeing is beyond our worst nightmares in terms of how bad these processes and outcomes are for voters of color.”

The only tossup seat is held by a Black Democrat, G.K. Butterfield, who Republicans targeted by adding white voters to his eastern North Carolina district and removing Black ones, changing it from a seat Biden carried by nine points to one that leans Democratic by just two points. The district has long been protected by the VRA (the Supreme Court found that it had been illegally gerrymandered by Republicans in 2011) and diluting the Black vote to oust Butterfield “would have never passed muster under Section 5 of the Voting Rights Act,” Riggs said. House Republicans added Butterfield to their 2022 target list after GOP victories in Virginia on Tuesday.

The congressional, state senate, and state house maps—all approved by the legislature on Thursday—each received an F for partisan fairness from the Princeton Gerrymandering Project, which said that all three maps were likely to decrease the number of districts where communities of color can elect their preferred candidates. The maps will go into effect immediately because North Carolina’s Democratic Gov. Roy Cooper cannot veto them.

The biggest losses for communities of color are likely to be felt at the local level, where redistricting plans rarely face intense public scrutiny.

For 30 years Reives has been a pillar of the community, awarded the state’s highest honor for public service in December 2020, with a son serving in the state legislature. For most of that time he was the only Black member of the county commission.

For weeks this fall Lee County had been considering redistricting plans that preserved Black representation, so Reives was shocked when he walked into a commission meeting on October 4 and found a new plan sitting on his chair, requested by a GOP member of the commission with no public scrutiny or advance notice, that added nearly 700 voters from overwhelmingly Republican and rural parts of the county, leading white voters to outnumber Black ones in Reives’ district for the first time since it was created.

“I immediately knew that it appeared to be gerrymandering to me,” Reives told me. “When I finally looked at the numbers, I knew right away this would not provide any support or advantage for me in district 1.” Reives had always represented the center of Sanford, the county seat, but the new voters came from the deeply red countryside, which had little in common with his urban district. “When you have a couple of miles or more and all you see are Republican signs and Trump flags, I don’t get the feeling that my signs are going to matter in that area,” he said.

He offered to compromise and accept half of the voters Republicans wanted to move in, but was rebuffed by the 4-3 GOP majority. The plan passed two weeks later. “The end game is to try to put Mr. Reives out in the next election,” Democratic Commissioner Cameron Sharpe said at a county commission meeting on October 18. “It is glaringly evident. And I think it is a shame, it’s morally and ethically wrong.”

It took decades of organizing and litigation to elect Black officials in places like Lee County following the passage of the VRA in 1965, but without the law’s strong protections, people like Reives could find their districts wiped out in the next election.

“The American experiment is at risk,” says Eric Holder. “This is the biggest challenge to American democracy—the insurrection, the gerrymandering, the voter suppression, the attacks on professional election officials—all of this puts our democracy at risk to a degree we have not seen since the Civil War.”

Whereas before the Justice Department or a federal court would have had to approve new redistricting plans from the likes of Lee County and would have very likely rejected them if Black voting strength was diluted, under a weakened VRA voting rights organizations can only file litigation after the fact, in cases that take years to adjudicate while elections are held under discriminatory maps.

“There’s not enough resources to cover every district that used to be covered under Section 5 of the Voting Rights Act,” says Riggs. “ We’re going to see a huge loss of representation, particularly at the local level, in 2022 because there aren’t enough voting rights attorneys to litigate all these cases.”

North Carolina was the epicenter of the fight over gerrymandering over the last decade, with its congressional and state legislative maps drawn by GOP gerrymandering guru Tom Hofeller, who passed away in 2018. Hofeller said he was instructed by North Carolina Republicans “to minimize the number of districts in which Democrats would have an opportunity to elect a Democratic candidate.” Democrats held a 7-6 advantage in North Carolina’s congressional delegation even after the Tea Party wave of 2010, but the maps Hofeller drew in 2011 gave Republicans 10 of 13 districts after redistricting occurred.

Districts drawn by Hofeller that segregated Black voters into just two seats to dilute their voting strength statewide were struck down by the Supreme Court in 2017 as illegal racial gerrymandering. Hofeller then drew another 10-3 Republican map using political data instead of racial data. “I propose that we draw the maps to give a partisan advantage to 10 Republicans and three Democrats, because I do not believe it’s possible to draw a map with 11 Republicans and two Democrats,” GOP state Rep. David Lewis, who oversaw the redistricting process, bluntly admitted. (Lewis pled guilty in 2020 to using donor funds for personal use.)

Hofeller’s new maps were struck down in state court in 2019 as an illegal partisan gerrymander, meaning that elections were held in North Carolina under unconstitutional maps for nearly the entire decade. Now Republicans are doing the very thing—creating 10 or 11 districts for Republicans by weakening the voting strength of communities of color—that the courts told them repeatedly not to do during the past decade.

“They’ve made the determination that what worked for them in 2011 can work for them again in 2021, and without the constraints of the Voting Rights Act they feel essentially unbound,” says former Obama administration attorney general Eric Holder, who founded the National Democratic Redistricting Committee in 2017 to challenge Republican gerrymandering efforts.

Republicans are hoping to get away with it this time by claiming they drew the maps “race-blind” and never considered the voting numbers of communities of color. This argument was pioneered by Texas Republicans, who passed congressional and state legislative maps last month that increased the number of districts where white voters are a majority of eligible voters and decreased the number of districts where communities of color are in the majority, even though whites comprise only 40 percent of Texas’ population and 95 percent of population growth in the past decade came from communities of color.

Republicans in North Carolina adopted the same argument. “I will say that we have not looked at any partisan data in drawing this map, nor have we looked at racial data,” said North Carolina GOP state Sen. Ralph Hise, who drew the congressional and state senate maps.

In 2019, the Supreme Court—in a case challenging the gerrymandered congressional districts drawn by Hofeller—said that maps drawn for a partisan advantage cannot be challenged in federal court, but racial gerrymandering cases can still be heard, so the goal of GOP lawmakers seems to be to disclaim any use of race—while surgically limiting representation for communities of color—so their maps can’t be struck down in court.

“They are fully aware that the people most negatively affected by the voter suppression bills they’ve passed and the gerrymandering they’ve engaged in are people of color,” says Holder.

Riggs said it’s laughable that Republicans claim they never considered race when drawing new maps given how the districts drawn by Republicans in states like Texas and North Carolina entrench white GOP power at the expense of communities of color. It’s also impossible to comply with the Voting Rights Act without considering how new maps affect minority voters. Riggs’ group has already filed suit against North Carolina’s legislature for failing to consider race.

“We need the John Lewis Act now and we need the Freedom to Vote Act so folks can’t just hide behind partisan gerrymandering to advance their racially discriminatory intent,” says Riggs. “It’s such an emergency and the failure of Congress to act already is killing us.”

Dems running out of time to stop it

While Democrats have yet to overcome four GOP filibusters to pass voting rights legislation and continue to squabble over Biden’s economic bills, Republicans are passing skewed maps and undermining fair elections in a way that rigs the political system in their favor seemingly every day.

“The American experiment is at risk,” says Holder. “This is the biggest challenge to American democracy—the insurrection, the gerrymandering, the voter suppression, the attacks on professional election officials—all of this puts our democracy at risk to a degree we have not seen since the Civil War. That’s how serious this is.”