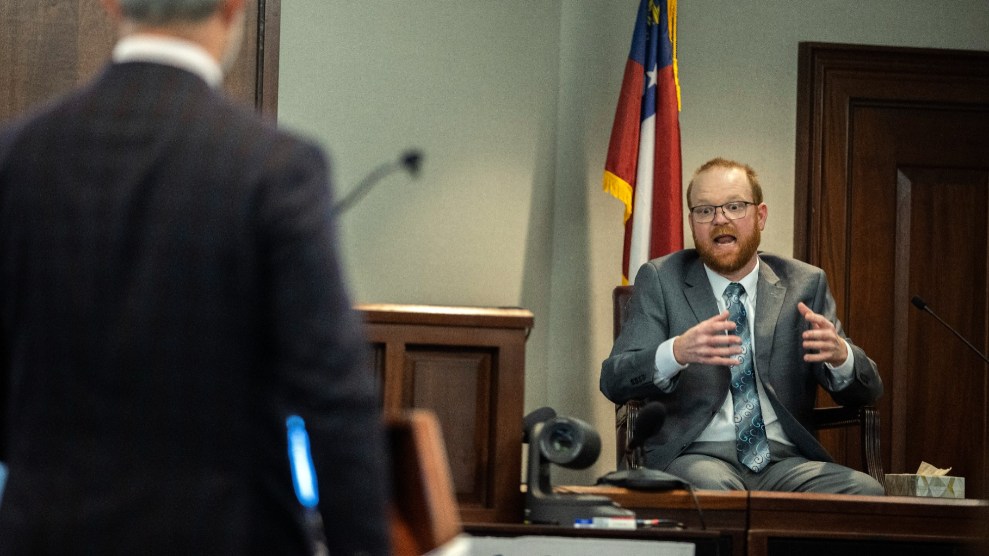 On February 23, 2020, Ahmaud Arbery, a 25-year-old unarmed Black man, was out for a jog in Satilla Shores, Georgia, when he was chased by three armed white men in vehicles. They confronted him, and then he was shot and killed by Travis McMichael.  McMichael’s father Gregory and their neighbor William Bryan were also involved in the killing, and all three are now standing trial for murder in Brunswick, Georgia.

To justify their actions, they are arguing that the killing was self-defense. After all, there had been a string of unsolved robberies in their community, they assumed Arbery must have been responsible—he had been seen on camera footage inside of a house under construction—and simply took it upon themselves to conduct a citizen’s arrest. When Arbery resisted, they claim to have become afraid for their lives. Why would anyone try to escape when being followed by a pickup truck while going for an innocent jog unless they were guilty? There was no choice, they insist; they shot him in order to protect themselves. The defendants were not immediately arrested. Instead, a video of the killing went viral online in May 2020, and there was a national outcry. Eventually, all three men were charged with a litany of crimes, including felony murder and federal hate crimes.

As long as Black people have been in the United States, white fear has been deployed as a powerful and dangerous tool. Black people must learn how to navigate a world that not only encourages but sanctions and valorizes that fear, no matter the cost. But as I’ve watched the trial of the McMichaels father and son, and Bryan, I began to wonder if any limits at all might exist for a white person with a gun who is afraid for his life? The case could not be a clearer example of what happens when every armed white guy has a cop complex and claims to be afraid for his life.

If Arbery had been shot by a police officer, there’s no doubt that the cop would have used the “feared for my life” excuse to justify killing him. Now, it seems as if that claim—not only of fear but also of the self-imposed responsibility to enforce the law—is extended to any racist with a weapon. It’s no longer enough to comply with police officers for even minor transgressions; now Black people are expected to comply with anyone who claims to be afraid of them.

One need only look at another trial, taking place at the same time about a thousand miles north, to underscore the point. Kyle Rittenhouse is facing murder charges in Kenosha, Wisconsin, for fatally shooting two people and wounding another during a Black Lives Matter protest in August 2020. The trial has not been without controversy: Judge Bruce Schroder has been criticized for being partial to the defense, the prosecution struggled to make their case, and Rittenhouse sobbed on the witness stand. During closing arguments, Rittenhouse’s lawyer Mark Richards went so far as to compare the defendant to Rusten Sheskey, the officer who shot Jacob Blake seven times in the back, which is the event that sparked the unrest in Kenosha. His comparison is as chilling as it is revealing of our current moment: There’s not much difference between a cop with a gun and a white guy with a gun.

“Other people in this community have shot somebody seven times and it’s been found to be ok. My client did it four times…” pic.twitter.com/wPas5JwKq1

White vigilantism is so ingrained in our culture that people like the McMichaels father and son and Bryan are seemingly deputized out of the womb and feel free to take matters into their own hands. These three white men have spent their entire lives believing in their own superiority, a conviction that allows them to believe that they can behave as if they were judge, jury, and executioner—even if the only crime they are addressing is some innocent runner who made the mistake of being Black in the wrong place.

White vigilantism is so ingrained in our culture that people like the McMichaels father and son and Bryan are seemingly deputized out of the womb and feel free to take matters into their own hands.

Naturally, the racist dynamics that led to the killing of Arbery were present in the trial as well. Of the 12 jurors who will decide the defendants’ fate, 11 are white and only one is Black. In 1986, the US Supreme Court ruled in Batson v. Kentucky, that prosecutors could not strike jurors based on race. However, the ruling has been open to rather flexible interpretations, and it doesn’t take much to get around it. As my colleague Samantha Michaels wrote, the judge acknowledged the racial bias at play—but also permitted the trial to move forward:

On Wednesday, prosecutors accused the defense attorneys of disproportionately striking qualified Black people from the jury and basing some of those strikes solely on race, which would be unconstitutional. Judge Timothy Walmsley agreed that racial bias was at play in the jury selection. “This court has found that there appears to be intentional discrimination,” he said. But, and here’s the kicker: He said the case could proceed anyway. He argued there were constitutional reasons for striking so many Black jurors.

The hits kept coming. Last week, the Rev. Al Sharpton, the Black pastor who is also a political commentator and activist, was in the courtroom. Kevin Gough, the defense attorney, tried to get Sharpton thrown out arguing that his mere presence intimidated the jury.

The defense attorney in the trial in the killing of Ahmaud Arbery is objecting to Al Sharpton’s presence in the courtroom, claiming it is intimidating the jury:

“We don’t want any more Black pastors in here” pic.twitter.com/LoQhor0WJN

“We don’t want any more Black pastors in here…trying to influence the jury in this case,” he said. The judge pointedly told Gough that this was too much even for him, and he would not be excluding any members of the public from the courtroom without a compelling reason.

“There is no reason for these prominent icons in the civil rights movement to be here.”

Undeterred, and probably because fear of Black people has worked so well in the past, the defense attorney tried a similar tactic again earlier this week. “There is no reason for these prominent icons in the civil rights movement to be here,” Gough said, this time referring to Rev. Jesse Jackson’s presence. “With all due respect, I would suggest, whether intended or not, that inevitably a juror is going to be influenced by their presence in the courtroom.” Another defense attorney, Jason Sheffield, also complained that Arbery’s mother, who was quietly weeping next to Jackson, was also unfairly influencing the jury with her tears.

After 8 days, the state rested its case. Of course, it’s hard to know what the verdict will be. But if these white men walk free, it will be tantamount to using a bullhorn to announce open season against anyone certain armed and righteous white people believe is doing something untoward. And, as long as the defendant can convince a jury of their peers that they were the ones defending themselves against a bad actor, and indeed protecting the community itself from that person’s future actions, well then, that’s perfectly fine.

America has always been a place where the subjugation of minorities is required to maintain the status quo of whiteness. This trial, like Rittenhouse’s, is not just about the specific killings but also reinforces and legitimizes white vigilantism. To argue in a court of law, with a straight face, that one man with the gun who was accompanied by two others, was afraid of a single Black body captures the phenomenon in an unsettling light. “[Gregory McMichael] is now in abject fear that he is about to witness his only son possibly be shot and killed in front of his very eyes,” Gough said during opening statements about the day of the shooting. That seems to be the crux of their argument: The defendants were afraid. I wonder why they didn’t stop to wonder if Arbery, who was being chased by three white men, might have been afraid too.