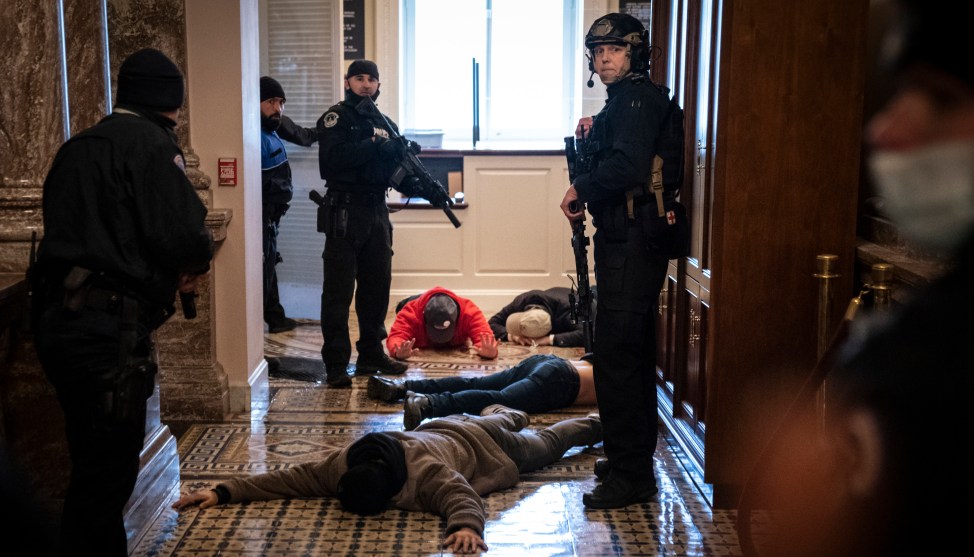 Capitol Police officers detain protesters outside the House Chamber during a joint session of Congress on January 6, 2021.Drew Angerer/Getty

Last month, the Justice Department unsealed the latest case involving gun charges against an alleged participant in the January 6 attack on the US Capitol. Though the case drew relatively little media attention just ahead of Thanksgiving, it further shows that the grim events of that day involved numerous people with guns, despite repeated false claims to the contrary from Republican lawmakers and Donald Trump. The case also adds disturbing new details to the broader picture of January 6 defendants who have espoused political extremism and misogyny and who have allegedly attempted to cover up criminal activity stemming from the siege of Congress nearly a year ago.

According to federal prosecutors, Mark Mazza, 56, of Shelbyville, Indiana, committed multiple crimes at the Capitol, including carrying a pistol loaded with highly lethal ammunition, helping a mob attack police officers, and assaulting police with a baton. Prosecutors say he subsequently lied to authorities about the gun, which he lost during the mayhem:

According to court documents, Mazza brought a Taurus revolver, loaded with three shotgun shells and two hollow point bullets, to the Capitol. The gun was recovered in the West Front Terrace area shortly after 2:30 p.m. Video footage later shows Mazza in the crowd entering the tunnel to the Lower West Terrace doors at approximately 3:08 p.m. Once the glass doors to the Capitol were breached, Mazza held the doors open in an apparent effort to allow rioters to flow into the building. Holding a baton, he assisted the group in pushing toward officers who were defending the area and joined in assaulting them. He actively swung the baton at police, at one point yelling, “This is our f—- house! We own this house!” He then participated in “heave-ho” efforts to apply significant physical force and pressure on the officers. On Jan. 8, 2021, according to the documents, Mazza filed a false police report in Indiana in which he claimed to have lost his gun in an Ohio casino.

Mazza, who faces assault, obstruction, and gun charges, was ordered held without bond by a federal judge and could not be reached for comment.

He “never did get to talk to Nancy” at the Capitol, he told the agents, adding, “I was glad I didn’t because you’d be here for another reason.”

When a pair of Capitol Police investigators interviewed Mazza at his Indiana home in late March, statements he made about his actions on January 6 included apparent references to House Speaker Nancy Pelosi, court documents show. “I thought Nan and I would hit it off,” he told the agents, but he said that he “never did get to talk to Nancy.” He added, “I was glad I didn’t because you’d be here for another reason.”

Mazza further stated to the agents, “I told my kids that if [police] show up, I’m surrendering, nope they can have me, because I may go down as a hero.” He also said, “I’m nonviolent. I’m a patriot and it pisses me off to see where we’re at.”

Before storming the Capitol, Mazza had also assaulted a police officer amid a melee on the Capitol grounds while carrying his concealed gun, according to a search warrant affidavit. The weapon fell out of Mazza’s waistband during the fighting and was recovered from the ground by a police officer. Mazza had been armed with a Taurus revolver known by its branding as “The Judge,” a weapon with an unusual capability for firing various ammunition. Loaded in the gun were two .45 caliber hollow-point rounds and three .410 gauge shotgun shells. “When shotgun shells are fired through such a pistol,” investigators noted in the affidavit, “the effect is similar to the discharge of a short barreled or sawed-off shotgun.”

In other words, Mazza was equipped to shoot people either with a spray of projectiles at close range—which further indicated “an intent to be able to use the weapon against multiple targets at the same time,” according to the affidavit—or with bullets that expand on impact, which enhances their lethality.

After falsely reporting to Shelbyville police that his gun had been stolen at an Ohio casino on January 5, Mazza admitted during the interview with Capitol Police investigators that he had dropped his gun during the January 6 mayhem and was unable to recover it—though he claimed that he’d been trying to stop the violence at the Capitol entrance, rather than participating in it. Court documents detail Mazza’s alleged role in that assault, citing video evidence from surveillance cameras and social media. Investigators say they identified him in part by using video from the siege that Mazza himself had uploaded to Twitter—footage recorded with and posted from the same iPhone he later used to call the Shelbyville police about his gun.

Mazza admitted to falsifying the report about his missing gun, according to court documents, further stating to the pair of investigators that he’d reported it stolen “because in case something happened and if Antifa found it, someone might get killed and my name is all over it.”

The case adds to a pattern of deceit by January 6 perpetrators. Other defendants have also allegedly lied to authorities in attempts to cover up their actions that day in the nation’s capital, including members of the far-right Oath Keepers militia network charged with conspiracy. Oath Keeper Jason Dolan of Florida, who pleaded guilty in September to conspiracy and obstruction of Congress, had allegedly tried to conceal from investigators “multiple high-powered firearms” he owned. Dolan was also accused of participating in a plan in which Oath Keepers allegedly stashed a stockpile of guns at a hotel just outside of downtown DC, for potential use by a “quick reaction force” on January 6 in support of Trump.

Mazza’s case also underscores a stark conclusion from authorities detailed in our previous reporting on the armed insurrection: Law enforcement leaders and agents who struggled to defend the Capitol have said that they perceived there to be far more insurrectionists carrying guns that day than can possibly be known or traced. If Mazza’s gun hadn’t fallen out of his waistband and been recovered by law enforcement, it’s possible he may have evaded prosecution for his full range of alleged crimes during the historic assault on Congress.