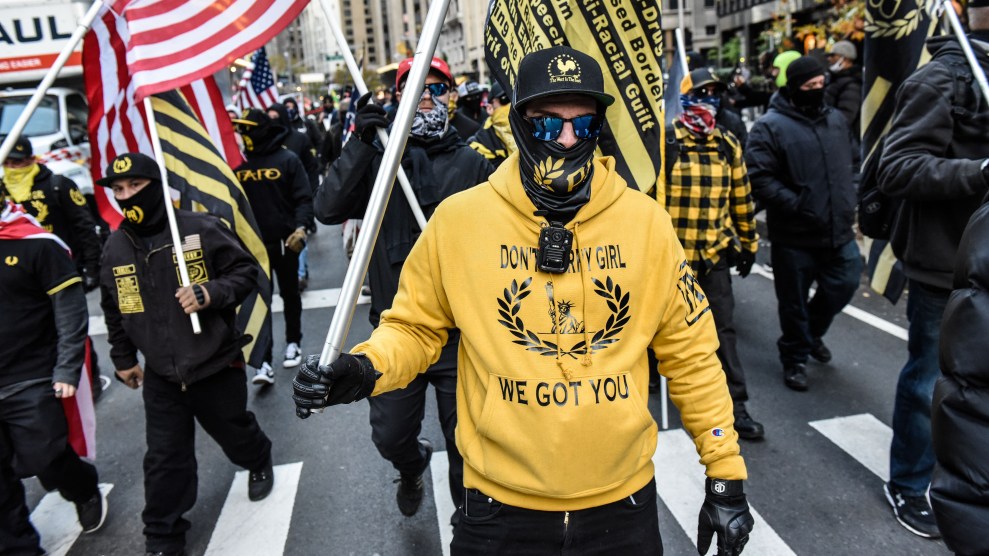 On Tuesday, Twitter rolled out an update to its privacy policy that bans people from posting certain “images or videos of private individuals without their consent.” Many journalists and researchers immediately lambasted the new so-called “private information policy,” including activists who use the platform to spread documentation of far-right movements and their supporters.

“This is absolutely intended to make it more difficult to show our work when calling out identified fascists, and it’s an invitation for Nazis to go back through antifascist accounts and retroactively report shit to get us banned,” tweeted independent extremism researcher Gwen Snyder.

Twitter’s lack of clarity is exploited by extremists.

Within days, those concerns were vindicated. By Thursday morning, Snyder had been locked out of her own Twitter account, and met with a prompt asking her to delete, as she wrote in a Tweet explaining the lockout, a “May 2019 thread documenting a public Proud Boys rally attended by the GOP Philly mayoral candidate & Capitol riot defendant Zach Rehl,” if she wanted to regain access.

Chad Loder, another independent extremism researcher and activist, has identified about a dozen similar Twitter users, including himself, who have been locked out of their accounts under the new policy. Loder has compiled records of posts that triggered the suspensions—they include tweets that capture right-wing extremists planning an assault, contain footage of public rallies, and document Alex Jones’s political contributions, among other things.

When I asked Twitter about Snyder’s ban, they soon responded to say that her tweet was not actually a violation of its rules and that forcing her to delete it was an error. But as Snyder warned, and her experience seemingly demonstrates, the far-right has already taken advantage of Twitter’s new policy to target people who are keeping an eye on them. The Washington Post found one white power and Nazi sympathizer account on the chat platform Telegram that was urging followers to use the rule and report a list of 50 Twitter accounts. I was able to find other far-right Telegram channels sharing the same list, and other accounts pushing followers to file reports with Twitter targeting activist and researcher accounts.

Twitter has argued that its new policy mitigates serious harms that outweigh the damage caused by restrictions on users’ ability to conduct and share research. In a Tuesday post announcing the policy, the company wrote that “misuse of private media can affect everyone, but can have a disproportionate effect on women, activists, dissidents, and members of minority communities.” In an emailed statement elaborating on the claim, Twitter suggested the policy could target users who shared private images of a rape victim, potentially revealing their identity. It’s unclear why Twitter had not already made a specific policy banning such images and videos. A spokesperson did not reply to a request for clarification before publication.

As Matthew Ingram points out in the Columbia Journalism Review, Twitter’s new rules are vague and ill-defined. This ambiguity leaves them ripe for manipulation and uneven enforcement. Images and video of “public figures” may be treated differently under the new rules, though Twitter did not specify what a public figure is or specifically when content of them will be exempt and when it won’t.

The policy seemingly tries to draw carve-outs for people using the platform as a journalistic tool by exempting things like “eyewitness accounts or on the ground reports from developing events” and posts that “add value to the public discourse or are shared in the public interest.” Sometimes, deciding what this is will be clear. Often it won’t be, leaving Twitter to attempt to delineate what is and isn’t in the public interest and what deserves privacy. For now, that lack of clarity is being exploited by extremists.