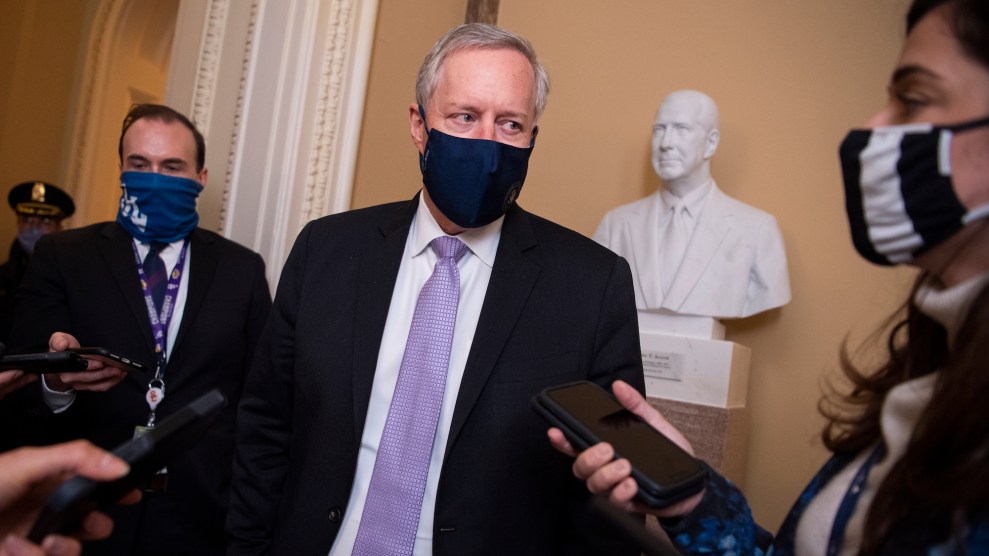 Perhaps it should surprise no one that former President Donald Trump’s scrambling henchmen reviewed a literal, honest-to-god PowerPoint presentation with plans for a coup attempt in early January, as the president’s efforts to retain power despite his electoral loss were reaching a fever pitch. Then-Chief of Staff Mark Meadows got the document sent to him just a day before the Capitol riot; he recently turned over the presentation, titled “Election Fraud, Foreign Interference & Options for 6 JAN” to the congressional committee investigating January 6, according to a letter released by the committee this week. The PowerPoint’s recommendations are staggeringly batshit: Trump, the document said, should declare a national security emergency, proclaim all electronic voting invalid, and ask Congress to decide on a path forward. Vice President Mike Pence, it added, should abuse his ceremonial power to certify the election results to reject electors from “states where fraud occurred” or replace them with Republicans.

A new Washington Post story on Saturday concedes it’s still unclear how widely the PowerPoint was shared, and how seriously it was taken, (Meadows’ lawyer says there is no sign his client “did anything with the document after receiving it by email”) but its reporting still sheds a bit more light on its influence: A person responsible for circulating the presentation, cybersecurity consultant Phil Waldron, spoke with Meadows “maybe eight to 10 times” and was part of a team that briefed several members of Congress on a version of the PowerPoint the night before the January 6 insurrection. Waldron told the Post that his presentation argued there was “significant foreign interference in the election” and recommended “constitutional, legal, feasible, acceptable and suitable courses of action.” (In fact, scholars say there was no legal basis for Pence to intervene in the electoral vote-counting process, as the Post lays out; ballot recounts and legal challenges have failed to turn up any evidence of significant fraud.)

Waldron’s account of his interactions with the White House, together with a 36-page version of the presentation that surfaced online this week and was reviewed by The Post, shed new light on the wild theories and proposals that circulated among the people advising Trump as they worked to overturn his election defeat, causing a crisis at the heart of government. They suggest that Meadows, who also pressed senior Justice Department leaders to investigate baseless conspiracy theories about election fraud, was more directly in contact with proponents of such theories than was previously known.

Waldron, a cybersecurity consultant who specialized in psychological operations during his military career, said that a meeting he and others had with Meadows in the days around Christmas turned to questions about how to determine whether the election had been hacked. He said Meadows asked, “What do you need? What would help?” Waldron said his team developed a list for Meadows with information on IP addresses, servers and other data that he believed needed to be investigated “using the powers of the world’s greatest national security intelligence apparatus.”

This news comes as Meadows is in crosshairs of the congressional committee investigating January 6. Its chair, Rep. Bennie Thompson (D-MS), has cited the PowerPoint as one of the many reasons committee members want to question Meadows.