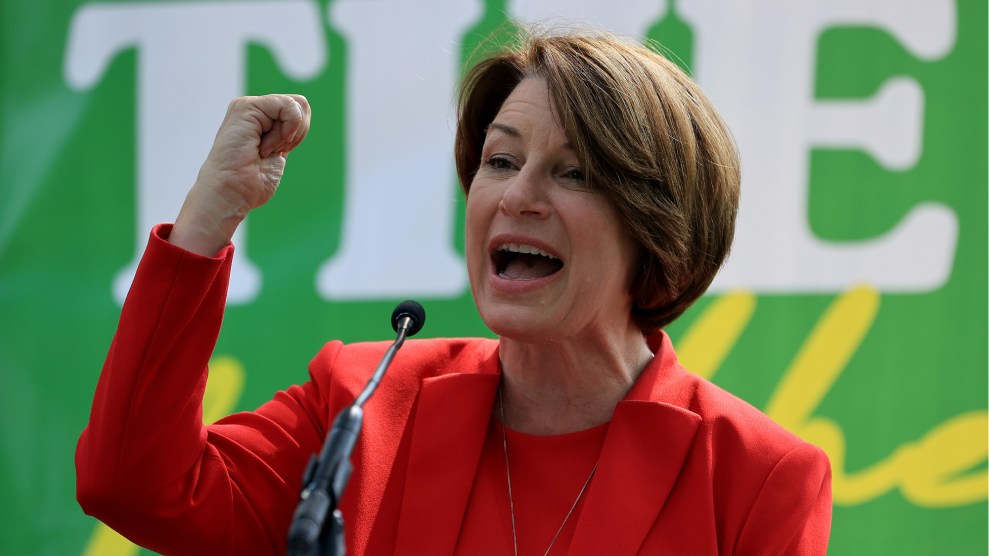 Sen. Amy Klobuchar (D-Minn.) addresses a rally at the US Capitol in September.Chip Somodevilla/Getty

On Wednesday, the Supreme Court heard arguments on the constitutionality of Mississippi’s Gestational Age Act, a controversial state law banning almost all abortions after 15 weeks of pregnancy. Through their lines of questioning, the court’s six conservatives strongly indicated that they’re likely to overturn—or at least gut—the court’s seminal ruling in Roe v. Wade, which prohibited abortion bans before the point of fetal viability, or about six months.

On Sunday’s Meet the Press, Sen. Amy Klobuchar (D-Minn.) said the pro-choice response should come from her congressional colleagues: Turn Roe’s protections into federal legislation, taking Americans’ access to abortion out of the justices’ hands altogether.

“I think the most sane route to get this done right now would be to bring this up before the US Senate to codify Roe v. Wade into law,” Klobuchar told host Chuck Todd.

The 1973 Roe decision barred individual states from enacting restrictions that outlawed abortions before fetal viability. In one scenario, the Supreme Court could weaken abortion rights by undoing this portion of Roe, allowing Mississippi and other states to decide when in a pregnancy to cut off abortion access. (Earlier in the term, the Supreme Court heard arguments on the constitutionality of Texas’ Senate Bill 8, an even more extreme abortion ban that outlaws the procedure after six weeks.)

A Congressional move to codify Roe would preempt states from constraining or virtually erasing abortion rights. It would also keep abortion access from varying wildly across states, which would mean more of the prohibitively long drives and flight driven by the Texas law—and would force others, especially poorer people, to carry unwanted pregnancies to term. Klobuchar said on Sunday that a federal abortion law would prevent that inequitable “patchwork” of laws, noting that some pro-choice Republicans have signaled support for the idea.

Democrats have floated the idea of passing a federal law enshrining abortion rights for years: In 2007, during his first presidential campaign, Barack Obama promised that it would be “the first thing I’d do as president.” In the 2020 Democratic presidential primaries, candidates including Klobuchar cited pro-choice legislation as a key part of their reproductive rights platforms, and President Joe Biden has said that his administration is “committed to codifying Roe v. Wade.” A group of House Democrats have drafted legislation doing just that—which passed the House in September. But its progress has stalled in the Senate, where the bill needs a filibuster-proof 60 votes to pass. With Democrats’ slim majority in the upper house, Klobuchar said, she and her colleagues are “looking at the rules” regarding filibusters.