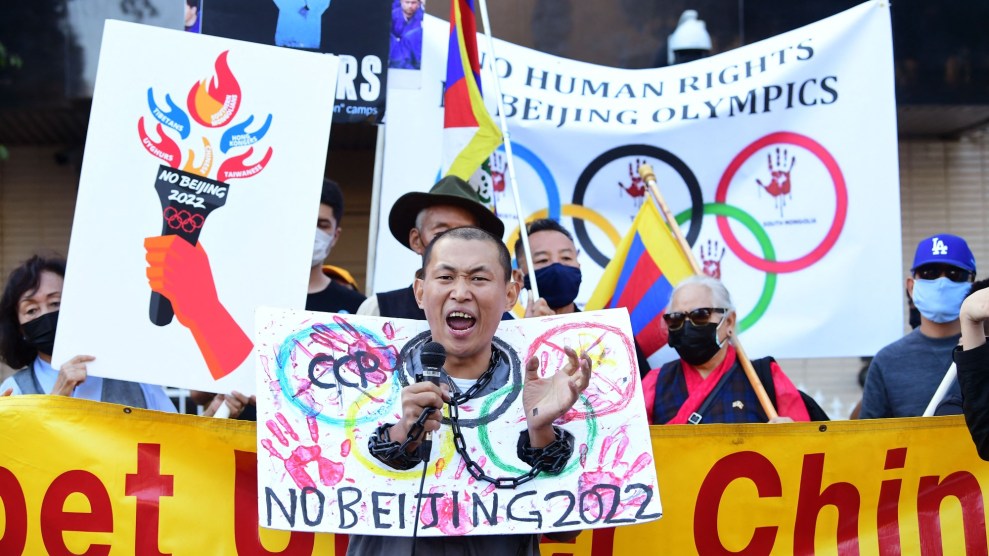 Once the International Olympic Committee awarded the 2022 Winter Olympics to Beijing more than six years ago, Mandie McKeown and her colleagues at the nonprofit International Tibet Network got right to work. McKeown had already gone through one pre-Olympics cycle of protesting China’s human rights abuses, back when Beijing hosted the 2008 Summer Games. Now, as the ITN’s executive director, she set out to get a meeting with the IOC and the Olympics’ corporate sponsors.

Instead, McKeown told me, her group was met with radio silence from “basically” every sponsor. As for the big, United States-based brands like Coca-Cola, Airbnb, and Procter & Gamble? “No response whatsoever,” she said. “They’ve entirely ghosted us.”

Other activists and human rights researchers also have not been able to make much headway. Yaqiu Wang, a senior researcher on China at Human Rights Watch, said the companies will often deflect from specific issues and speak generally about their support for human rights—if they respond at all. “None of the responses are satisfactory in any way,” she said.

The IOC invited controversy by awarding the Olympics to Beijing a second time, even as the Chinese government has grown increasingly more repressive under leader Xi Jinping. Back in July 2001, as China was being considered as host for the 2008 Games, the deputy mayor of Beijing said the Olympic bid would help promote “not just the city’s development, but the development of society, including democracy and human rights.” No one seriously believes that this time around.

“None of the responses are satisfactory in any way.”

But it was clear even in 2008 that Chinese officials had other issues on their mind. Jules Boykoff, a political science professor at Pacific University in Oregon who has written four books about the Olympics, told me one thing China did actively promote when it hosted the Summer Olympics was its sophisticated surveillance network, which presaged the government’s dystopian monitoring and imprisonment of Uyghur Muslims.

Now Uyghur advocacy groups, working alongside Tibetans, Hong Kongers, and other targets of Beijing’s authoritarian crackdown, are fighting to have a voice ahead of the Olympics. “Beijing brings a whole slate of different activists, and they’re bolstered by the human rights groups that are now making sports a bigger part of their portfolio,” Boykoff said.

Their first opportunity to get a substantive response from the Olympics’ corporate sponsors came in July when representatives from five IOC sponsors—Airbnb, Coca-Cola, Intel, P&G, and Visa—were called before the Congressional-Executive Commission on China, an independent government agency that monitors China.

At the hearing, every company reiterated its commitment to human rights; they all even cited the same United Nations “guiding principles” on business and human rights. But only one company, Intel, even mentioned the Chinese government’s repression of Uyghur Muslims in its prepared statement. Everyone else avoided the issue, instead simply affirming their support for athletes and reminding the commission that sponsors have no say in selecting the host city. Members of Congress, who form part of the commission, were not pleased.

Only one company, Intel, even mentioned the Chinese government’s repression of Uyghur Muslims in its prepared statement before the Congressional-Executive Commission on China in July.

“This is one of the most pathetic and disgraceful hearings in which I’ve participated in my eight years in the Congress,” Sen. Tom Cotton (R-Ark.) said. “It’s clear to me that every one of you were sent here probably with directions directly from your CEOs and your board not to say a single cross word about the Chinese Communist Party.” (When asked to comment for this article, the five companies either declined or did not respond.)

Rep. Tom Malinowski (D-N.J.), the former head of the State Department’s human rights bureau, co-signed Cotton’s rant, signaling just how dispiriting the companies’ positions were. “I rarely in life agree with Senator Tom Cotton,” he said. “I’m pretty much in full agreement with him today.”

Zumretay Arkin, program and advocacy manager at the World Uyghur Congress, watched the hearing from Munich, where she is based. The way the sponsors contorted themselves to not directly condemn China was “quite laughable,” she said, though Intel’s executive vice president and general counsel Steve Rodgers was “somewhat daring” for at least acknowledging and agreeing with the State Department’s conclusion that China is committing a genocide. (Rodgers also said the US Olympic Committee “has asked the sponsors to not drop our sponsorships because, in their view, doing so would hurt the athletes.”)

Arkin echoed the frustration of other activists seeking to at least start a dialogue with the Olympic sponsors, but said she was pleasantly surprised by the response from the German National Olympic Committee and one German sponsor: the insurance company Allianz. In the fall, the World Uyghur Congress conducted a meeting at Allianz headquarters in Munich with a survivor of the Uyghur concentration camps and a former Tibetan political prisoner. The Allianz representatives were “very respectful,” she said, and promised to follow up with the IOC. “There was a big difference to the approach Allianz had compared to the rest.”

Getting a response from most other sponsors, let alone the IOC, has been more difficult. After a months-long effort to get the IOC to confirm that Olympics merchandise was not being made with forced labor, activists from the Coalition to End Forced Labor in the Uyghur Region were denied their request for a meeting. An email from the IOC’s head of human rights, which the New York Times reported earlier this month, said the IOC “will not be able to engage in a dialogue this time as a result of differences in approach, including regarding scope, process and confidentiality.”

The IOC requested a private conversation in which the committee would just listen and not share any new information with activists. Wang called the proposed conditions “almost farcical.”

“It’s already off the record, and you only want it to be a ‘listening exercise,'” she said. Sponsors she has contacted through Human Rights Watch have been similarly circumspect about speaking publicly. “We sent letters, and they don’t respond publicly to our letters,” she said. “Some of them have said they would respond off the record in a private conservation.”

What makes the IOC’s refusal to engage more frustrating for activists like the International Tibet Network’s McKeown is how predictable—and avoidable—the controversy has been. “They knew exactly what they were stepping into because we have been here before,” she said, citing the committee’s decision to award the Games to Nazi Germany in 1936, China in 2008, and Vladimir Putin’s Russia in 2014. “They really, seriously, don’t care.”