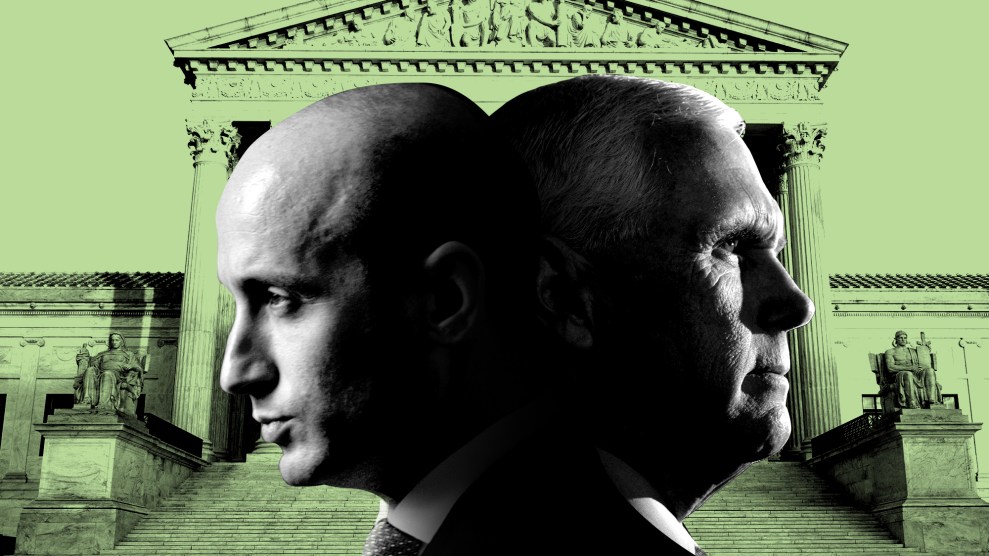 As a surge in omicron variant cases of Covid spurs a record high number of new infections and a rise in hospitalizations, including among children, the Supreme Court is set to decide on whether the Biden administration’s workplace vaccine mandates announced in the fall can go into effect. On Friday, the justices will hear arguments in cases challenging two vaccine policies the administration proposed: one that requires businesses with 100 or more employees to ensure their workers are fully vaccinated or get tested on a weekly basis; the other that mandates full vaccination for health care workers at federally-funded facilities. These measures would cover an estimated 100 million workers.

One of the most vocal opponents of the measure has been America First Legal (AFL), a conservative group launched in April 2021 by Stephen Miller, former President Donald Trump’s senior adviser and the architect of his draconian immigration policies. The AFL was created, according to its website, to “oppose the radical left’s anti-jobs, anti-freedom, anti-faith, anti-borders, anti-police, and anti-American crusade” and “defend our citizens from unconstitutional executive overreach,” which apparently includes vaccine mandates. Its board of directors has a number of bold-face names from the Trump administration including, former White House Chief of Staff Mark Meadows and former Acting Attorney General Matthew Whitaker.

Miller told the Wall Street Journal his goal was “to develop and launch a conservative answer to the ACLU” and bragged the organization’s funding came from donors “who can write very large checks.”

Miller told the Wall Street Journal his goal was “to develop and launch a conservative answer to the ACLU” and bragged the organization’s funding came from donors “who can write very large checks.” Among the group’s first efforts was joining forces with Texas Attorney General Ken Paxton in April to sue the Biden administration over border policies, and then to tap Texas Agriculture Commissioner Sid Miller as a plaintiff in a lawsuit attempting to halt debt relief for farmers of color.

In November, the nonprofit partnered with the conservative think tank Texas Public Policy Foundation’s Center for the American Future to sue the Biden administration over “tyrannical and unconstitutional vaccine mandates,” claiming, among other things, that OSHA doesn’t have the power to “try and end pandemics.” At the time, Gene Hamilton, who served as counselor to the attorney general in the Department of Justice under Trump and leads AFL’s legal challenges, said in a statement the federal mandates threatened the livelihoods of hardworking Americans. After the Sixth Circuit Court of Appeals reversed in December a decision by the Fifth Circuit blocking the enforcement of the policy, AFL joined the Chicago-based Liberty Justice Center and the Pelican Institute for Public Policy, in New Orleans—both conservative public interest law firms—in asking the Supreme Court to stay the ruling.

AFL has also sued the Biden administration at least twice on behalf of individual federal employees who refuse to get vaccinated. In the cases of an assistant US attorney, who claimed she was threatened with losing her job and retirement benefits, and an employee with the Department of the Navy, the complaints argue both clients had acquired natural immunity against Covid after recovering from an infection, and that the vaccine mandate for federal employees violates the clients’ “right to be free from the forcible injection of unwanted and unnecessary medication.” On Wednesday, the organization released what they described as a “know your rights” toolkit to help federal employees who choose not to get vaccinated seek exemptions and defend themselves against potential disciplinary actions.

Miller’s AFL is not the only organization led by Trump White House officials and allies to be attacking the vaccine mandates and joining forces at the Supreme Court. Earlier this week, former Vice-President Mike Pence announced his advocacy group Advancing American Freedom (AAF) had filed an amicus brief with the Supreme Court opposing the policies. AAF urges the court to act now “to prevent the irreparable harm to Americans, to jobs, and to constitutional governance that will be done if OSHA’s mandate is permitted to take effect.” It asserts that the Biden administration is trying to use OSHA to “accomplish an end that it has been unable to persuade Congress to support: the mandatory vaccination of the American public.”

The organization, which Pence started last year, vows to protect American freedom against encroachment by the federal government and hamper “anything that would threaten America’s standing as the greatest nation on the face of the Earth.” In recent months, the group has asked the Supreme Court to overturn Roe v. Wade and filed an amicus brief in another high-profile case about state funding for religious schools. Members of the group’s advisory board include the executive director of Heritage Action, Jessica Anderson, who, as Mother Jones revealed, has bragged about the group’s work in drafting voter suppression bills across the country. Another member of the board is Russ Vought, former director of the Office of Management Budget under Trump and founder of the Center for Renewing America, a conservative group that published a 34-page long handbook on how to combat Critical Race Theory in communities. Vought is also on the board of America First Legal.

One of Trump’s attorneys in the impeachment trial Jay Sekulow—who lost a brother to Covid and says he still thinks the Chinese government is responsible for the virus—is also involved in a case challenging the mandate. His organization, the American Center for Law and Justice (ACLJ), which was founded more than twenty years ago also as a conservative alternative to the ACLU, filed a lawsuit in November on behalf of the conservative think tank the Heritage Foundation. In a broadcast conversation with Sekulow, the Heritage Foundation President Kevin Roberts said this was the first time the group was filing a lawsuit as a plaintiff in any case, adding that “the future of America depends upon The Heritage Foundation and the ACLJ.”

This week, the ACLJ filed a brief asking the Supreme Court to block the implementation of OSHA’s vaccine-or-testing mandate, arguing it is unconstitutional and poses a burden on workers that will have to pay for weekly testing since employers are not required to cover those costs.

The Supreme Court is expected to issue a decision on whether to block or allow the Biden administration to implement the vaccine requirements pending litigation. Although the justices have previously allowed state Covid vaccine mandates, they might arrive at a different decision regarding those imposed by the federal government.