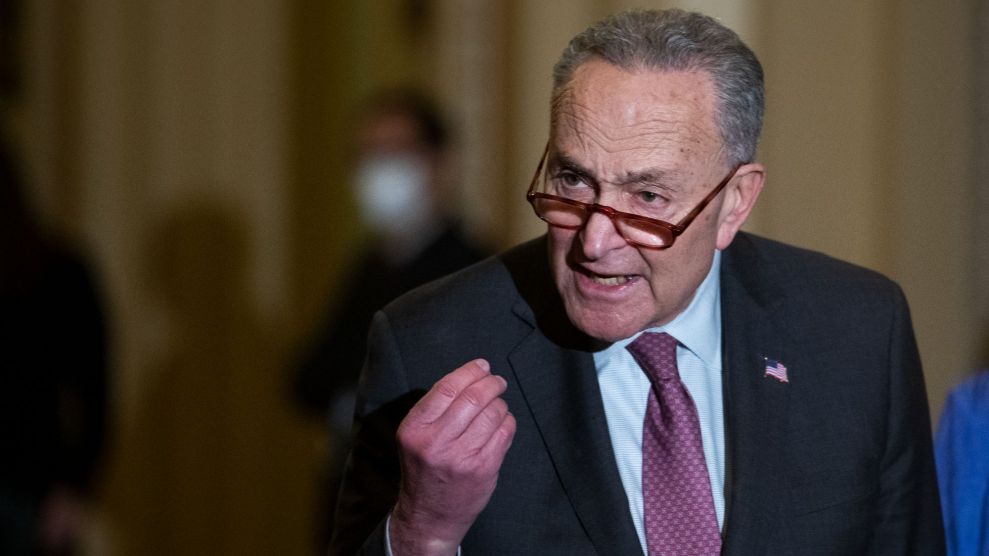 In a letter released on Monday, Senate Majority Leader Charles Schumer (D-N.Y.) announced that the Senate would vote to amend the filibuster by Martin Luther King Jr. Day, January 17, if and when the GOP stands in the way of major voting rights legislation.

Schumer made his announcement three days before the first anniversary of the January 6 Capitol riot. In his letter, Schumer drew comparisons between the insurrectionists who stormed the Capitol and Republican officials who have seized on Trump’s election lies to enact anti-democratic legislation across the country.

“Let me be clear: January 6th was a symptom of a broader illness—an effort to delegitimize our election process,” Schumer wrote, “and the Senate must advance systemic democracy reforms to repair our republic or else the events of that day will not be an aberration—they will be the new norm.”

Schumer: "how can we in good conscience allow for a situation in which the Republican Party can debate and pass voter suppression laws at the State level with only a simple majority vote, but not allow the United States Senate to do the same?" https://t.co/bQJZGDPyN9

Without a change to the filibuster, it will be virtually impossible for Democrats to pass the Freedom to Vote Act or the John Lewis Voting Rights Advancement Act, which together would protect early voting, establish Election Day as a public holiday, expand mail-in voting, and generally help to safeguard the right to vote. Democrats view the twin bills as necessary to curtail the anti-democratic actions taken by Republican state legislatures to gerrymander congressional maps and suppress the vote of Democrat-leaning minorities.

But in order to reform the filibuster, Democrats will have to convince two notorious buzzkills: Sens. Kyrsten Sinema (D-Ariz.) and Joe Manchin (D-W.V.).

Sinema already seems like a hard no. In mid-December, she publicly stated that she opposes filibuster reform to protect the right to vote. Manchin, who co-wrote the Freedom to Vote Act, has made it clear that he won’t consider abolishing the filibuster under any circumstances, but he’s dropped some enigmatic hints that he might support less radical changes to the rules. Democrats will most likely need both of them on board for any rules change, or one of them and Sen. Lisa Murkowski (R-Alaska), the only Republican to vote for the John Lewis Voting Rights Act.

As a result, Democrats are hoping to use the first anniversary of the January 6 Capitol riot to pressure Manchin and Sinema. However, it’s unclear how effective such a lobbying campaign will be. Only a few weeks ago, Manchin withstood fierce criticism from the party before going on to single-handedly tank Biden’s entire domestic agenda. Simply put, the odds aren’t high.