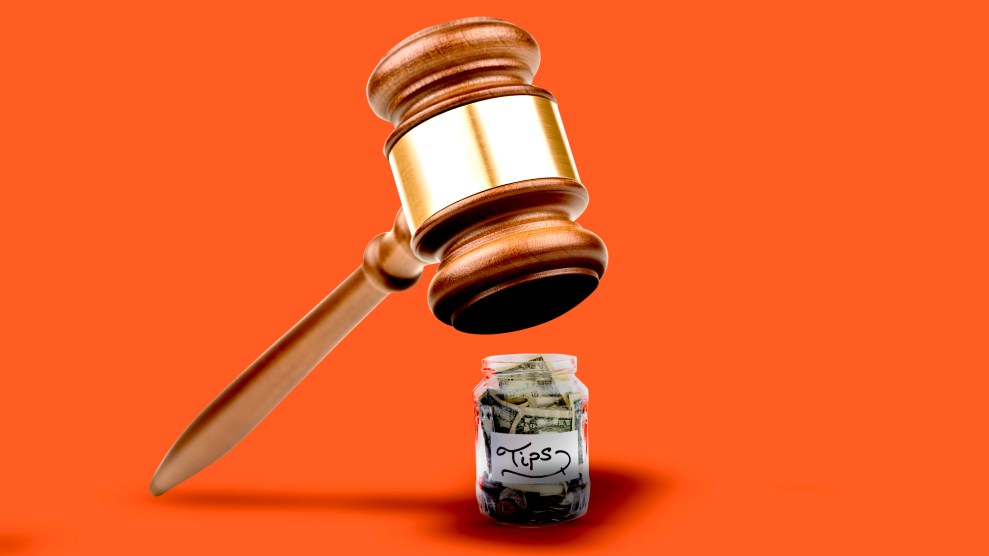 The average tipped food-service worker clocks well over 40 hours a week, including weekends and holidays, for an average of $24,000 a year. Benefits are practically non-existent, and there’s no disputing that the pay is low: many employers, including some of the most profitable food firms in the country, aren’t required to pay tipped staff more than $2.13 an hour out of pocket. What is in question, according to a brief filed last week by the organization One Fair Wage, is whether those rates are constitutional.

Restaurant worker advocates One Fair Wage first filed suit in September, arguing that the wage policies of Darden Restaurants—the world’s largest dining conglomerate outside the fast-food industry, the single biggest employer of tipped workers in the US, and the owner of chains like Olive Garden and Longhorn Steakhouse—drive sexual harassment and race-based pay inequity among female and nonwhite tipped staff. Those disparities, the group says, violate the “disparate impact” clause of the 1964 Civil Rights Act.

The suit was dismissed by the 9th Circuit Court of Appeals, which sits one rung below the Supreme Court on the judicial ladder, on the basis that One Fair Wage wasn’t employed by Darden or directly harmed by its pay policies. But if that’s the case, One Fair Wage argued in Friday’s brief, then no one can sue Darden at all: the company requires workers to sign arbitration agreements that bar them from suing their employer in federal court, effectively exempting them from class-action lawsuits. Anyone “aggrieved” by the policies, the group says, has standing to sue under the letter of the law.

In the brief, the group also argues that, since Darden pays all its servers and bartenders the lowest wage allowed by local law—a “subminimum” wage filled out with customer tips, sparing the employer a huge chunk of labor costs—workers of color tend to make less than their white counterparts, a claim backed by both academic research and surveys specific to Darden restaurants. That pay disparity, One Fair Wage says, is so inequitable as to violate marginalized workers’ civil rights.

“In essence, this means that Darden…  requires its customers to directly set the wage levels…and they can bring conscious and unconscious racial and other biases with them when they dine out,” Jason Harrow, an attorney representing One Fair Wage, said in an email. And the corporation’s tipping policy, he said, “means that managers have an incentive to ignore, indulge, or even encourage sexual harassment.”

If the appeal is denied, Harrow told food and agriculture outlet Civil Eats, Darden will essentially have “written itself out of federal law.” Instead, One Fair Wage, which backs the elimination of sub-minimum wages, argues that Darden could take relatively simple measures to pool and share tips, or charge a service fee that would be used to alleviate the financial impacts of harassment and discrimination.

Darden Restaurants did not respond to a request for comment.